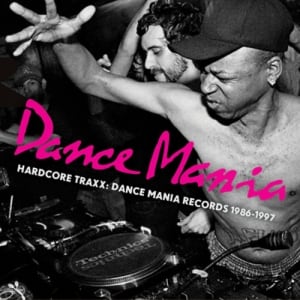 [xrr rating=3.5/5]Joan Rivers channels Bobcat Goldthwaite in one of the more obnoxious tracks on Strut’s anthology of Chicago’s influential Dance Mania label. A vocal that sound just like that unholy entertainment duet punctuates the beats of Jammin’ the House Gerald’s “Black Women.” This is one of the most garish descendents of call and response traditions on Strut’s 24-track. As resistible as that sounds, after the initial horror wore off, I appreciated its audacious hook.

Headphones make a difference. Piped through tinny laptop speakers, the crudeness sticks with you, but through a decent pair of headphones, beats that were persistent pinpricks gain much needed heft, and bass lines that barely registered assume their rightful dance floor authority. With beats this hard, you don’t need cocaine to appreciate them, and I bet they sound even better on 12″ vinyl singles, which is how this music was originally distributed.

The collection launches with a bang that is either furiously danceable or gratingly obnoxious, depending on your state of mind and booty. Hercules orders you to “jack your body” over an aggressive beat that makes me want to turn it off, not get up and boogie. I love dance music, but Dance Mania came along during the era of house music, never my favorite era for shaking. The relentless beat of disco evolved, but as beats per minute increased, danceability did not necessarily follow. Early tracks like “House Nation” by the House Master Boyz and the Rude Boyz of House have a choppy beat that suggests a dance-floor rival to Max Headroom. Sure, Max Headroom was good ‘80s television, but do you want your automatons stuck on funky?

After a brash start Hardcore Traxx settles into a groove that highlights Dance Mania’s dreamier, almost wistful side. Handclaps drive the hardest beats in Vincent Floyd’s “I Dream You,” its mood more Tangerine Dream meets Paul Hardcastle. Strong Souls’ “Twinkles” is mood music for mild ass shaking. The pace picks up again with 3.2.6.’s “Falling (Armando’s House)” but doesn’t kick into that hard groove until near the end of the set, when it follows through on a surprising influence: punk.

Can a dance instrumental be anthemic? That’s what Robert Armani’s “Ambulance” sounds like, its violent pace a punk-disco hybrid that’s one of Dance Mania’s quintessential tracks. Up-tempo numbers like this and DJ Deeon’s “Hypnosis” are the kind of authoritative hits that made the label’s reputation and influenced contemporary dance music from Daft Punk, who namedrop Dance Mania, and Teddybears, whose punky dance hooks are a logical extension of the Dance Mania aesthetic.

There a reason the set ends with Top Cat’s “Work Out.” It has all the in-your-face elements of Dance Mania’s most relentless beats. Call and response lines like “aw shit,” “beat that ho” and “bang that shit up” are a crude but apt delivery system for heart-racing beats that demand a visceral response. The various artists assembled on Hardcore Traxx send out a whistle that not everybody will hear. But its strongest beats bypass cerebral functions and go straight to your wiggle center.