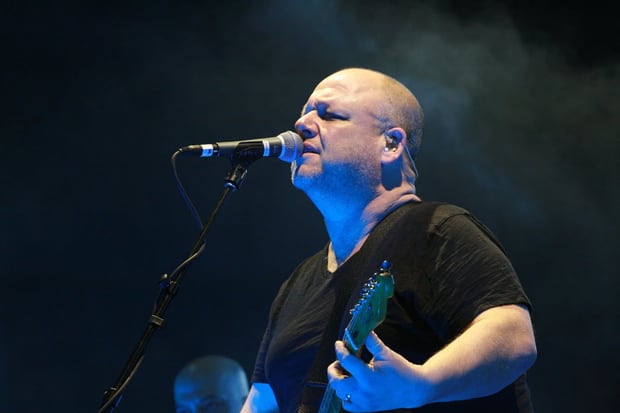 I’d never seen the Pixies before and after last week’s show at Portland’s opulent Arlene Schnitzer Concert Hall I still feel as if I haven’t seen them.

Kim Deal is slowly becoming my white whale. I’ve seen Frank Black live a few times solo and when I was in high school I caught Joey Santiago and David Lovering together as the Martinis when they opened for another band. So in some way, the Frankenstein pastiche of the Pixies I’d created for myself played in Portland the other night and, goddamn, was it boring.

The best Pixies songs grab you by the guts or by the balls. Who hasn’t screamed along to “Tame,” gotten the shivers during “Where is My Mind?” or experienced happy bubbles whilst singing along with Black on “Here Comes Your Man”? Pixies music is visceral music, but the band that showed up to play the Schnitz seemed no longer able to feel; they simply went through the motions. It was how a Pixies show should sound, but not how one should feel.

Can Kim Deal really be the missing piece? I never got a chance to see the Pixies back when they were active in the late ‘80s and early ‘90s, but I want to believe their shows were full of wild energy. This show was flat, like a band of mercenaries going through the motions to reach the end of the setlist and collect their paycheck. It made me sad.

I’ve read articles blaming Black and his cavalier attitude for the diminishing excitement at Pixies shows, about how he really doesn’t give a shit about much. He certainly didn’t care to take the time to address the crowd at all during the 31 song set, instead barreling his way through the music, his vocals almost inaudible in the mix. Santiago’s guitar sounded good, but he more or less stood there looking bored. Lovering now looks like he could drum for Jimmy Buffett. I would mention “guest” bassist Paz Lenchantin from A Perfect Circle, but there is a chance that she’ll be gone by the time this review is published.

The band played most of the songs you would want at a Pixies show, launching into things with “Bone Machine,” “Wave of Mutilation” and “U-Mass.” The sold-out crowd stood up and sang along for the first few songs, but about seven or eight songs in, the band lost the audience. With no energy to feed from, the people in the auditorium stood stock still with arms folded. Maybe a gentle nod of the head at times. Yeah, the music critic next to me sang along and danced, but by the time awful new songs like “Bagboy” appeared, even he seemed to lose interest.

So, I ask again: Can Kim Deal really be the missing piece? Something was clearly gone and although she tried, Lenchantin couldn’t replace Deal’s background vocals or spiky bass notes. The Breeders are putting on their own reunion tour and I hear it’s downright joyous. The only joy I felt the other night is when the band finished a mercifully short one-song encore and the house lights came up.

“Debaser” aside, I got to hear all the Pixies songs I wanted that night at the Schnitz. I forced myself to sing along, even if it was only half-heartedly. I certainly didn’t scream. My skin didn’t break out in goose pimples. No feeling of elation burbling into my gut. When the show ended, Black walked to the edge of the stage and waved, but did not thank us. The music critic next to me rushed into the aisle and ran towards the stage in a vain attempt to touch the man. Everyone else around me was already looking for their jackets, some even grousing about the money they paid for such a slick but soulless performance.