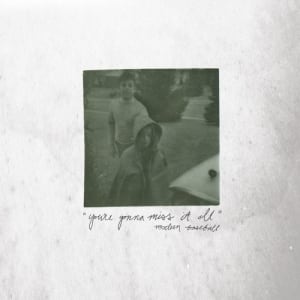 [xrr rating=3.25/5]“My head is on the verge of exploding/ No amount of aspirin or pizza could help this from hurting.”

If that line made you cringe, then Modern Baseball’s You’re Gonna Miss It All probably won’t be for you. The Maryland quartet is a proud member of the recent burst of emo bands that worship at the altar of American Football and Cap’n Jazz. Unlike peers La Dispute and the World Is a Beautiful Place & I Am No Longer Afraid to Die, Modern Baseball focus on the little things in their songs. Outside of one vision of the apocalypse on “Broken Cash Machine,” Brendan Lukens weaves stories of the mundane. On album centerpiece “Rock Bottom,” Lukens worries about his garlic breath, wonders if he’s too hyped up on coffee and lunges for a slice of pizza. This is music for the suburban weekends of twenty-somethings. If you fall out of the teens/early 20s demographic then You’re Gonna Miss It All might come off as whiny, and Lukens’ honesty might be uncomfortable. But if you’re in the right mindset, Modern Baseball’s tales of teenage hormones ruining literally everything becomes an engrossing, if an uneven, experience.

Modern Baseball is a young band (Lukens is currently 21 and attending Drexel University), so weekends filled with sexual frustration are quite fresh in every member’s mind. Some of the songs here seem to come straight from “Freaks and Geeks.” Lukens obsesses over no less than four girls, attends a mass of terrible parties and nervously checks his phone every other second. He’s well aware of how neurotic his delivery can be, and his self-deprecating lines occasionally wade into self-loathing. “Sharp as a tack but in the sense that I’m not smart, just a prick,” he sings on “The Old Gospel Choir.” The stronger songs lace Lukens’ lyrics with pop-punk sensibilities. Modern Baseball can write catchy-as-hell choruses if they want to. Though a steely guitar opens “Broken Cash Machine,” the sub-two minute song packs in some of the album’s most infectious moments. The also aforementioned “Rock Bottom” might become an anthem for apathetic and awkward lovers with cries of, “To hell with class, I’m skipping,” and the chorus is an almost too perfect, “But it’s OK cause whatever/ Forever.”

To contrast pop-punk bliss, a few songs have a country twang, and they fall flat. “Going to Bed Now” chugs along without much purpose, and the stripped down near-folk of “Notes” makes Lukens’ already incredible levels of awkwardness rise to unnecessary levels. If there’s anything that offsets his uncomfortable anecdotes, it’s the small voices that flutter around the main lyrics—such as a random “fuck it”—that can be heard like parts of Lukens’ sleepy conscious. But Lukens’ lyrics are the main focus here, and unfortunately the rest of the band only gets a few moments to really shine. Sean Huber is a talented drummer, but only a handful of songs rely on him to keep the momentum clipping along. Jacob Ewald doesn’t get to show off his guitar muscle often, but thankfully he doesn’t need to. His best moments are made up of more intimate picking, mixed with Lukens’ singing. “Timmy Bowers” and album closer “Pothole” are devastating songs thanks in part to Ewald’s gentle plucking.