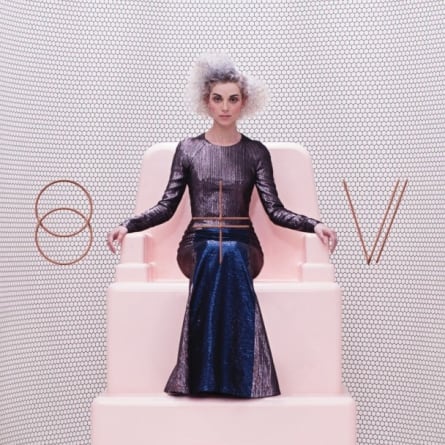 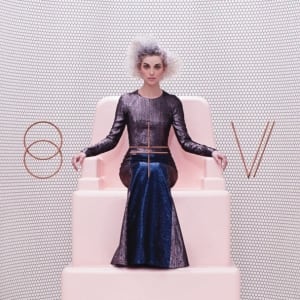 In concert, St. Vincent’s Annie Clark is defined by contrast. She is a dynamic performer without being an extravagant one, as prone to standing serenely while she tears intricate patterns from an uncomplaining guitar as she is to stage dive or shriek her throat out. On record, Clark is no different, though it’s less obvious how carefully she balances her music, to the point where it seems like she’s deliberately hiding its complexity. St. Vincent, her fourth album (and first for new label Republic Records) is perhaps her most accomplished to date in purely technical terms, though it doesn’t have the immediate charm of the preceding Strange Mercy. For all its noise (and make no mistake, there is a lot of distortion here), St. Vincent is a slow burn of an album.

Despite that, the first impression of St. Vincent is extreme agitation. The buzzing atmosphere and Clark’s wordless, coughing refrain on opening “Rattlesnake” instantly take you into a panicking, sweaty headspace, feeling both isolated and overcrowded. Then again, that paradox is something that permeates the 11 tracks of the album, from the repetition of “If I can’t show it, you can’t see me,” in single “Digital Witness” to her sedate tones as she calmly sings “Runnin’ down the highway like a psychopath/ All the flames and fury, honey, at my back,” on “Psychopath.” But agitation can also arise from irreconcilable elements conflicting with each other and St. Vincent has that in spades.

Technically, this may be Clark’s slickest record yet. The production of John Congleton (whose schizophrenic resume includes everyone from R. Kelly to Modest Mouse) renders each piece of instrumentation on the album bare, which was sometimes an issue on St. Vincent’s first two overstuffed albums. It also sounds the least organic of her releases thus far, full of distortion and electronic treatments. Still, there’s no doubt whatsoever that Clark is the mastermind here; the queasy guitar squalls at the end of “Birth in Reverse” could come from no one else. Neither could its lyrics like “Oh what an ordinary day/ Take out the garbage, masturbate/ I’m still holdin’ for the laugh.”

Indeed, Clark has often been an enigmatic lyricist, as evidenced by a verse in “Prince Johnny” “Remember the time we went and snorted/That piece of the Berlin Wall that you’d extorted/ And we had such a laugh of it/ Prostrate on my carpet.” But periodically throughout St. Vincent, she comes across more direct than ever before, most of all on the gorgeous “I Prefer Your Love,” an ode to her mother including the heartbreaking “But all the good in me is because of you/ It’s true.” While it’s one of the highlights of the album, the Sinead O’Connor electronic strings and isolated drumbeat also make it an anomaly. Most of St. Vincent feels directly descended from Clark’s 2012 collaboration with David Byrne, the fitfully interesting Love This Giant. Most particularly, the muscular horns of “Digital Witness” could have fit easily in its track listing, but they also click neatly with the increased R&B elements at play here. The bewitching rhythm of “Huey Newton” and the increased use of compact beats overall show Clark expanding in a new direction, even if it’s not immediately as gripping as some of her previous work.

Still, this is a major step for one of the most compelling songwriters working, yet another sign of her creative fearlessness. St. Vincent has moments of unadulterated beauty like the closing ballad “Severed Crossed Feelings,” a song that mixes visceral, violent imagery with an absolutely breathtaking melody and a simple, affecting vocal take. It also has touches of deliberate crudity like the riff to “Regret” that only highlight the complexity Clark weaves elsewhere. It’s an album that feels like it owes influences to no one but itself and doesn’t need to.