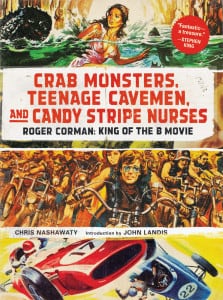 [xrr rating=4.0/5]When a young Ron Howard made his directorial debut in 1977’s schlocky road movie Grand Theft Auto, executive producer Roger Corman refused his request to hire much-needed extras, telling him, “If you do a good job for me on this picture, you’ll never have to work for me again.” Though the B-movie kingpin has had many repeat collaborators throughout his 60 year career, this cheapskate consolation epitomizes his prolific, styrofoam-propped career. Corman rarely sought to make art, instead he aimed at mass-producing cheeseball drive-in fodder and then transitioned to helm B-movie production companies that leeched off popular trends and anticipated shifts in the market better than major Hollywood studios. But while few of his films contain much in the way of critical merit, Corman’s knack for spotting talent gave many modern day cinematic giants their start.

Crab Monsters sifts through every phase of Corman’s career, from his early directorial efforts on corny foam-rubber science fiction fare like Swamp Women, A Bucket of Blood and Creature from the Haunted Sea to his modern-day production work for the SyFy channel on cheap CGI spectacles like Dinocroc vs. Supergator and Sharktopus. But Corman’s career proves far more diverse than goofy creature features, as it includes biker movie phases, a drug trip movie, his respected series of Vincent Price-acted Poe films, bamboo women’s prison exploitation flicks, slasher movies and all manner of knock-offs meant to swim in the wake of big budget blockbusters.

While the book certainly lavishes praise upon Corman, it’s far more earnest than it is fawning. As likeable as he is, Corman has often butted heads with his cast and crew, such as when his production company lost out on Easy Rider, the definitive counterculture film of its era, because his cohorts didn’t trust the film’s infamously drug-addled and reckless director Dennis Hopper to stay on schedule. Elsewhere, it’s clear that, while Corman offered myriad opportunities to rising stars, he often cared more about saving a few dimes than helping out other underlings on the crew. By contrast, they would often have to hide when he came around lest he see too many money-sponges on the set and start writing pink slips. But most of these recollections relay a wild-eyed excitement for how nascent filmmakers managed to put out pictures on shoestring budgets and ridiculous time crunches, such as when Corman managed to shoot The Little Shop of Horrors with Jack Nicholson in a mere two days.

Disappointments are also part of this book, such as Corman’s one attempt at serious filmmaking, 1962’s racial violence-themed The Intruder. The project nearly got the cast and crew run out of a tinderbox Missouri town and ended up being the only film where he lost money. And his long-anticipated return to the director’s chair with 1990’s major studio-released Frankenstein Unbound also landed with a thud. But on the whole, Corman is portrayed as a savvy businessman who knew how to turn a sizable profit on a minimal investment in schlock. While he has a talent for film pacing and for realizing that a lurid title and splashy movie poster or VHS cover was more important to the bottom line than quality content, he has handled moviemaking like an industrial enterprise. As anti-establishment and corner-cutting as he was, there’s an irony that the likes of Cameron’s gargantuan-budget CGI landmarks or Scorsese’s impeccable attention to detail were spawned from working with a filmmaker who often recycled set pieces, relied on tattered costumes and spray paint and even re-released films under different titles when they bombed.

Although Corman leaned heavily on boob-bearing exploitation films in the ‘70s and slasher flicks in the ‘80s, Crab Monsters credits him for being a pioneer of integrating women into positions of power in fimmaking. Some of that can be chalked up to the fact that they would work for less money, but the firsthand accounts of those under his employ point to his tendency to inject his left-leaning philosophy into much of his work. That might be a stretch. Later in the book, it’s hard to see how his blatant knock-offs of Star Wars (Battle Beyond the Stars), Jaws (Piranha) or Jurassic Park (Carnosaur) are anything but meritless cash grabs. As his career has shifted primarily to cable trifles with ludicrous special effects, it’s clear that there won’t be any more Oscar-winning actors and directors coming out of his stable. But his influence on cinema in his first few decades is undeniable, and he earned his 2009 lifetime achievement Oscar for that reason.

Essentially, Crab Monsters puts Corman on a pedestal, but one that’s un-whitewashed and shamelessly chintzy. Throughout a career that spans over 400 films, he may have been so miserly that he’d re-use unmarked stamps, but also so generous as to give anyone with a strong work ethic and a scrap of talent a chance to prove themselves. Nashawaty successfully argues that the cinematic landscape would be unrecognizable without this man. Though the book can be a bit repetitive and clumsy at times, the slick design and lavish images more than make up for this. Crab Monsters is a polished gem, even if Corman himself wouldn’t splurge on such quality.