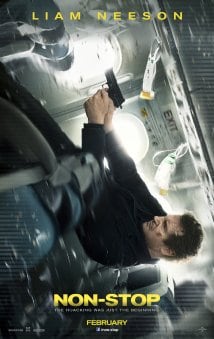 [xrr rating=2.25/5]Non-Stop performs all of the requisite tasks of the now-annual Liam Neeson Action Movie, which is to say that there are gunshots and Liam Neeson is in it. That is not to say the film doesn’t try something different, however. The premise, of Neeson’s air marshal, Bill Marks, being slowly implicated in a mid-air extortion attempt by an unknown passenger as bodies begin to drop, shrinks the scale from his jet-setting rampages in the Taken movies and, ideally, bottlenecks the material enough to wring actual tension out of the scenario, something Neeson’s increasingly superhuman screen persona lacked in the movies that launched this bizarre phase of his career.

Trapped in a plane’s cabin at 35,000 feet over the Atlantic, Neeson’s natural gravitas and sense of control is rendered impotent, and there’s something to be said about how weak he allows Marks to become. Established in curt, broad genre outlines of alcoholism and loneliness, Marks is so shaky at the best of times that he, an air marshal, even exhibits a fear of flying. When he boards a flight to London in plain clothes, the camera picks up on the looks he receives from flight staff who know him. The film projects these misgivings about his state well before something goes wrong. And when it does, when Marks begins receiving texts threatening to kill a person on-board every 20 minutes, all eyes start resting on him as the one responsible for the chaos.

As executed by Jaume Collet-Serra, however, Non-Stop never experiences the peaks and valleys of a good thriller, the moments in which suspense becomes unbearable and then lets up just enough to relax a viewer and get them to miss details. By this point Neeson is a guarantee in these roles, so taut that despite the age settling in on his face he looks to be made of sinew. But his intensity is never matched, nor even effectively contrasted, by anyone else in the cast, all of whom receive as blunt an introduction of traits as Marks but get no chance to show their convictions. Jen (Julianne Moore), the passenger who sits next to Marks, comes closest to behaving as a human being: she’s fussy and flirty, collaborating with Marks as others align against him even as she levels the most devastating criticisms of his growing paranoia and instability. Everyone else, rendered as interchangeable as possible to better facilitate the mystery of who might be tormenting the plane, is scarcely better than anonymous, which spoils the mystery by making any reveal meaningless.

The film is the very definition of serviceable. No truly egregious scenes, nor any that seem destined to live in the mind. Its shots display just enough detail to move things along, and the mounting mob mentality on the plane makes things just uncomfortable enough that the movie only occasionally has to brood upon its ignorance and, in the case of a distrusted Muslim doctor, its racism. As with most thrillers in which the unknown villain exerts seemingly omniscient control over every aspect of a plan and seems to be able to anticipate the reactions of every bystander, the “why” of the scheme is a letdown, slamming on the plot’s brakes to put forward a simplistic message that ill-advisedly attempts to add some meaning to a movie that never develops a subtext (outside the inherently political premise). Late in the film, the unmasked villain marvels at how easy it was to not only set up his plan but to cast a law enforcement official as the public scapegoat, but Non-Stop makes this feel less like a comment on the vulnerability of our security state and much more like a simple case of the bad guy having been blessed with a script that makes him all-powerful.