Having somewhat anticipated pop art with his career of elevated kitsch, Vincente Minnelli demonstrates with The Courtship of Eddie’s Father how easily his old-fashioned style fits into a contemporary context. Its opening shots are of wipe transitions darting through images of New York’s skyline as an off-screen voice delivers ad copy that syncs with the visuals, before the camera finds itself inside the apartment of Tom Corbett (Glenn Ford). As Tom boils coffee on the stove, the speaker lets the audience know what brand it is, then gently chastises Tom for grabbing the kettle without pot holders and even makes kissing sounds as if lovingly tending to his wounds. Aesthetically, the camera’s smooth, brief pans and the perfectly ordered apartment look like any of Minnelli’s melodramas, but the self-reflexive audio track suddenly presents the studio director’s work in a new light.

The phrasing of the film’s title offers the first clue of its real intentions: though Tom may be the character around whom the plot circles, it is Eddie (Ron Howard) who truly drives the film, his complex emotional core the crux of its classical and modern sensibilities. The film opens as Tom prepares to go back to work after taking time off to deal with his wife’s death, but if Tom has worked through the superficial, visible stages of grief, Eddie has yet to even realize he should be grieving. Dropped off at school, Eddie asks his father if his mom is really dead with a tone of inquisitiveness, not pain, and later he even speaks of telling his friend about her death with excitement, as if he were going to catch his pal up on an episode of “The Twilight Zone.” Upon discovering one of his goldfish floating at the top of its tank, however, Eddie goes ballistic, emitting a bloodcurdling shriek that obviously has little to do with the fish. 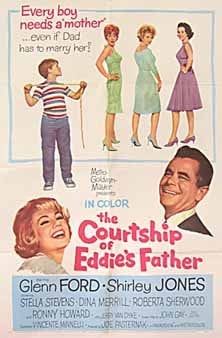 Eddie’s psychological state not only frames the presentation of the film but the context of Howard’s performance. Were the film released today, Howard would almost certainly be pegged as playing that horrid “precocious” card that children inevitably use when forced to act like adults. But even when Eddie starts to play matchmaker for his father and gives blunt, hilariously uninformed opinions on relationships and sex, he demonstrates not the bossy confidence of youth but an unconscious desire to push himself forward to a mature enough state to understand what has happened to him. In trying to get his dad back out on the market, Eddie hopes to figure out enough about women to appreciate the woman now missing from his own life. That sounds Freudian, but in practice it turns a comedy of manners into a splintered melodrama, one that exposes occasionally flat surfaces as transparent masks hiding roiling internal drama behind awkward, blunt phrasing and, on Tom’s part, stiff formality.

Just compare how the now-clichéd setup of a child directly, sometimes scathingly vetting a potential step-parent is almost a challenge, in this movie, to the divorce-based remarriage comedies made over the last few decades. Those films tend to portray the children with a combination of sympathy and outright malice, acknowledging the pressure of accepting someone new as a surrogate while also, more often than not, portraying them as tiny monsters, unyielding in their decision to punish a third party for their parents’ separation. Eddie, on the other hand, is enthusiastic about his dad getting remarried, even if he does offer warnings about “skinny ladies with big busts” and other life lessons he’s gleaned from comic books. Instead of being both shoulder angel and demon for Tom, Eddie acts as both Tom’s foil and his inner voice, confronting his father’s reticence over his obvious attraction to the divorcée across the hall (Shirley Jones) while speaking aloud the feelings Tom won’t allow himself to share.

Minnelli hides all of this in plain sight, fusing it to the film’s broader comedy, which itself predates the more socially aware comedies that arose at the margins of ‘70s American film. The women with whom Tom interacts all have traits that bring to the fore then-controversial ideas, from the ostensibly shy airhead (Stella Stevens) who spoofs notions of a trophy wife that become antiquated in real-time as Stevens exaggerates the part, to the career-oriented colleague (Dina Merrill) whose talk of being on equal terms with her partner elicits a dismissal from Tom—he says he can’t see that line of thinking becoming a “movement”—that makes fun of a soon-to-be-obsolete male mindset, as well. Even some of the throwaway jokes have a satiric edge to them, such as Eddie’s befuddlement at reading Jayne Mansfield’s measurements in a magazine, wondering if they are stats, like those printed for baseball players. In explaining what they mean to his son, Tom inadvertently exposes how bizarre, not to mention invasive, it is that such figures are publically entered, a minor reflexive break that expands the film’s interior exploration to a larger critique. As with Home from the Hill, The Courtship of Eddie’s Father passes for the sort of stodgy film that the coming decade of studio collapse, experimentation and renaissance would clear away, only to reveal upon closer inspection a movie that stands with the most introspective, critical works of the coming countercultural wave.