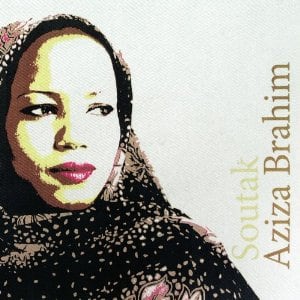 [xrr rating=4.25/5]Soutak is Aziza Brahim’s first album for the always-interesting Glitterbeat label and it’s a corker. Brahim is currently based in Spain but was born and raised in the Saharawi refugee camps along the border of Algeria and Western Sahara that arose in the wake of Morocco’s 1975 invasion and occupation (an occupation that continues to this day). Her music is informed by the refugee experience, her husky voice possessed of an elegiac sadness mixed with unshakeable strength. Soutak, which translates as “Your Voice,” indeed gives voice to the experience of the dispossessed, with songs like “Lagi” (“Refugee”), “Ya Watani” (“My Land”) and “Manos Enemigas” (“The Enemy’s Hands”).

It’s stirring stuff, in other words. But wait! This is not a case of something being worthy and important, but ultimately dull. Brahim’s voice is lovely and the arrangements here are spare and precise, but the tunes are strong because they work as songs, not just as propaganda pieces. The fact that there’s real substance to them makes them that much more powerful.

The standout cut here is “La Palabra” (“The Word”), but that’s just because I’m sucker for bluesy arrangements that stretch into five-minute trance sessions. Here Brahim, like Ali Farka Touré and many others before her, bridges the gap between loping West African rhythms and Mississippi Delta blues, with a thrumming bass line, facile guitar picking and the singer’s keening voice floating over everything.

This is by no means the only notable tune. The album kicks off with “Gdeim Izik,” a six-minute statement of purpose that, in many ways, sets the tone for what is to follow. Brahim utilizes a subdued sonic palette on this record, consisting of her voice, some nimble guitar, and a rock-solid bass-and-drums rhythm section, anchored by lively conga and the traditional hand-held tabla drum. “Gdeim Izik” fuses these elements into a lively and propulsive tune, one that uses the bass to motor things along but which leaves enough open spaces for the voice to occupy center stage.

This is her M.O. for the album as a whole. “Espejismos” ploughs much of the same furrow, musically speaking, albeit at a slower speed and a more mournful vocal tone. Looking at the accompanying lyric sheet, this is perfectly appropriate for the material. “Lagi” and “Soutak” both up the tempos, with the latter creating a fair degree of sonic density with its wash of acoustic guitar and echoing percussion. Meanwhile, “Aradana” stands out as something of a minimalist oddity, comprised solely of Brahim chant-singing over hand percussion. At three minutes, it’s the shortest track here and for some listeners it will be their least favorite, but it’s undeniably arresting.

Brahim has self-released a pair of earlier albums, the 2008 EP Mi Canto and Mabruk (2012), neither of which I have heard. This record, though, is outstanding and it shows an artist at the top of her game. Born out of pain and hardship, it doesn’t shy away from tough lyrical themes, but Brahim has shown that beauty can come out of adversity and real art can be the product of oppression. The important word in that last sentence is “art.” This album makes a strong political statement, but don’t listen to it because of that. Listen to it because the songs are beautiful.