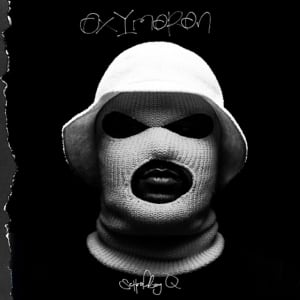 [xrr rating=3.25/5]Rap imprint Top Dawg Entertainment (not to be confused with Kid Rock’s Top Dog Records) has a certain feather in its cap that puts its reputation above any and all other hip-hop collectives this decade, and that feature is Kendrick Lamar’s Good Kid, M.A.A.D. City. The rare instant classic that unifies the entirety of the hip-hop nation, it encapsulated everything a rap album should be, gaining enough momentum to even garner an impressive string of Grammy nominations. As outstanding as that record was, it does set a high standard for the rest of T.D.E. to live up to. Schoolboy Q is the next up to bat from the crew, making his album Oxymoron not only highly anticipated, but forced to compete with a lofty set of expectations. This is something Schoolboy Q himself could perhaps be attributed with creating by promising the record would be better than Kendrick’s predecessor, otherwise “why else put it out?” Schoolboy’s album happens to be too different to really compare to M.A.A.D. City, which has made it one of the year’s most polarizing releases.

Schoolboy’s 2012 single “Hands on the Wheel” topped several “Best of the Year” lists, so it’s not as if he’s merely riding Kendrick’s momentum. He’s a more than capable artist in his own right, to the point where the past year has seen him stylistically take a very divergent path. Citing that there’s no more real “gangsta rappers,” Schoolboy decided to gangsta lean pretty hard on the album. Instead of the masterful concept album-length parable that M.A.A.D. City was, this is Schoolboy channeling his gangsta heroes into a mushroom cloud of a record. The blatant cues of wearing his influences on his sleeve seems more akin to an A$AP Mob release than T.D.E., but the haunting depth of the production behind Schoolboy’s leadership keeps this unmistakably a Top Dawg product.

But separating himself from his teammates sometimes affects his delivery, making his flow come off on tracks like “Los Awesome,” “Prescription/Oxymoron” and “Blind Threats” seem like he’s trying too hard, in the latter’s case killing the otherwise stellar ambiance set by a great hook and haunting beat which is thankfully salvaged by a great Raekwon cameo. But these are only slight hiccups as Schoolboy is legitimately different enough and focused enough to make Oxymoron sound inspired. Speaking of the cameos, the guest producers and MC are well selected here as well, and hearing the always underrated Kurupt get mercilessly callous over a Tyler, the Creator production on “The Purge” is one of the year’s earliest great surprises.

Did I mention this album is dark? Not to keep running back to the well of the M.A.A.D. City comparison, but on Oxymoron, absolutely no light exists. Even the party cuts like “Man of the Year” and “Hell of a Night” are downright menacing. As diverse as Schoolboy’s flows are on the project, they all seem to be rooted in a growl that would sound right at home in an early ‘90s “Is gangsta rap killing our kids?” primetime news story. There are no moments of alleviated pressure like 2012’s “There He Go.” In fact, had “Hands on the Wheel” been on here, it would have been the feel-good song. So, yes, it’s a dark, dark record and that’s probably why it’s come off as such an abrasive, polarizing release. Still, Q does dark well, and Oxymoron does help diversify T.D.E.’s excellent arsenal. If you know what you’re getting into, it’s recommended.