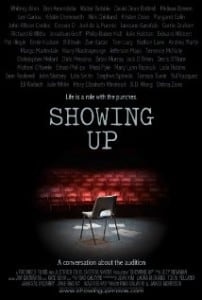 [xrr rating=4.0/5]It’s said that the first thing John Huston did at Marilyn Monroe’s audition for The Asphalt Jungle (1950) was to reach into her dress and remove the falsies from her bra. Sean Young, desperate after bad luck cost her the role of Vicki Vale in Batman (1989) and in the midst of a career downswing, filmed her own audition for Catwoman in Batman Returns (1992) and became an instant punchline. Amber Tamblyn once related that, at an audition when she was nine years old, she was not only rejected for the role, but scolded for her life choices. “You’ve obviously never done this before, have you?” the little girl was told. “Maybe you should go figure out what you want to do with your life.”

It’s legendary tales like these that prove a failed audition can be a truly damaging experience, yet many of the actors interviewed in Showing Up: A Conversation About the Audition would disagree. Over 40 actors, along with a few playwrights and directors, recount stories collected during a lifetime of auditions, sharing the moments that really mattered, the things that went wrong, their fears and the often surprising details of the process.

There are no truly outrageous stories in this documentary, though, no homemade catsuits or unwanted groping, but there is an obvious theme of disrespect. From being asked to walk around the block a few times because the waiting room was too crowded, to auditions with unresponsive office assistants who drone “blah blah blah” instead of reading lines, the sheer contempt many in the industry feel toward actors is astonishing.

As we are reminded in Showing Up, the only artists who are required to pass an interview before being allowed to practice their art are actors. Interview after interview, performers recount having to be completely on, poised and ready as they sit with nothing to do but be nervous for three hours, an afternoon, even an entire day, just to have their 30 seconds with a casting crew who may have already made up their minds hours earlier.

Surprisingly, there is very little bitterness here. Every person in Showing Up without exception is charming, eloquent and even hopeful. The scope of interviewees is impressive, giving us insights from both major stars and burgeoning young actors, Broadway veterans and those who made their name on soaps. Nathan Lane and Margo Martindale are interviewed, as are Philip Baker Hall, Chris Meloni and Ernie Hudson, just to name a very few. Chris Messina is charming, equal parts hilarious and vulnerable, always wearing his heart on his sleeve. Joel de la Fuente’s honesty is astonishing, and Currie Graham’s humor masks some reluctant truths about the biz. Sam Rockwell is here, too, apparently caught in the midst of lunch, and though he may not be as focused or coherent as the rest — something we’ll politely chalk up to carb overload — his obvious enthusiasm for the subject is a welcome contrast to the more polished recollections of others.

It’s not surprising that the demeanor of the interviewees directly mirrors what they bring to the discussion. The overconfident tell you more about themselves than about the process, the professional have terrific insight and advice, and the wary often reveal secrets. Comprised of interviews filmed over the last few years, including footage of the late Pat Hingle and Richard Griffiths, Showing Up is literally nothing but interviews, actors shot in medium close up, recounting their experiences, yet Showing Up still manages to be fascinating. It’s a terrific look into an artistic process that is often overlooked, and though there are some clichés at work here, the candor with which the topics are approached is refreshing and enlightening.