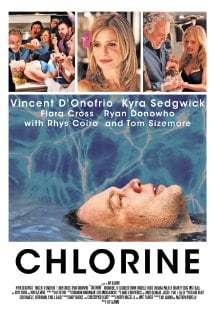 [xrr rating=1.0/5]There’s a glimpse of a news article in Chlorine, mostly gibberish, left up on the screen long enough for the audience to make out phrases like “Ireland Ireland” and “Belfast.” There’s Elise, a beautiful red-haired golf pro with striking green eyes and clothes to match, an unappealing character without purpose, except perhaps to explain a few weak plot points. Then there’s Pat, who shows up intermittently, dressed in that particular shade of green familiar to St. Patrick’s Day revelers everywhere.

But what does it all mean? There is no payoff, no overt mention of any of these things. Are they merely quirks intended to add texture to the story? Remnants of a plot line that never quite gelled? Simple coincidence? It’s impossible to know, and by the end of Chlorine, it seems unlikely that the filmmakers can explain it, either. The screenplay is full of these incongruent moments, often in the form of single lines of dialogue in desperate search of a context that they will never find. At times, the dialogue is so choppy it’s as though words, even entire phrases, have been randomly removed in a literary version of a Hail Mary pass, someone hoping against hope that implausible dialogue will create interesting characters.

The family at the center of this suburban comedy-drama are the Lents, headed by patriarch Roger (Vincent D’Onofrio), a milquetoast banker whose wife Georgie (Kyra Sedgwick) is a mess, a woman so dissatisfied with her mid-century, split-level lifestyle she buys a motorcycle and sneaks beers in the garage. Desperate to be part of the upper class but passed over for promotion yet again, Roger gets an opportunity to invest in a development in their small town of Copper Canyon. Without his own funds, he instead steals the sizable cash deposit made by his friend and country club tennis pro-slash-drug-dealer Pat (Rhys Coiro), unaware that the development is a glorified Ponzi scheme.

The financials in this construction deal are as vague as the science in a 1950s sci-fi flick, though far less entertaining, especially when golf pro Elise (Michele Hicks) enters the picture. A vague sketch of a character, she fills whatever role the scene needs her to, from being the adult confidante of Roger’s and Georgie’s neglected daughter, to the only person who knows coke-fueled investment banker Doug (Jordan Belfi) is crooked. Whether Elise knows she’s the third wheel or not, she is; the major conflict in the film is between the two couples, Doug and his paid-for desperate housewife clone representing the ideal Roger and Georgie strive for, and Elise, though intended as Puckish, has far less impact on them than the screenplay seems to realize.

Of similar minimal impact is the alleged humor, provided mainly by Coiro, who indulges in a bad Alan Arkin impersonation throughout. The country club groundskeepers are straight out of Caddyshack, and a bit involving a so-called “Indian ceremonial ground” will not induce chuckles, but it is guaranteed to make you roll your eyes. Rather than contrasting with the humor, the intended roiling, suburban angst is undermined by a strange dull pleasantness that afflicts every character in the film. Topping all this off is the forced whimsy of the visual aesthetic. Though the set design is solid, the entire film has been processed with a ridiculous filter that adds bright hot pink to the reds while washing everything else out, giving the project an unprofessional feel.

Time and care was spent arranging the characters in Chlorine for the payoff, yet the film entirely disintegrates in the third act, plot points ending abruptly without context or reason. By the finale, tonal inconsistency is replaced with abject sloppiness. Sexist tropes about the inherent greed of women are deployed, and characters display omniscience, knowing things they could not possibly know, just to resolve plot points. Everything devolves into a whirlwind of continuity errors and contradictions so fatal that it can’t even pull itself together for the final scene. With very little charm and almost no wit, Chlorine is nothing but a dull disaster of a film.