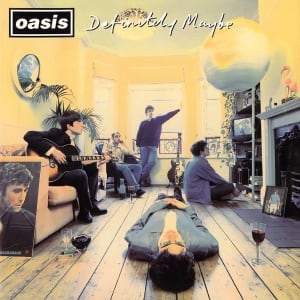 In 1994, one band ruled the world. Fronted by an abrasive, charismatic singer and openly acknowledging their songwriting influences, that band became the figureheads of a nascent, widespread musical movement. They gave focus and a face to a genre that was ultimately composed of disparate, highly competitive groups, but they were also accused of commercializing alternative music and opening the gates to a slew of subpar imitators. That band was called Nirvana. But oddly enough, the same description could be used for Oasis, a band that captured the rock zeitgeist immediately after the grunge godfathers dissolved. The Manchester band released their first official single, “Supersonic,” on April 11, 1994, only three days after Kurt Cobain’s suicide, and their full length debut Definitely Maybe came out that August, but in all practicality, their early career arc mirrored that of the most influential American rock group of the last few decades.

But 20 years on, what is really apparent about the album is how reactionary it is. In the time period which it was released, there was no ignoring grunge and by extension, Nirvana. But whereas the United States embraced it with a fervor that dismayed Cobain, Great Britain increasingly shied away from the alternative/college rock scene that had produced grunge, turning to their own roots in 1960s pop and 1970s punk. Suede, largely considered to be the first band hailed under the Britpop banner, famously adorned the cover of Select magazine under the headline “Yanks go home” but as always, the truth behind the slogan is more complicated than that. For better or worse, Oasis, rather than Suede or Pulp or any of their more self-consciously “arty” peers, became the popular face of Britpop and Definitely Maybe simply could not have existed without grunge.

This isn’t to say it is a grunge album or even particularly musically influenced by the quiet-quiet-LOUD-quiet aesthetic. As a collection of songs, it has far more to do with T.Rex and Slade than anything else; at this point in their career, Noel Gallagher focused the band on the most direct approach possible, creating a massive roar of melody. At times, the tracks approach an AC/DC level of rock n’ roll crudity, with the combined guitars of Gallagher and Paul “Bonehead” Arthurs barely bothering with riffs but simply forcing along the melody in a relentless chug. Liam Gallagher’s voice has never been more nasal and raw on record than their debut, even though he reached for more falsettos than any other release. Compared to the orchestral production of Be Here Now and the psychedelic flourishes of Standing on the Shoulder of Giants just a few years later, Definitely Maybe makes a virtue of simplicity.

What really makes it such a reactionary album is the sheer directness of Gallagher’s songwriting. Where grunge trucked in obtuse lyrics and miserabilism, Oasis proudly stood behind songs that bordered on slogans with a perverse sense of optimism. Noel Gallagher has spoken of one of his finest songs, “Live Forever,” as a direct response to Cobain’s “I Hate Myself and Want to Die,” and while they’re musical oceans apart, it’s not difficult to see the connection. For an album centered on two Northern lads with bad attitudes, there’s a distinct joy in the album’s 11 tracks. It ranges from satisfaction in life’s toxic comforts on “Cigarettes & Alcohol” to the childish sentiment of “Digsy’s Dinner,” but at the end of day, Definitely Maybe is an album of good feelings.

Paradoxically, throughout Definitely Maybe, there’s a thread of self-doubt that exists nowhere else in the band’s discography. “Cigarettes & Alcohol” counters its cheerful riff lifted from Marc Bolan with the dismissive query “Is it worth the aggravation/ To find yourself a job when there’s nothing worth working for?” “Live Forever,” one of the band’s most uplifting songs painfully admits “Maybe I will never be/ All the things I want to be,” which Gallagher would probably never admit outside a lyric. And perhaps most tellingly, the opening track, “Rock ‘n’ Roll Star,” may have the singer caterwauling about being a star, but it’s important that it’s asterisked with “Tonight…” This is the sound of the Gallaghers willing themselves into the rock icons they always wanted to be, but knowing there was always the chance that they wouldn’t get to be.

Moreover, while it’s really only possible to listen to the band now and hear two decades of the Gallagher brothers’ relentless ego and bluster, Definitely Maybe was written during a period of their lives when they were penniless yobs hoping for something big to happen. Ever since this album, the brothers have perceived themselves as kings of the world, the last avatars of true rock n’ roll; you can debate that if you like, but during this period, the elder Gallagher was working in an industrial storehouse and dreaming of being a star. Definitely Maybe is a reactionary album, to be sure, but it’s also the most honest album that Oasis may have ever made.