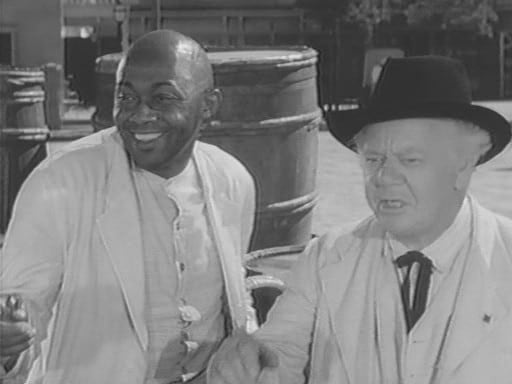 The Searchers appeared for the blink of an eye at this year’s Academy Awards, one of a scant handful of films made before 1990 featured in one of those inane, pandering montages. That Ethan Edwards was included in a tribute of great cinematic heroes, however, speaks to how enduringly half-understood and willfully forgotten John Ford’s great, challenging work remains, and how even his most well-known films are often considered only in the abstract by those purporting to be fans. To tag the corrosive, implicating rage of The Searchers as “Ford’s racism movie” is not only to miss the deeper points of that film but to miss that Ford turned to the subject of race and racial strife surprisingly often in his career. One of the films that actually digs into the social realities of racism, instead of its emotional impact, is The Sun Shines Bright, one of the handful of Ford’s movies that the director would interchangeably refer to as his favorite when pressed.

A half-remake/half-continuation of his 1934 film Judge Priest, 1953’s Sun aggregates several Irvin S. Cobb stories about a Confederate veteran judge in post-Reconstruction Kentucky. The film is one of Ford’s outright comedies, the genre for which the director expressed his greatest fondness and the area of his work that comes in for a critical drubbing most frequently. The Sun Shines Bright, with its wistful look at a society openly smarting from their loss to the Union—and in many ways carrying on race relations as if nothing had changed—is not a film that, at first glance, could win the hearts and minds of a modern audience. And that’s before you take into account that it prominently features Stepin Fetchit, years after even the racist Hollywood of the time had erased him from the screen out of embarrassment.

Look closely, though, and Ford’s comedy betrays a more mature, more modern appraisal of a neglected period of American history (and its enduring social implications as it pertains to race) than practically anything made since. Priest himself offers a portrait of the town in redux during the first major scene. Presiding over the court case of one Ulysses S. Grant Woodford (Elzie Emanuel), a young, black banjo player blissfully unaware of how incendiary his namesake is in this part of the world, Priest is old-fashioned in ways both regrettable (referring to Woodford’s aged uncle, Pleasant (Ernest Whitman), as “boy”) and admirable (greeting Pleasant as a friend and comrade upon recognizing him as the same man who helped a wounded local during the war). The judge’s relationship to race and history, obliviously demeaning yet respectful, is then blown up into farce when a curious Priest asks Woodford to play a military song on his banjo, at which point the poor, clueless kid launches into a rendition of Yankee anthem “Marching Through Georgia” that turns the white Southerners in attendance pale with shock and outrage and Jeff (Fetchit), Priest’s loyal manservant, even paler in secondhand concern. Lurching forward with the excuse that one of the strings is out of tune, Jeff in no uncertain terms goads Woodford into switching to a more pleasing song, at which point the boy takes the hint and transitions into “Dixie,” at which point the infuriated whites break into dancing and hollering as even passers-by sprint into the courthouse to cut a rug. So pleased is Priest that he effectively guarantees Woodford a job, and instructs the young man to find work away from any kind of industrial equipment that might inadvertently mar those golden hands of his. 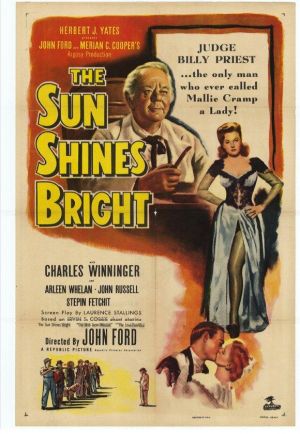 The moment, one of Ford’s most successful comic setpieces, is funny, but it also provides a snapshot of the hair-trigger tempers roiling under a seemingly placid small town, ready to go off should anything intrude upon that quintessentially Southern form of repressed cultural memory. The Sun Shines Bright can peel back a frightful hostility at times, never more so than in the sequence in which Woodford is falsely accused of raping a white woman and, without a moment’s hesitation, a furious white mob assembles and marches toward the jail cell where the boy is being held. Ford intended to put this scene into his first Cobb adaptation but could not get such a thing cleared in 1934; in 1953, the year before Brown v. the Board of Education, it only seems more radical an inclusion in an ostensibly frothy, provincial comedy.

Despite flare-ups of moral superiority and outright hatred, however, the film views this community with a recognition of their strengths that never panders. It never paints Priest as perfect, but he does represent the unenlightened but wise and moral being to which many should aspire. When Priest intercedes to stop the lynch mob, he does not deliver an overcooked speech filled with liberal sanctimony; instead, he destroys the mob in the most efficient way, by reminding the collective of who they are as individuals. Priest addresses specific members of the group, and in reminiscing with them he gently but sternly reminds them of how much better they are than this. The judge also embodies a politically conciliatory gesture, copping to his crew stealing the Grand Army of the Republic chapter’s flag but earnestly offering to personally return it as an acting color guard for the Union vets.

Ford’s style, of stately master shots that never cut any closer than a medium-shot and rarely even get that close, is on display here, a classical form of filmmaking that befits its old-timer hero. But just as Ford’s visual signature bears the marks of apprenticeship in the silent-era while still demonstrating a constant sense of aesthetic growth and refinement, so too does its application here ultimately comment on its stodgy characters. A long shot of the aforementioned Confederate veterans meeting emphasizes the number of empty chairs in the room, of how few remain and how decrepit those still here are becoming. Other shots, of a portrait betraying the general father and prostitute mother of Lucy Lee (Arleen Whelan), the young girl who has never known her parents, add a subplot of unforced suspense as its presence causes stress for the embarrassed officer and finally catches the eye of the young woman.

The most bravura filmmaking comes in the form of two processions late in the film. One is for the funeral of Lucy Lee’s mother, recognized as such only on her deathbed and given an honorable burial by Priest, who understands his own role in shunning this woman and denying her her child. As the procession starts, a group of Pharisaical, moralizing ladies huff and even taunt the hearse and the carriage of mourning prostitutes, but slowly the townspeople join the line, and the frame falls into a haunting silence as the camera cuts away to faraway, high angles, as if God had returned to the town to acknowledge its residents finally acting as Christians. The scene’s most striking image, of Lucy Lee climbing aboard the carriage of prostitutes to ride shotgun with a black driver, offers a radical portrait of unity that is never commented upon. The second procession, celebrating Priest’s re-election, is more openly revelrous but reverts back to old divisions, as Confederate veterans, Union veterans and temperate women ride past him in their separate cliques, while the members of the black community come on their own as well. Maydew refers to Priest and co. as “the doddering relics of a lost cause,” but as the newly re-elected judge watches everyone pass by, united in an ironic separate-but-equal conglomeration of uneasily cohabiting groups, it would seem that the Southern war effort is not the only doomed cause at work on this Kentucky hamlet, and that Priest’s own reunification potential is fated to die with him.