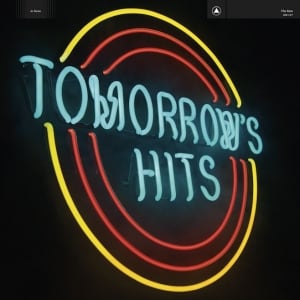 [xrr rating=3.75/5]Do you believe in coincidence? Many people don’t. We’re hardwired to find patterns and connections and it’s almost impossible for us to accept that those relationships might exist only in our minds. With their latest release, Tomorrow’s Hits, the Men try to overcome our natural instincts. They’d have us ignore the evidence of our ears and entertain the conjecture that, somehow, their immersion into 1970s rock is anything but a retro pose or heartfelt pastiche. They seem to suggest that they’ve never paid any attention to bands like Cheap Trick, Bruce Springsteen or Tom Petty. So any resemblance is just an aural trick.

The thing is that they just about pull it off. Listening to “Settle Me Down,” I can hear a blend of George Harrison and Tom Petty among others, but the longer the song plays, it stands more firmly on its own merits. There’s a lot going on from the opening notes: the bass and guitar aligned in staccato arpeggios, the choppy rhythm guitar, a shimmery touch of slide guitar and an amorphous wash of organ to cement it together. The swaying rhythm of the A section gives a lazy feel to the vocals. The B section balances a surf-guitar tinged darker edge—“But it’s all right that I didn’t see you that night”—with mellow “oohs” and brighter jangle. There’s not a lot of lyrical depth here; the band just repeats a simple set of lines. But the piece has a meditative quality that transcends its musical references. Like their earlier work on Open Your Heart (2012), the clench-release flow of the song is innately satisfying.

Given the band’s punk roots, it’s interesting that the strongest—and hardest to ignore—apparent influence is Bruce Springsteen. The opening chords of “Dark Waltz” suggest “Adam Raised a Cain” crossed with a bit of John Fogerty. “Another Night” feints towards “Because the Night” before changing directions with a Clarence Clemons-style sax riff and a Van Morrison vocal feel. The album closer, “Going Down,” comes from deep within the lo-fi reverberation of the garage, driven by an up-tempo punk energy, but it still finds kinship to Springsteen’s Greetings from Asbury Park, N.J. (1973).

Tomorrow’s Hits, though, is at its best when the Men indulge their predilection for thrash and attitude. My favorite track, “Different Days,” launches with an adrenaline pulse bass line before dropping into a driving garage rock grind that supports the punk vocals. It reminds me of Team Spirit’s raw garage pop and, like Team Spirit, the Men can pack a lot of angst and ecstasy into the same space (“And I’m waiting for this night to fade/ And I hate being young/ Sick of all this do-or-die/ Don’t they know it’s just suicide? Uh huh”). In the album’s lead single, “Pearly Gates,” the band applies their over-the-top treatment to blues rock. The exuberant chaos and untethered slide guitar suggest Johnny Winter’s cover of “Highway 61 Revisited.”

There’s an obvious irony in calling this collection of retro-toned tunes Tomorrow’s Hits. Sure, musical fashion rolls through its cycle and everything old is new again sooner or later. But I think the point is that bands like the Men have been absorbing all of these classic sounds for so long that this mishmash of lo-fi, raw rock building blocks is their milieu. In that context, the title puts most of its emphasis on sarcastically mocking the idea of “hits.”