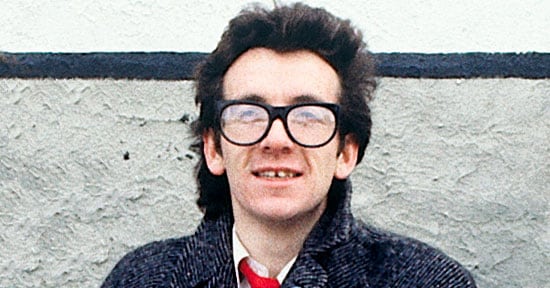 Spite and meanness – those are what make the world go ‘round – and few artists’ lyrics are as poachable for prime examples as Elvis Costello’s. This List Inconsequential contains 10 of my favorite Costello insults and offers ways to incorporate them into daily life. Because, let’s face it, there are few things in life more satisfying than a well-timed cheap shot. Sticking it to someone who’s wronged you, or who you’ve wronged but you still can’t own up to it…that’s as good as it gets. Enjoy.

“The Other Side of Summer”

“Was it a millionaire who said “imagine no possessions?”

You want to see gray-haired dudes’ passions inflamed and frothing at the mouth? Toss off this John Lennon dig whenever the yearly re-canonization of the Beatle occurs. Admit it… “Imagine” does suck.

“And if you still don’t like my song/ Then you can just go to hell.”

You’re pushing 65 and your Lester Bangs-esque garage band fantasy ain’t coming true. Still, now is not the time to admit defeat. Double down with this snippy quote of defiance. Then go learn what a B chord is.

“Starting to Come to Me”

“You’d probably play the pirate if you weren’t so busy digging up the gold.”

Kanye might have cornered the market on gold digger-inspired insults, but Costello’s cred hasn’t been destroyed by a Kardashian coupling. It was destroyed by other things like expensive VIP concert ticket packages, true, but this financially-conscious insult will still work in a pinch.

“I’d rather be an outlaw than an in-law to you.”

A close cousin of the previous quote and ideal for marriages on the skids, especially ones in which your in-laws don’t appreciate too-cute wordplay and the occasional bad pun.

“Suddenly you’re talking like a duchess/ But you’re still a waitress.”

You had to bribe the maître d’ just to get a table at this hoity-toity restaurant famous for treating its customers like diseased whores. The last thing you need to deal with now is a haughty waitress with an air of superiority.

“The wine you drink has never seen a grape.”

Self-professed wine aficionados are arseholes. Let them know it.

“Don’t act like you’re above me/ Just look at your shoes.”

Easily as petty as the previous quote and every bit as satisfying when used properly. You might be poor, but that toll booth operator laughing at you as you board the wrong train like someone fresh off the boat is probably poorer.

“Tramp the Dirt Down”

“Because there’s one thing I know/ I’d like to live long enough to savor/ That’s when they finally put you in the ground/ I’ll stand on your grave and tramp the dirt down.”

Don’t worry, the government isn’t monitoring what you’re saying right now. Go ahead and tweet this quote when your most loathed political figure heads off to that big Congress in the sky. It’s safe. No one’s listening here.

“He stood five feet tall in his elevator shoes and stovepipe hat.”

One for the ladies. That guy you met online looked nothing like his Facebook picture now, did he? The bald head was one thing, but the way you could see clear over the top of it…

“And it’s the force of habit/ If it moves then you fuck it/ If it doesn’t move you stab it.”

You could just call someone a slobbering Neanderthal and move on, but that’s too easy. My pick for Costello’s best lyric and the one most likely to result in a return sucker punch or well-deserved slap. Everyone should have the opportunity to use this one once in a lifetime, though. Its uses are limitless and its consequences will likely be vast. My advice: duck and run after you’ve lobbed this one in someone’s direction.