In 1962, Warner Brothers outbid all other studios for the rights to a movie that would cost a then-staggering 17 million dollars to make. And they wanted Vincente Minnelli to direct.

Minnelli had just wrapped The Courtship of Eddie’s Father when Warner asked if he’d take on the film version of the Broadway smash My Fair Lady. The production would have reunited the director with the team that had made his Gigi such a success: songwriters Lerner and Lowe and production designer and costumer Cecil Beaton. But Warner would only offer a flat salary. When Minnelli asked for the box office percentage that he’d negotiated for himself at MGM, Warner balked, and went instead with George Cukor, whose My Fair Lady went on to win eight Oscars. “My heart didn’t break,” Minnelli wrote in his memoir, I Remember it Well. But the road not taken had to be a deep regret, especially given the project Minnelli worked on next.

Minnelli’s consolation prize was a Broadway property that could not have been more different from the one that got away. In 1964, New York Times critic Bosley Crowther handed down what would be a common sentiment: “George Axelrod’s Goodbye Charlie was bad enough on the stage. On the screen, it’s a bleak conglomeration of outrageous whimsies and stupidities.”

Goodbye Charlie, adapted from Axelrod’s 1959 Broadway comedy, is frequently counted among Minnelli’s worst films. The movie opens with a debauched yacht party in what amounts to a funhouse distortion of a classic Minnelli production number. Here, the vibrant colors of Minnelli’s mature style are in full effect. That’s where the resemblance ends. Graceful camerawork is replaced with a jagged, unstable point of view. Elegant dancers are replaced with frenetic shaking. Lerner and Lowe are replaced by a forgettable Top 40 pastiche. The elements of pop art depict a nightmare scenario, evoking a sinister atmosphere that suggests this bacchanal can only lead to a bad end. That it does. A jealous movie producer, Leopold (Walter Matthau), catches his wife in the arms of a lecherous screenwriter, the titular Charlie (Harry Madden). Charlie jumps out of a porthole, but not before Leopold shoots and kills him. 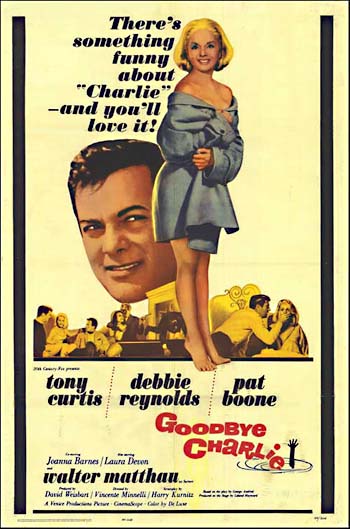 Charlie’s mortal plunge into the sea inspires the movie’s best asset: a charming animated credit sequence that features beautiful sea creatures. Out of this primordial pool emerges a new creature. Devoted bachelor Charlie draws the ultimate sentence as punishment for his sins: he comes back as a woman. A woman everybody wants. This karmic gender play suggests a much superior art-house hit that I won’t spoil by naming, but where that 21st century film took gender as a provocative canvas for a masterful thriller, this mid-century bauble is all innuendo and titillation, and not particularly titillating at that.

Lauren Bacall played the reincarnated Charlie on stage. Marilyn Monroe was to star in the film version, but she died before production began. So who does the studio pick as its sexpot from the sea? Debbie Reynolds, hot off the success of The Unsinkable Molly Brown.

Minnelli states the obvious in his memoir I Remember it Well: “Debbie Reynolds was not Monroe.”

Reynolds is cute, but one of the problems with the movie is that you spend a lot of time recasting it. Jayne Mansfield? Kim Novak? Reynolds is just too darn spunky to pull off the complicated role of a woman who used to be a man and has to make you believe lines like, “I don’t have to go see Brigitte Bardot movies anymore. I can just stay home and pull down the shades.”

The rest of the cast doesn’t fare much better. Tony Curtis plays Charlie’s best friend George, whose initial disbelief that his dead pal has come back as a woman turns into conflicted attraction. It’s the kind of sexual duality you expect from Minnelli. But he doesn’t get the kind of comic timing that might make this farce workable. You can see where a director like Billy Wilder or (especially) Frank Tashlin might have made better hay out of this. Tashlin would have brought a visual wit more suited to the project than the vestiges of Minnelli’s lush elegance, traceable in sets that look good but perhaps too good, like a bachelor pad that seems too tastefully put together to have belonged to an unrepentant cad.

It gets worse. Pat Boone plays Bruce Minton III, a young heir smitten with Debbie Reynolds. If a time traveler told the people of 1964 that this actor would someday peddle an easy-to-get-out-of bathtub to the elderly, they may have died laughing. Boone is simply callow and mundane. Walter Matthau puts on bad Hungarian and British accents in his embarrassing portrayal of the producer. You’d never know that Matthau was a great comic actor, but even if the script is partly to blame, it’s the director that allowed his actors to flounder.

Goodbye Charlie left behind an inauspicious legacy. The play formed the basis of Blake Edwards’ more successful 1991 film Switch,and it was also adapted for a 1985 sitcom starring Suzanne Somers. Only the pilot episode was ever broadcast. I can’t imagine it was any good, but casting Somers as Charlie already gives it a leg up over Minnelli’s late-career folly.