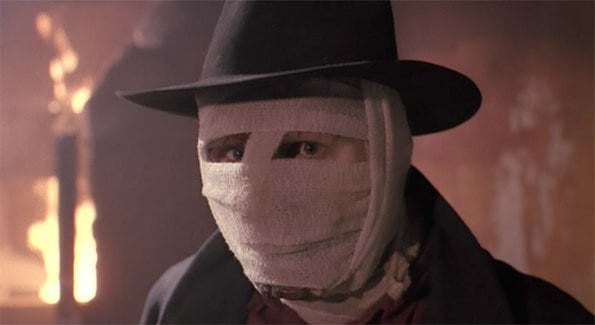 Long before Liam Neeson action vehicles became a seemingly mandatory item in each year’s first-quarter releases, there was Darkman. Sam Raimi, coming off what still stands as his greatest film, Evil Dead II, secured enough clout to make a superhero movie for Universal. Based on a character of Raimi’s own creation, Darkman is the kind of movie that could only have been made in the ‘90s, when interest in comic-book movies had slowly awakened from the runaway success of the first Batman but stultifying nerd purity had yet to homogenize the genre and demand that any movie about a superhero amount to little more than a filmed flipbook animating comic panels. The notion that Comic-Con audiences today would play their hype role for a director’s own invented hero (as opposed to, say, the same director’s eventual attachment to an established icon) is an unlikely one at best, and that should only be considered one more positive aspect of this bizarre, tongue-in-cheek delight.

The premise of Darkman hurdles over absurdities and tangential connections with such confidence and speed that it makes a preemptive mockery of the hour-long establishing acts of franchise starters today. Peyton Westlake (Neeson), a researcher in synthetic skin, makes a breakthrough discovery about his fake skin’s sensitivity to light, but before he can amend the issue, he finds himself the victim of a mob hit connected to his attorney girlfriend, Julie Hastings (Frances McDormand). Exactly how and why her work leads back to him would require a lengthy recounting of plot details that the film thoroughly belabors and then hilariously reveals to be redundant and unnecessary. Suffice it to say, any movie in which characters marvel at a model city-of-the-future erected on a boardroom desk makes it instantly plain who the real villains are and how ruthlessly they will use crime to create a gentrified society without it. Right around the time the sheer weight of all the talk about real estate, backroom deals, and genetic engineering becomes burdensome, Raimi literally lights a fuse under it, sending Peyton sky high in a lab explosion then tumbling like a charred rag doll into the bay, where everyone assumes him dead.

The remainder of the film focuses on all the expected goals—Peyton’s quest for revenge, his attempt to perfect his skin formula not for social gain but to give him his own face back, reuniting with Julie—but it introduces quirks into Peyton’s character arc that turn the movie into something singular. With his face nearly burned off, Peyton becomes a masked character less for safety concerns than for basic necessity; Darkman is not a creature of shadow and deception because he wants to strike fear in his enemies but rather to soothe his own shattered confidence and sense of self. If some heroes put on a costume to hide their normal selves while others (like Superman or Wonder Woman) create a normal identity to hide their otherworldly being, Darkman’s disguise and normal appearance are rendered one and the same, as his ultimate mask among the many he uses to slip around undetected in the film is his old, unblemished face. That this mask and all the others only last 99 minutes thanks to that flaw in the synthetic skin adds an element of suspense to Peyton’s dealings with the gangster elements who maimed him, as well as an unexpectedly powerful sense of tragedy when he and Julie reconcile but he has to run away after an hour and a half at all of their meetings. 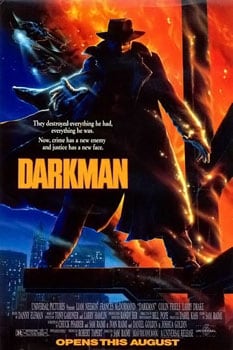 Another crucial twist is the medical procedure performed on the discovered, anonymous hunk of smoldering flesh that was once a respected medical researcher. Taken for a derelict who destroyed himself in an accident, Peyton is subjected to a clinical procedure that severs his nervous system. This renders him impervious to feeling so that he can stand for enough of his body to be burned, even as the loss of touch is casually mentioned by a surgeon, to prompt insanity from the resultant sense of isolation within himself. This adds a wrinkle to Darkman’s take on the superhero genre that makes it fresh, even ahead of the curve, today: the film’s designated hero is explicitly labeled a psychopath and is shown throughout the movie losing more and more of his grip on reality and sanity. Compare that to Christopher Nolan’s Batman films, which occasionally bring that hero’s darker social implications (vigilante justice, reactionary politics) to the fore but rarely, if ever, approach Bruce Wayne’s fundamentally sociopathic, broken soul. The glimpses we get of Peyton’s hideously scarred face symbolize his inner rot, the flesh and muscle completely gone from his jaw, leaving a puppet-like rendering of stiff teeth embedded in visible bone to clack together in a way that would be funny were it not so unsettling.

But then, Raimi, who with Evil Dead II returned to his tongue-in-cheek but mostly straightforward debut to craft a wildly parodic sequel in a famously self-serious genre, never allows Darkman to become a dreary, Greek tragedy wannabe. Peyton’s growing madness permits all manner of visual effects that add a comic-book style of bold color and blunt internal drama, albeit warped by a sensibility more akin to Looney Tunes. The camera wobbles and cants around Neeson’s face during moments of rage with such cartoonish exaggeration that it comes as a surprise when the scene doesn’t culminate in a close-up on his eyes as his pupils turn into mushroom clouds. Peyton’s clandestine disruption of mob activity by posing as various gangsters takes place against broad-stroke backgrounds like a smoky backroom in Chinatown, or a finale on top of construction girders that both anticipates the climax of Raimi’s later Spider-Man 3 and proves more economically shot, emotionally invested and tense than his blockbuster setpiece. Working with a more modest budget than Tim Burton had for Batman, Raimi nonetheless continues the legacy of that film, using a superhero film as the basis for both mimicry of comic-book form and transcendence of it in favor of its maker’s cinematic sensibilities and idiosyncratic flourishes.

But what of Neeson? It is here that the seeds of his modern-day action star are sown: at every turn the actor lets on an awareness of the goofball nature of the project, but he also takes his character seriously. He can be bring-down-the-house funny, as he is when he explodes at a carnival stand worker on one of his involuntarily brief dates with Julie, sending the smug twentysomething through the plywood wall and shoving a stuffed animal in his terrified love’s arms with a snarled “Just take the fucking elephant!” Then he can turn around and imbue Peyton’s wails of self-loathing with such deep hurt and revulsion as to be heartbreaking. Neeson had scored parts in numerous high-profile films by this time, but it is Darkman, of all things, that provides the first dead-on, undeniable glimpse at his ability to be charming, pitiable and terrifying all at once, and if movies like Taken and Non-Stop seem departures for the man who played Oskar Schindler, returning to Darkman makes it clear that he was taking roles like those long before he became a heavyweight.