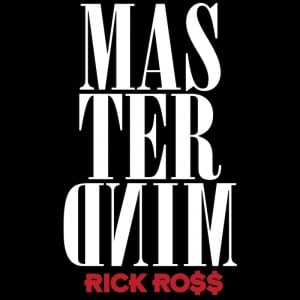 [xrr rating=2.0/5]Rick Ross, the self-professed “biggest boss that you seen thus far” is now six albums deep into an eight year solo career. He’s survived every major rap snafu from his revealed history of working with police to absurdly self-incriminating lyrics. He’s become a larger-than-life character that pokes fun at himself in family programming one minute and then raps about having people killed the next. How has he not just remained, but flat-out thrived under such conditions? It’s all because he’s changed with the times and come through with some of the most consistent but still logically-progressing hip-hop discographies of the past ten years. Sadly, Ross’ perfect record is abruptly blemished with Mastermind.

Speaking as a fan of Ross’ music, it’s surprising what a mundane letdown Mastermind is. He used to dependably come through every spring or summer with a newly polished and refined full-length that made me want to own a yacht more than ever before. This time, he has served up an uneven, redundant retread of classic Ross-isms that just sound stale. It’s particularly frustrating because Mastermind sounds less like Ross and more like what people who don’t like him think all his music sounds like.

Most of us aren’t entrepreneurs or creatures of obscene wealth, but there’s a big part of Ross’ career that makes us feel like we’ve taken the journey with him. Each album, from Port of Miami to Trilla to Teflon Don, has felt like a complete statement with Ross always growing as a lyricist while maintaining his ear for fresh beats that would go on to spawn several dozen imitators in their wake. Ross has set himself a high standard that Mastermind falls woefully short of.

The Mr. Brainwash-designed cover should have been a red flag that Mastermind would follow a by-the-books blueprint on how to try too hard. While Ross has always delivered by staying within his well-defined, self-made lane and making that lane expand, here he’s invited in too many other elements and caused an abysmal traffic jam. Ross blurs the lines between reality and his on-record “Rick Ross” character by mentioning both his real-life drama of gangs attempting to have him killed (going as far as using news clips and 911 calls covering the incident) and the business aspects of the artists he’s made stars out of through his Maybach Music label. While I’m all for suspending one’s disbelief when enjoying a work of art, it’s just a bit perplexing and subsequently distracting on Mastermind to figure out exactly which disbelief I’m supposed to be suspending. On top of that, Ross also tries to appeal to more traditional hip-hop heads by quoting Wu-Tang and Camp Lo on “What a Shame” as well as Notorious B.I.G. on “Nobody.” Then he name drops everyone from Dana Dane to J Dilla to Mac Dre. All of these references sound uncharacteristically forced.

But Ross contains multitudes and his listeners have given him plenty of slack over the years for some of the most off-color remarks he’s made in his lyrics. In terms of sheer awfulness, Ross may have finally topped his deplorable “children in Haiti” line from 2010’s “Life Fast, Die Young” with Mastermind’s “BLK WHT:” “Trayvon Martin / I’m never missing my target.” Ross has defended the line, saying that he’s “never going to let the world forget that name.” But let’s be real; he’s boasting about how accurate he is via the metaphor of a dead, unarmed teenager. I don’t believe that music has to live up to some unspoken moral code, but even if you ignore the shock aspect of it, which is challenging, the line is straight-up uninspired and wack. Ross knows what he’s doing with those words, but he had no idea what he was doing with the song itself and, by extension, the album. While there are a handful of new ideas near the end, too much of Mastermind sounds like the reheated leftovers of Wingstop lemon pepper wings we ordered from Ross three years ago. And while it is fun to hear the Ross tweak his character, like his aforementioned obsession with lemon pepper chicken wings, this is the only entry in his catalog that doesn’t stand up to his other works. Why would anyone listen to Mastermind’s Jay-Z assisted “The Devil is a Lie” knowing that they could hear the similarly-aimed but much better executed “Free Mason” off of 2010’s Teflon Don? Even the skits here are boring and uninspired. The album is redeemed a bit by the closing tracks and the surprisingly stellar bonus tracks on the deluxe edition (namely the excellent Scarface and Z-Ro collaboration “Blessing in Disguise), but otherwise, it’s really, really not good.

[xrr rating=3.25/5]Rap imprint Top Dawg Entertainment (not to be confused with Kid Rock…