There’s a popular belief that Hollywood destroys foreign directors. A common piece of evidence: pre-Hollywood John Woo made Hard Boiled and The Killer. Hollywoo made Mission Impossible II and Windtalkers. Like most popular beliefs, it’s not quite true, but the same argument could be made of a slew of filmmakers, up to and including Peter Jackson. Prior to his epic, Oscar-winning Lord of the Rings series, Jackson was primarily known for odd, gross-out horror films like Braindead and Bad Taste. Film nerds everywhere can lament that the man who once made junkie puppets have group sex in Meet the Feebles has since devoted his career to ever-expanding adventures in Middle Earth, but there’s a film in between the weird low-budget horror of his beginning and his Hollywood years. That movie is The Frighteners.

Released in 1996 (otherwise known as the year of Space Jam), The Frighteners is a throwback of a horror film. In many ways, it feels like a lost story from “Tales from the Crypt,” the much-beloved, cheesefest anthology television series (based on an even earlier EC Comics version). There’s a reason for that: Jackson and his spouse/collaborator Fran Walsh wrote the original story as a treatment, which was picked up by Robert Zemeckis with the precise idea of turning it into a “Crypt” spinoff. Considering that the other film spinoffs have included Bordello of Blood and Ritual, it’s probably a good thing that Zemeckis decided to turn over directorial duties (while remaining as producer) to Jackson, and The Frighteners remained an independent property. 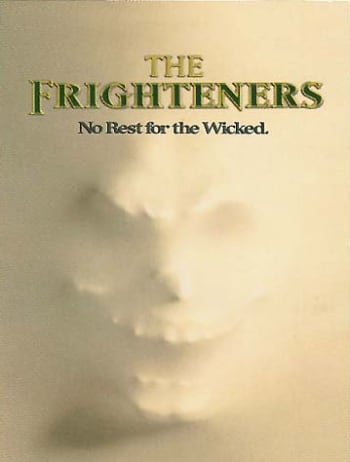 But there’s an undeniable similarity between The Frighteners and “Tales from the Crypt.” There’s the balance between sincere horror and gallows humor (though no Crypt Keeper) throughout Jackson’s film similar to the best episodes of the show, as well as a cartoonish level of gore that suits the director. The plot, involving ghost-hunting, a long dead mass murderer (a perfectly cast Jake Busey) and the prospect of even the dead being able to be murdered, is best left without spoilers, but suffice it to say that it’s pretty weird. The film was also, in retrospect, a huge signpost toward Jackson’s predilection for visual effects. While his previous film Heavenly Creatures had utilized an impressive array of practical effects, The Frighteners had an unprecedented level of CGI effects. Much of it still looks impressive despite 18 years of progress, at least in part due to the comic book-like nature of the story; it makes sense that walls would be elastic and severed faces could chuckle as they trickle down tombstones in this world.

It also helps that Jackson cast a ringer as his troubled protagonist: Michael J. Fox. In his last major film role to date, Fox plays lead as Frank Bannister, a phony psychic investigator who hides his actual ability to see ghosts under sham haunting and low grade cons. At age 35, the actor was clinging to the last of the boyish charm that made him a star, but it works perfectly for The Frighteners. Frank comes off as a haunted man who is just managing to survive on his wits, but only in the thinnest, most desperate ways. While his romance with Lucy Lynskey (Trini Alvarado) never gels as much as the film might want it to, his best interactions are with his self-appointed nemesis, FBI Agent Milton Dammers (Jeffrey Combs). For his part, Combs plays Dammers as the hammiest of hams; watching his bug-eyed, squirmy performance, you could make a safe bet that Combs was simply allowed to vamp while Jackson kept the camera at a permanent Dutch angle.

Jackson and Walsh would go on to make more successful films, to say the least. The Frighteners was a commercial disappointment, but has managed to become a cult film over the years. And with good reason: more than the films that were actually made under the umbrella name, it is the spiritual heir to “Tales from the Crypt,” as well as a direct link between Jackson’s early horror films and his current blockbusters. Plus, it’s got the Grim Reaper slicing a ghost cowboy in half. You’ll want to see it just for that.