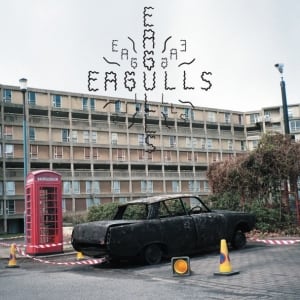 [xrr rating=3.5/5]The Leeds-based post-punk outfit Eagulls is a perfect illustration of how you can’t always trust the hype surrounding a band. While the group has spent the past four years prodding their way onto the scene with their brand of DIY aesthetics, thrashing, reverb-soaked guitars and tortured, yet sensitive, lead vocals, they really became famous—or infamous—after last year’s South by Southwest Music Conference when they offered up some choice words and images on their blog critiquing the American corporate musical structure. While they certainly weren’t the first to express discontent with the insane meat market that SXSW has become, their rant against, among other things, “beach bands sucking each other’s dicks and rubbing the press’ clit” was tasteless to say the least. If you ask average music blog-readers what Eagulls are all about, they are likely to cite their sophomoric blog stunts rather than their edgy, confrontational music.

With their debut, self-titled LP, though, the group proves that they don’t need such shenanigans to get their name onto the radar. Eagulls is a self-assured, rambunctious first album, one that finds the young band already outfitted with a distinctive, confident voice. Their aesthetic stands somewhere in the intersection of Iceage’s hardcore nostalgia, Joy Division’s exuberant nihilism and Killing Joke’s relentless energy (Eagulls’ lead single was accompanied by a B-side cover of “Requiem”). The most potent—and in some ways the most unlikely–ingredient in Eagulls’ artistic mixture is the Cure. Vocalist George Mitchell, with his romantically worn delivery style, comes off like a tougher Robert Smith during his gothiest phase. The guitars of Mark Goldsworthy and Liam Matthews also sound like the Cure on steroids, with their repetitive melodicism run through layer after layer of distortion and reverb.
After the first few notes of lead single and opening track “Nerve Endings,” it comes as no surprise that the band honed their craft for several years prior to releasing this first LP. The tune projects a kind of willful, joyful nihilism that comes via conscientious thought and artistic refinement, not through mere spontaneous improvisation. The tune is about frustration on a number of levels, most prominently sexual and artistic (“Stop singing that verse/ Stop feelings like that/ Stop singing that song.” This sense of alienation is invoked further on “Yellow Eyes” with the line “I can’t see it/ Can’t feel it/ Can’t hear it.” The band manages to keep the expression of their frustrations vague enough that they have a universal quality. Whether they are disgruntled with their own music, their relationships or society at large, anyone listening can relate to some degree.

“Though Luck,” the group’s most recent single, is perhaps the most accessible track on the record. The central guitar riff sounds more than a little like the Cure’s “Just Like Heaven,” and drummer Henry Ruddel’s four-to-the-floor kick drum almost renders the tune danceable. Of course, in the spirit of their SXSW letter, the group has to make the song less comfortable and groovy by running the whole track through so much reverb that it sounds almost anti-human. Mitchell’s lyrics are barely understood and the guitar lines are mushy rather than punchy.

Some will see the band’s homogeneity of sound from the start of the record to the finish as a sign of confidence and integrity, whereas others would probably like the boys to mix up their bag of tricks a bit. It’s true that the 10 tracks on Eagulls, when played back to back, can yield a tiring listen. But, the band has proven they have the ingredients for success and, unlike so many much older acts today, they already know who they want to be. “Footsteps” and “Soulless Youth” suggest variations in tempo and timbre that could lead to interesting avenues of exploration in the future. They have plenty of time ahead of them, and Eagulls proves the group is way more mature than their silly bloggings suggest.