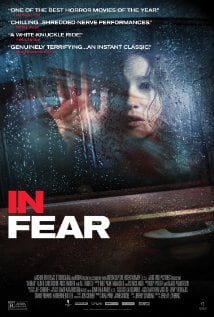 [xrr rating=2.0/5]It goes without saying that the feeling of dread leading up to the reveal of motive or the villain in a horror film is always scarier than the horror itself. The best scary movies prey on the fear of the unknown and some of the most unsettling ones exist with little explanation. We know something will be lurking around the corner in films such as The Shining, but we’re never sure what or which corner. Director Jeremy Lovering’s In Fear begins creepily enough, but when the evil finally steps out of the dark, that eerie feeling completely dissipates, leaving a poorly made film with a gossamer-thin premise without its best and only weapon.

The premise of In Fear is novel: Lovering shot the film in a way that its three actors were kept in the dark about what would happen or how the film would end. And while stars Alice Englert and Iain De Caestaecker seem really, really scared, that doesn’t necessarily mean that we will share in the fear. Instead, Lovering’s film feels just as circuitous and empty as its plot.

Tom (De Caestaecker) and Lucy (Englert) are a young couple who have only known each other a few weeks. When the film begins, they are en route to a music festival, but divert from the route when Tom makes a surprise reservation at a remote hotel. They soon find themselves trapped in their car in a maze. As the sun begins to go down and the car starts to run out of gas, the pair slowly realizes that they are pawns in a deadly game of cat and mouse.

In The Descent, director Neil Marshall uses the first half to create a horrifying film out of an ordinary experience (before devolving into science fiction), something that would have greatly improved In Fear. What if nothing was really out there stalking Tom and Lucy? What if the entire film was predicated upon the primal fears of darkness, being lost and the woods? It certainly would have been more effective than what Lovering has in store for his audience.

Making matters worse, Tom is a complete fool, one who makes unwise decisions that put the pair in jeopardy. Sure, Lucy barely knows the guy, but she does know him well enough to spend the night with him in some remote hotel. When Tom is confronted about some behavior that takes place at the beginning of the film, he acts as if he’s being accused of blowing up the World Trade Center. He merely spilled some chap’s drink at a pub and then acted petulant about it. Oooooooh!

In Fear sputters to a halt when Lovering adds a third character to the mix, a man who may be the couple’s tormenter or just another victim. All of it leads to a conclusion that makes absolutely no sense whatsoever. Lovering may have built In Fear on an interesting conceit, but sometimes an idea needs something more, like a good beginning, middle and end.