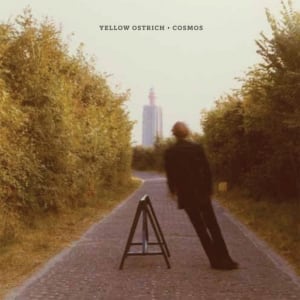 [xrr rating=3.0/5]Despite their continued musical consistencies, Yellow Ostrich seem to fly slightly below the radar of most indie-rock aficionados. Since the band’s self-titled debut back in 2009 the group has been steadily improving upon their foundations, with each subsequent release revealing layers upon layers of wonderful intricacies and lofty ambitions. On Cosmos the band continues on with this tradition, drawing inspiration from the titular vastness along with the work of astronomers like Carl Sagan. Obviously the group has drawn the name of their album from Sagan’s now iconic PBS series, but there’s much more to Yellow Ostrich’s Cosmos than stargazing and wishful thinking.

The album starts slowly with introspective vocals washed in reverb, distant synths and drawn out chords, but once vocalist Alex Schaff laments on being “the terrors in your eyes” the song transcends its dreamlike state and is thrust into a driving rhythm that serves as an excellent display to the dynamism on display in Cosmos. Each track feels like a refreshing burst of energy, whether it be the diverse array of percussive elements that flourish the backgrounds of these tracks or the lush sonic embellishments that comprise the instrumentation, there’s always something that the listener can sink into and hone in on.

While Cosmos is certainly an enjoyable album, it also tends to suffer from a lack of innovation. There’s still a lot to love, Schaff’s lyricism has an inclusive quality that provides the listener with an immersive listening experience and the syncopated rhythms that line much of these songs can certainly compel you to bob your head or sway to the beat. However, all of Yellow Ostrich’s strong points are simply done better by other artists. Let’s look at the album’s lead single “Shades” for example, it feels like it would have felt equally at home on Local Natives’ Hummingbird.

The difference between acts like Local Natives and Yellow Ostrich is that Local Natives give much more than disjointed glimpses of a character’s persona, they dig deep into a narrative core and force the listener to feel for the songwriter. Yellow Ostrich’s tracks are certainly aurally enjoyable, there’s plenty of catchy melodies and sonically adventurous soundscapes on display here, but there’s a sense that I can’t find this record becoming a part of my daily soundtrack.

Cosmos shines in the same way that it suffers, Yellow Ostrich’s goals are grandiose and when they hit home they’re something to truly revel over. However, there’s plenty more moments where I find myself listening to the album as background music as opposed to an attention-grabbing piece of art. But that doesn’t mean that this isn’t worth checking out. Tracks like “My Moons,” “You Are the Stars,” and “Things Are Fallin’” combine the weighty scientific aspirations of the album brilliantly with introspective, romanticized lyrics.

On the penultimate track “Things Are Fallin’” Schaff seems to cherish the entropy we’re surrounded by, “Things are falling/ And I’m grinning” he croons as he goes on to sing of staring into the sun atop a smooth beat filled with reverb-soaked percussive hits and a simplistic guitar line. As the track begins to unfurl the listener begins to get a picture of what the band’s ambitions have been all along, seamlessly combining electronic instrumentation with organic instruments and subtle vocal sampling. If the rest of Cosmos was as expansive and satisfying as “Things Are Fallin’” then it would be nothing short of stellar. But instead the album will likely get lost in the sea of indie-rock albums that also display subtle electronic tendencies while reveling in smooth harmonies and shimmering instrumentation.