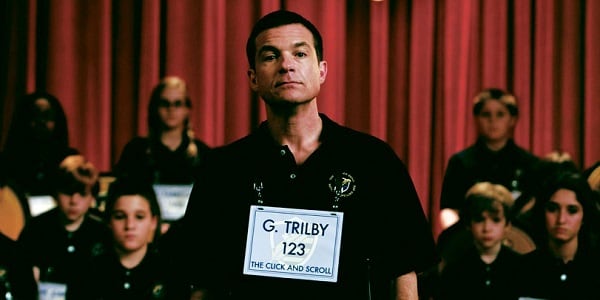 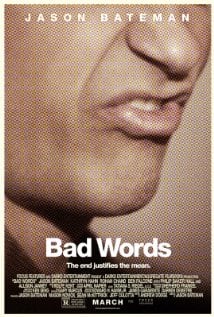 Forcing small children to utter adults-only vocabulary is one of the lowest forms of comedic bondage. If hearing a 10-year-old talk about “auto-fellatio” makes you chuckle, by all means go out and see Jason Bateman’s directorial debut, Bad Words. I’m not trying to sound like a ninny here, but that example is the kind of cheap shot comedy Bateman and screenwriter Andrew Dodge see fit to hurl at us in this story about a grown man who, via a loophole in the rules, enters a kids-only spelling bee.

Moralizing aside, Bad Words hangs on a thin premise: what’s gotten Guy Trilby (Bateman), a clean-cut proofreader, so stinking mad that he hopes to derail a children’s spelling bee? I won’t spoil it here, but we don’t find out until the end anyway and boy, is it lame. So lame, in fact, it almost negates the plodding, mean-spirited 70 minutes that come before it. Bad Words suffers from what I call Groundhog Day syndrome, wherein a cynical protagonist eventually becomes nice. It’s a given that Trilby will become “nice” by the time the credits roll. I wish I cared enough to bemoan this transformation.

Some genuine laughs might save Bad Words from late night cable hell, but they are really too scarce to recommend the film. Most of the time, we get Trilby lathering insults and gay panic jokes on anyone who crosses his path. This includes the staff of the spelling bee (Allison Janney and Philip Baker Hall) and his competitors. Trilby even puts ketchup on the seat of a young competitor and dupes her into believing she’s entered womanhood right there in the middle of the competition.

So where does the heart come in? Trilby befriends Chaitanya (Rohan Chand), a 10-year-old loner who may turn out to be his staunchest opponent. That doesn’t stop Trilby from taking his new friend out on the town where they drink booze, look at boobs and come up with an elaborate practical joke involving a lobster. The bad behavior does feel refreshing, especially in the age where Richard Linklater pussed out with his Bad News Bears remake by having the kids drink non-alcoholic beer. But Trilby is just too damned much and Chaitanya endures his racial remarks (he calls the little guy “slumdog”) with a grin.

Also along for the ride is a reporter, Jenny (Kathryn Hahn), who has some pretty bizarre sexual hang-ups. She is there to find out just why Trilby is undertaking such a lame venture. It’s supposed to make the mystery more mysterious. What it does is make the mystery that much more dull when all is revealed. Bateman has failed in his first outing as a director. Bad Words is a plodding mess punctuated by scenes of audacious bad taste. Halfway through, I simply said, “Fuck it.” And not a good way.