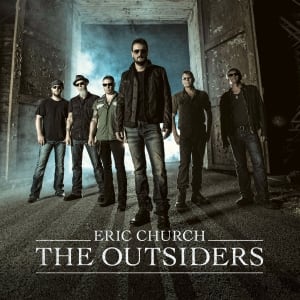 [xrr rating=3.0/5]I bet you cannot think of another country album whose audible influences include Black Sabbath. The title track and first single off Eric Church’s new album The Outsiders has the hard rock attitude of a recording artist who feels out of step with country music but is likely to find hard rock acceptance elusive. It’s anthemic and defensive, boasting, “That’s who we are/That’s how we roll.” “The Outsider,” which Church himself describes as a cross between Waylon Jennings and Metallica, builds to a frenetic, Black Sabbathian head-banging climax.

It’s corny as hell, a new kind of country music cornball in a genre sometimes dismissed as cornball by definition. The Outsiders sounds like a crossover attempt, but Church has crossed over before, and with better results. Unlike the typical country star, Church co-writes the songs he sings and he’s rocked out ever since “Before She Does,” the opening track on his 2006 debut album Sinners Like Me. Church’s previous albums struck the right balance between country and rock. The Outsiders tips that balance, and not in the direction Church was aiming for.

Church was born in North Carolina and grew up in Nashville, influenced by the usual suspects like Merle Haggard (see the early track “Pledge Allegiance to the Hag”) and Waylon Jennings, but also giving props to Metallica and AC/DC. With a name like Church it’s no wonder he writes about sin and the Devil, a contemporary variation on the transgression and guilt that has been part of country music as long as there have been drinking and cheating songs.

The Outsiders is ambitious but wildly uneven, the over-produced, harder rocking tracks striking an embarrassing pose that he managed to avoid on earlier albums. Church and the members of his band all wear sunglasses on the album cover, standing en masse in a declaration of Reservoir Dogs cool, but the album’s strengths are conventional and decidedly uncool. The best songs here aren’t the rockers, but straight country songs (with rock flourishes) that sing familiar country music tropes. “Cold One” sounds like it could be a jukebox hit at your favorite honky-tonk. Just like it sounds, it’s about beer and a woman who got away, as quintessential a country music tableaux as you could devise, rock riffs bolstering up an old fashioned country song. “Roller Coaster Ride” is sprinkled with synth-washes and hard rock musical breaks, but the chorus is solid country pop. My favorite song on the album is the most country: “Talladega” is a musically wistful tribute to the Alabama racetrack that’s a staple of the NASCAR circuit. Can you get more country than that?

The album’s confident high points make its lows more cringe worthy. The Outsiders careens off the road with the ambitious 8-minute suite “Devil, Devil,” about, naturally, good and evil. The song itself is a story of temptation that suits the Church’s rock aspirations better than most of the album’s harder tracks. But it’s marred by a long spoken-word intro called “Princess of Darkness,” with eye-rolling lines like, “She’s been called a glistenin’ Devil/She’s good at keepin’ score/If you make it she’s your Savior/if you don’t, she’s a whore.”

“That’s Damn Rock and Roll” is another would-be rock anthem that sounds flat to these ears. But “Give me back my Hometown” plays the neat trick of quoting the synth line of “Won’t Get Fooled Again” on something that sounds a classic country anthem. Church has a strong back catalog and is one of the most consistent songwriters of the new country music. The best tracks on his new album stand with any of them. Unfortunately, his evolving relationship with hard rock has taken a strange and unpromising turn and it’s in need of a course correction.