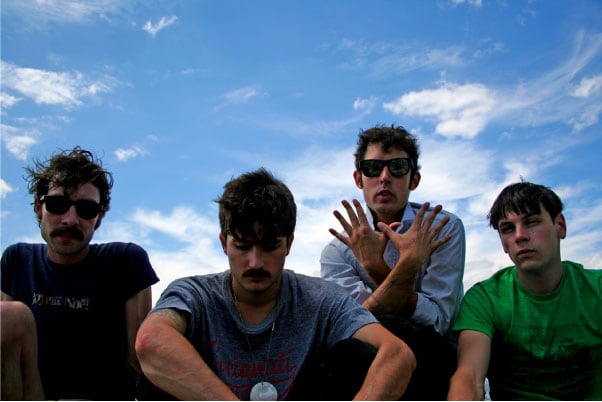 A Georgia native by birth but a prisoner of the suburbs at the hands of parents who despised going into the sprawl of Atlanta’s city proper, my connection to the local art scene has been effectively nonexistent, a problem exacerbated by going to college at Auburn and subsequently moving to Birmingham for work. Thus the chance to see two stalwarts of Atlanta indie music, Deerhunter and Black Lips, so shortly after my return to the metro area did not immediately hook me. The former’s Microcastle made a brief impression at the time but failed to engender any long-term devotion, while the latter was a new name entirely. Thankfully, I listened to the prodding of an online acquaintance in town and secured a ticket. What followed was less a show than an enlightenment.

The night of belated Southern music education began with opener Lonnie Holley, a fascinating figure in outsider art who shuffled on stage and sat down at a keyboard so casually he turned the Variety Playhouse into his own parlor. To describe Holley’s music presents a greater challenge than talking about the two co-headliners who followed him. Churning out smacked clusters that sounded like the toy piano of “I Wanna Be Your Dog” repeatedly layered over itself, Holley, barked out extended, seemingly stream-of-consciousness lyrics, delivering recitative in blues cadences. Eventually backed by a band that included Deerhunter’s bassist Josh McKay and frontman Bradford Cox on drums, Holley made such a stirring racket on his own that he could have gotten away with being a one-man band. At times, his looping, spacey tones were redolent of Bernie Worrell covering The Disintegration Loops, locked patterns that collapsed under the weight of mounting tears. Holley provided a trance to ease the audience into the night, albeit shot through with enough tension and soul to prep for the coming show.

Holley’s brand of trance-like music laced with bursts of untamed, dirty soul proved a fitting aperitif for Deerhunter. The discrepancy between a band’s studio output and their live presence is often so wide it scarcely bears noting, but the sheer ferocity of Deerhunter’s show does not simply produce their music in its true context but provides an entirely new prism through which to view them. From the opening strains of “Earthquake,” the lead-off track from 2010’s Halcyon Digest, the band displayed an energy rarely heard on their studio output, inverting the torporific haze of the studio version by giving the impression of being consumed by a dream instead of emerging from one. If Deerhunter albums can sometimes give the impression that the listener is intruding upon their Krautrock- and shoegaze-flavored escapism, their show acted as a conscious invitation into that sonic realm. It’s a minor difference, but one that infused even the older material with the direct, garage-oriented spirit of their most recent LP, Monomania.

Much of this energy came from the rhythm section of drummer Moses Archuleta and bassist McKay. The band’s albums impressively keep the bass from being buried in the mix of heavily distorted guitars, but Archuleta and McKay are not simply present live but the driving force: synched kick drum and basslines sent pulses that sliced through the triple-guitar wash as both a bracing wake-up from the lulling squall and the metronomic tick-tock that puts hypnotizes the listener for that oneiric noise in the first place. To be the anchor of an expansively oriented group is always a thankless task, but Archuleta and McKay’s interplay recalls the contributions of Michael Henderson and Al Foster to Miles Davis’ mid-’70s oeuvre, whose own basic patterns established a tether that could guide the rest of the players back to Earth. That the pair’s connection is so strong is only more impressive given how recently McKay came aboard, joining during the recording of Monomania along with third guitarist Frankie Broyles.

McKay’s booming, guiding presence and Broyles’ ably blended-in guitar additions only underscored the night’s demonstration of that much-vaunted group democracy people always mention when discussing Deerhunter. On extended workouts of songs like “Desire Lines” and “Blue Agent,” the breakdowns occur as a remarkably honed group listening to each other’s variations and adjusting accordingly. During their mammoth extension of Microcastle’s “Nothing Ever Happened,” my mind leaped to memories of hearing Television’s “Marquee Moon,” another guitar showcase that, to these then-20-year-old ears, rewrote the possibilities of what dynamic, exhilarating guitar playing could be. But Television’s M.O. was one of rivalry, of Richard Lloyd’s chords and Tom Verlaine’s lines darting after one another like cobra and mongoose; that style can be heard on other live renditions of this song (check out this performance from 2011’s Pitchfork Festival), but this version was not a game of one-upmanship or tension but a collective effort toward a constantly changing sound. To even refer to the swelling of noise that elongated the track a “breakdown” is misleading; this was a reconstruction. 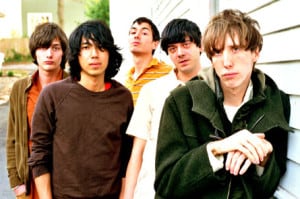 This sense of building toward something, rather than hiding in the comfort of loops and squall was matched by the general aura of the band. Cox’s vocals, aided by his own electronic processing and some slight muddling over the P.A. (the only flaw in the Variety’s otherwise impeccable sound), achieved the impressionistic, instrument-like quality he tries to give his vocals, slurring out some of his downer lyrics for a tone that rendered his delivery more joyful. Cox appeared to be in high spirits, pausing not only to shout out the other acts playing that night but to note his relatives in attendance, particularly his mother, who came to the show after months of being unable to walk. No less touching was the way he threw focus over to Lockett Pundt for the latter’s lead on “Desire Lines,” warmly announcing, “My best friend in the world!” That camaraderie helped bring out the cautious optimism of the Halcyon Digest material, as well as belatedly confirming Monomania’s stylistic left-turn not only as a logical progression for the band but the logical progression for a group that, on-stage, ceased to be a democracy reflective of our own messy, contentious real-life model and became one more in-tune with what we hope democracy to be.

Where the previous set was revelatory and awe-inspiring for a rapidly-converted skeptic, the Black Lips came on stage and mainly confirmed what can be gleaned even from a cram session through their increasingly well-produced but always agreeably shoddy discography: that they are the best damn rock ‘n’ roll band in the land. To have even prepared for a Black Lips gig seems, in retrospect, unnecessary, as their songs are all sing-alongs that can be picked up within seconds. At one point, a projector at the back of the room switched on, and it came as something of a surprise that it did not simply begin to play images of that little white ball bouncing over lyrics. They were there to promote their upcoming release Underneath the Rainbow, but for the numerous announcements for each new track it would have been hard to discern what songs were being played live for the first time and what has been a staple of their set for years.

Only the cowpunk twang of some of the new stuff gave it away, as otherwise the grit of something like “Boys in the Wood” (a number akin to the Stones providing an original song for the Deliverance soundtrack) fit perfectly with classics like the Beatles-perverting “Dirty Hands” or set-opener “Family Tree.” The Black Lips’ music has sounded from the start like it got lost 30 years ago on the way to Lenny Kaye’s place for inclusion in the Nuggets series, and if their heavy inclusion of Underneath the Rainbow material made a case for it being their best LP since 2005’s “Let It Bloom,” it also suggests that the title of their erstwhile masterpiece pegged them early on. It cannot be said of the band that they have grown so much as they have engaged in the latest of their perennial cycles, dropping off during down times and returning just as beautiful with the spring.

If Deerhunter communicated a sense of release and matured sophistication without moving more than a few inches from their standing positions, the Black Lips accomplished much the same while pogoing along with their bashed chords, dodging the battery of beer cans and bottles lobbed at them and ignoring the swarm of stage invaders who came and went in neverending crowdsurfing. The previous act displayed a kind of all-for-one, one-for-all democratic unity, but the Lips came off like a newly unified Italy, or, to pull from more relevant roots, like a rebellious confederate of states pulled back into the Union’s fold. The band acted as one ramshackle whole, but spikes of individualist personality shone through, from drummer Joe Bradley constantly taunting the crowd to Cole Alexander and Jared Swilley paradoxically sharing ego as each assumed frontman status. The net effect of this capacity to be an exceptionally tight punk act as every member does his own thing could be best seen in two songs. On record, “Bad Kids” manages the nearly impossible by being a too simplistic and on-the-nose a summation of the band’s aesthetic and ethos, but live it lived up to its statement of purpose as friends, colleagues and fans bum-rushed the stage like an elementary school play cast coming out for a staggered group bow. The other was the final number of the night, a Lou tribute in the form of cover of the Velvet Underground’s “Run Run Run” that paid due respect to the source of not only the Lips’ smart-stupid din but the more ambitious “avant-garage” practiced by their peers in Deerhunter.

No doubt fans of the two bands will find nothing surprising about a show like this, what with the many times the groups have shared billing and proved themselves viable and exciting live acts years ago. Indeed, long-term diehards may even find these performances take compared to the early days of Deerhunter’s blood-smeared, sundress-clad shenanigans or the Black Lips’ urophagia. But these are groups who have endured all the pitfalls of hype to deliver the goods through their increasingly assured musicianship. Perhaps the greatest pleasure of the evening was hearing in Deerhunter’s turns toward garage and the Black Lips putting some extra crunch in their riffs a reclamation of the very notion of “Southern rock” from the baggage of good ol’ boy posturing and interminable guitar wanking. This is Southern rock not of the fantasized and fetishized Atlanta burned to the ground by Sherman but of the disjointed, hard-to-classify metropolis that has gradually risen from the ashes in fits and spurts. Gregg Allman once complained that “Southern rock,” with its emphasis on blues and the geographical location that birthed stars like Little Richard and Elvis, was a redundancy in terms, akin to calling it “rock rock.” What Deerhunter and the Black Lips suggested with their set is that by rescuing the regional variant from decline, they may yet save the whole.