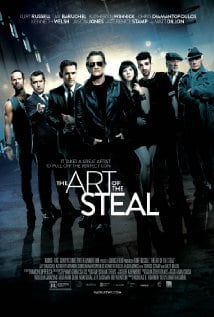 [xrr rating=4.0/5]Five and a half years in a Polish jail gives a man time to think. Crunch Calhoun (Kurt Russell), convicted art thief, spent his years thinking about his slimy half brother Nicky (Matt Dillon), the one who betrayed his fellow criminals and sent Crunch up the river. It’s not so much that he had to do the time, but as Crunch tells it in the backstory, “Without trust, you’ve got anarchy.”

It’s this adherence to a code of thieves — the code that Crunch himself eventually admits is bullshit — that propels the story in the comedy-heist film The Art of the Steal. Russell leads a stellar cast of your standard heist flick cops and robbers, everyone after the same art, but for wildly different reasons. These are characters who yearn for a more organized, stable and aesthetically-pleasing world, and everything in their lives reflects this, every decision, every lie, even the most minute details of their robberies. From the perpetually flustered Agent Bick (a terrific Jason Jones) to the somewhat accidental sidekick Francie Tobin (Jay Baruchel) has a clearly defined vision of what life should be, and this particular job is their means to an end.

After being released from prison, Crunch finds himself working as the stuntman for a low-rent motorcycle show, his stage persona half Elvis without the charisma, half Stuntman Mike without the menace. As he’s laid up at home after deliberately crashing his bike for a few hundred bucks, he’s accosted by a man looking for his estranged half-brother Nicky, who has screwed him out of Georges Seurat’s Model from the Back (1886). The priceless painting isn’t there, but Crunch’s cycle is, and is taken in lieu of the Seurat.

Screwed once again by Nicky, Crunch figures he has little choice but to join in on one enormous, final heist: The theft of a Gutenberg printing of the Infancy Gospel of James. Tucked away inside a warehouse at the Canadian border, the authorities have not yet identified the book, and there is a narrow window of opportunity to liberate the text on behalf of a rich religious benefactor. In close pursuit are Interpol Agent Beck and his assistant Samuel Winter, played by Terence Stamp, displaying the perfect mix of comedic timing and hostile indifference. Winter is a convicted art thief who has agreed to help Interpol in exchange for a lighter sentence, but the agency believes they’re on the trail of the Seurat, and are completely unaware of the existence of the Gutenberg.

The plan that Crunch’s group concocts is hilarious and tasteless, peppered with rogue eccentrics and brief but funny tangents that give the film a warm, cozy feel, just what you want in a heist flick. But The Art of the Steal proves that there is some truth to the weakest link cliché, as Matt Dillon and his unconvincing hair very nearly do the film in. Displaying a distinct disconnect from the material and almost no comedic chops whatsoever, Dillon is dead weight in every scene he appears, his lackluster performance thankfully — but just barely — overwhelmed by the rest of this strong ensemble cast, including the handful of cameos.

Are there plot holes? Hell yes there are plot holes. The Art of the Steal couldn’t respect itself in the morning if it was forced to adhere to petty things like logic or physics. When our rag-tag band of antiheroes casually mention that the warehouse they plan to knock over, despite holding millions of dollars of contraband, is conveniently devoid of even a single security camera, that’s your guarantee that this film understands the rules of comic irony. It’s also a film that respects that modern audiences are thoroughly familiar with the common tropes of a heist film, which is why the The Art of the Steal is not really about the steal at all. It’s about those few moments where reality briefly matches our ideals, and the satisfaction of controlling, if only for a second, that which has been entirely out of our grasp. Leave the tightly-choreographed capers to Jules Dassin; The Art of the Steal is about the unmitigated joy of revenge.