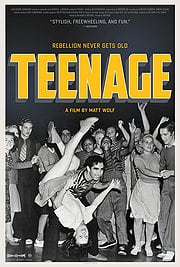 [xrr rating=3.5/5]They say age is just a number, an idea backed up by the thesis of Matt Wolf’s nonfiction Teenage, which opens with one of its four narrators noting that the “teenager” is not only an invented concept but, fittingly, a relatively recent one. Based on Jon Savage’s book of the same name, Teenage charts the development of the teen as a cultural entity from the late 19th century up to 1945, conspicuously halting well in advance of Elvis breaking out and kicking youth culture into high gear. Yet if gyrating hips, war protests and glam are absent in all but a concluding, generation-bounding montage, Wolf’s film nonetheless digs under the veneer of respectability and propriety of pre-Boomer generations to find the first ripples of rebellion and angst in adolescence.

To back up its tacit assertion of the pan-generational adolescent struggle, the film links seemingly instinctual drives to historical paradigm shifts that helped coalesce and manifest these feelings. The film starts properly with the passing of child labor laws that helped create the teenager by preventing the seamless transition from child to factory worker. Then, century-old events start to form disquieting parallels with the present: the senseless waste of World War I, egged on by a callous older generation who fed the young into a meat grinder, prompts a generation that retreats into a hedonism that is quickly cut short when the economy collapses. The voiceover perspectives of Lost Generation layabouts, idealistic Hitler Youth and increasingly strident and noncooperative African-Americans are at once specific to their periods and universal in what they represent, especially as it becomes clear that teenagers of each generation end up fighting the last, seeking to win some kind of self-control as life-altering decisions are made without their consent.

True to a movie about teenagers, however, this historical context acts mainly as an intelligent, politically aware bedrock for an emotional, impressionistic response to these objective stimuli. Ben Whishaw, voicing the diary entries of the archetypal post-WWI British cads, speaks of kids of that age hating their parents, a common sentiment but one that carries the added menace of the young reeling from an unprecedented form of warfare and carnage. Warren (voiced by Jessie Usher), the black child, demonstrates how things change with time, viewing his own involvement with the Boy Scouts as a point of pride and integration where earlier it had been discussed in terms of being pre-recruitment military training to keep young men in line. His own form of passive upheaval may be a small gain, but it feels significant for the palpable sense of belonging it gives him in an otherwise caustic and unfair society. On the flipside, the Hitler Youth girl (the voice of Julia Hummer) is emblematic of the dangerous ways that youthful zeal and passion can be corrupted, sucking her into the promise of a better life during economic and social pandemonium and only becoming clearly wrong after it’s too late to escape. The personalizing effect of the film’s assembly, turning archival footage and PSA social instruction filmmaking into a film that manages to reflect the kids’ POV instead of their judgmental elders, only compounds the sense of familiarity felt with these real-life-but-archetypal people, and it makes it all the easier to celebrate their little escapes and bemoan when they take the wrong path.

Of course, no movie about teenagers would be complete without music, and Deerhunter frontman Bradford Cox supplies a score that clearly comes from the modern age but, at its best, evokes the universal youth the film seeks to convey. When the score does incorporate some period-appropriate music, it does so in ethereal, unorthodox ways that partially restore the music’s context, as when the Jazz Age is rendered through faint trumpet loops that give the repeated second or two of hot jazz an almost free edge, communicating some of the now-dated music’s sense of novelty, even danger. At times, Cox even pulls in music from the future to comment on the past, as when WWII footage is matched with a driving rhythm redolent of a Krautrock motorik beat, its locked but tense groove adding to the sense of unease as German kids begin to turn on the fascists they initially embraced. Yet the defining musical moment does not belong to Cox but to Ol’ Blue Eyes, as footage one of a young Frank Sinatra’s concerts sends bobbysoxers into paroxysms of euphoria and lust.

The scene not only anticipates similar responses to Elvis and the Beatles, it links teenagers’ creative escapism with their cultural and social identity. The voice actors regularly deliver direct lines about the feelings of adolescents, their hang-ups and their joyful sense of self-discovery, but Teenage admirably lets its collage speak for itself in showing how the very immaturity and naïveté of youth makes them a powerful agent of change. And if the final montage of Elvis, Vietnam, the Berlin Wall and so forth perhaps makes this case too bluntly, it also illustrates the snowballing impact of the cyclical process of generational strife, repeating the same basic actions of defiance while constantly pushing forward that which is being defied. Seeing it all in a flash, the folly of youth seems the most strategic means of social advancement in the world.