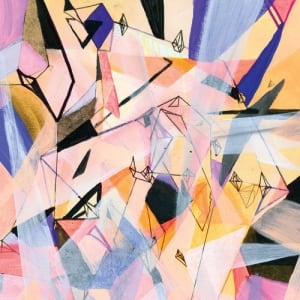 [xrr rating=3.0/5]The soul revival feels like it’s been in full effect lately, but few acts are doing it the way that Ava Luna is. While many acts are pulling hard to revive the old sounds of Motown, Ava Luna is ripping it from its foundation and thrashing it around amidst an array of psychedelia, punk infused funk-rock and frenetic forays into general aural madness. Electric Balloon is an album unlike many others; it fits snugly into its own little niche and fleshes out a world of nervous energies and danceable refrains.

From the opening sounds of “Daydream” it’s clear that Electric Balloon is going to be a rollercoaster of an album. With acid-jazz horns bobbing and weaving in and out of the mix, Ava Luna crafts a wild track that’s filled with equal parts of driving rhythms and simplistic vocal styling as it is expansive and experimental jams. If there’s anything that Electric Balloon proves to be, it’s volatile. Tracks like “Crown” can glide along with sultry vocal melodies that float wistfully above the mix, but give it a few minutes and it will deviate into hurled shouts and screams that are brilliantly juxtaposed by bright vocal harmonies.

Ava Luna’s aural explorations are just zany enough to draw the listener in, but they do a good job at never deviating far from their core attraction, which is wonderfully arranged tracks that are soaked in neo-soul sounds. The ever-changing textures make for an immediately engaging listen, vocal duties are tossed around between leader Carlos Hernandez, Becca Kauffman and Felicia Douglass, providing a deeper sense of spontaneity amidst some already chaotic music.

Think of Ava Luna as the weird cousin of Dirty Projectors, full of eccentricities and manic bursts of skepticisms. It feels like once the band has clenched onto an easy to digest refrain they’re already breaking down the foundation and thrusting the listener into a new jaunting, angular piece that shifts just as swiftly. If you like things to get strange then you’ll certainly find a lot to love on Electric Balloon, but otherwise the album might turn you off a bit.

There’s a hint of new-wave influences that bleeds in, some tracks like the titular “Electric Balloon” begins to feel like a contemporary take on acts like Talking Heads, fueled by subdued bits of frenzied musings. Ava Luna draws the listener into some seriously wild soundscapes, dripping with a sense of dreamlike wonder and bleary-eyed revelations.

The band greatly benefits from their shared vocal duties, as an album filled with too much of Hernandez’ fevered vocal acrobatics could prove to be a bit unpalatable. Ava Luna describe their sound as “nervous soul,” and much like anything that gets so tightly wound, it’s liable to unfurl at unexpected and unpleasant times.

But for all of the strangeness and inventive sounds, there’s still a lot of Electric Balloon that’s rooted in contemporary sounds. Tracks like “Hold U” and “Aquarium” are R&B inspired fits of indie-pop, but amongst the rest of the album they feel a bit out of place. Tracks like that feel like the band is still toying with the idea of accessibility, whereas “Judy” finds the band delving deeper into the proverbial rabbit hole.

Electric Balloon is still an incredible album from this young act. For a sophomore release the band has proved that they’re not afraid to get weird and inventive, but still finds that they’re exploring their own identity. Indeed, Ava Luna is a bit like a balloon, filled with spastic ideas that are bouncing to and fro, and sometimes they’re bouncy, fun and joyous—but then there’s bits where that frenetic nature leads to overinflated ideas and that creative bubble bursts into a fit of manic soundscapes.