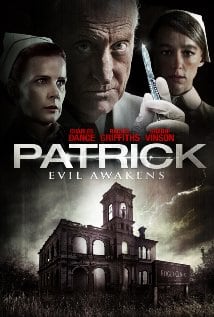 [xrr rating=1.0/5]Patrick (Jackson Gallagher) lies in a comatose state after killing his mother and her lover. The staff of the psychiatric clinic that keeps him alive treats him with equal parts neglect and sadistic abuse. Newly hired nurse Kathy (Sharni Vinson) discovers that the lost patient has telekinetic powers. Can Kathy penetrate her patient’s emotional barriers? Are her reticent charge’s vengeful impulses too powerful to be redeemed?

Horror movies threaten us and their hapless victims with physical danger and horrible pain, but one of the most frightening prospects anyone can face is the inability to communicate. Imagine being trapped inside a body that to the outside world appears dead, while you are aware of everything that goes on around you, helpless to control it?

This is the potent idea behind Patrick. Director Mark Hartley made the excellent 2008 documentary Not Quite Hollywood, a survey of the exciting low-budget movies made during the heyday of Australian exploitation cinema in the 1970s and 1980s. One of the highlights of that doc was director Richard Franklin’s 1978 psychological horror film Patrick. You would think that Hartley’s remake of Patrick was a labor of love, respectful to the original and aware of what made it work. But it’s hard to imagine a more misguided remake. Hartley, clearly working with a “better” budget, follows the original film fairly closely, but he throws all the original’s modest, effective atmosphere out the window. What was an unassuming, creepy study of the fragile mind and body becomes a clumsy delivery system for cheap scares and bad CGI.

Hartley’s Patrick opens, like the original, in darkness. But the two approaches to darkness could not be more different. Franklin’s black screen is accompanied by a dissonant electronic buzz reflecting Patrick’s disturbed mind. Hartley’s more clichéd darkness is that of the basement morgue of a hospital that has apparently forgotten to pay their electric bill. A nurse wanders through the morgue, startled by something that goes bumps in the night, using her iPhone’s camera flash to guide her way to certain doom at the hands of the titular telekinetic madman.

Please. The best horror movies build scares through surprise and atmosphere, but Hartley, who knows a good horror movie when he sees one, is unable to apply the lessons of successful exploitation movies to his own movie.

Jackie (Sharni Wilson) is a new nurse at the Roget Clinic, an institution whose entrance sign indicates years of neglect on top of the unpaid utility bills whose repercussions are felt through the entire film. The sadistic Doctor Roget (Game of Thrones’ Charles Dance) heads the institution and puts harsh Matron Cassidy (Rachel Griffiths, who needs a new agent) in charge of Jackie and the other nursing staff. There are talented actors here, and Gallagher looks the part of the intense, quiet patient, but Hartley directs his actors as cartoon characters, and Vinson doesn’t achieve the difficult sensual chemistry with her counterpart here the way the leads of the 1978 film did. This remake piles on the gore, and there’s nothing wrong with that, but he also turns up the camp factor, the clinic staff made up of nothing but over-the-top clichés. If a mad doctor and evil nurse were not clichéd enough, the whole movie is cast in mood-lighting that sinks it into a land of darkness that, if I’m being generous, is perhaps meant to represent the darkness in Patrick’s mind.

Both the original film and this remake are steeped in how technology informs communication, the original’s typewriter replaced with, naturally, a computer. But from 1978 to 2014 there is also a clear decline in cinematic language. Richard Franklin’s film didn’t rely on tricks and clichés to get across its sense of unease and melancholy. Hartley tries too hard to update the film and, ironically, fails to communicate effectively, where it’s more cinematically restrained ancestor still speaks to us. This new mute, full of modern sound and fury, signifies nothing.