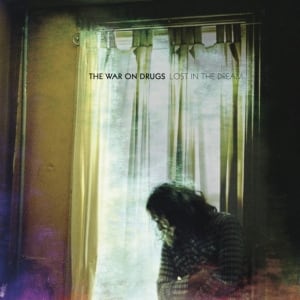 [xrr rating=3.75/5]The War on Drugs sure has a way of naming their records with accurate description. While Wagonwheel Blues nodded to its classic rock influence and 2011’s Slave Ambient adhered to more hazy, aerial underpinnings, Lost in the Dream could have only been better described if Darkness on the Edge of Town weren’t already taken. Conjuring drifting, illusory images obscured by light, distance and time, Lost in the Dream perfectly captures the atmospheric soundscape of a band that’s not necessarily evolving, but expanding.

Perhaps more than any other band, the War on Drugs elicit distinct motion through their songs. Cyclical patterns are avoided in favor of linear momentum, as if frontman Adam Granduciel is running from something, but clearly going somewhere. Granduciel sings about a moment, and then that moment is gone, just like the big, gliding guitars that overlay most tracks like gusts of wind. That texture is key here, as the blanket of production that has often congested Granduciel’s vocals and muddied the instrumentation has been entirely lifted, revealing greater musical strength and emotional depth. And with all but three songs here longer than five minutes, Lost in the Dream offers plenty of places to go.

Outside of production value, the big difference here is that these songs feel built by a band, not just a single person, and it sounds like it. Washing in like a symphony, album-opening “Under the Pressure” sets the tone as a cross between Dire Straits and “Boys of Summer.” There’s no standard format, as reverb-soaked guitars drip over floating synth lines as piano blocks propel the song forward like a spinning wheel. As with most tracks here, Granduciel provides a baseline as soaring guitar leads or keyboard passages branch off to emphasize momentum or drift into ambience. The layers that are built effortlessly transition, best evidenced on the slow and mournful “Suffering,” which adds electric piano and pedal steel, while subtle low-end sax helps guide the bouncy lead single, “Red Eyes.” The latter’s sharp open chords and driving synth recall ‘80s Springsteen, complete with Granduciel’s screeching whelps to accentuate certain verses.

The knock on the War on Drugs is that the dreamlike nature of their music makes many of their songs feel like drifting illusions, that substance lacks. While the record’s first-half instrumentation may not change that, the second half comes across as far more straightforward and also filled with some of Granduciel’s best writing. “I’m just a burning man trying to keep the shit from turning over again,” he sings on the pulsating and instantly accessible “Burning,” a cross between “Backstreets,” “Dancing in the Dark” and Modern English and featuring excellent multi-part harmonies. The band changes things up during the strummed Americana of the Whiskeytown-ish “Eyes to the Wind,” while “In Reverse” brings it full circle with a hazy close that harkens back to the front half’s atmospherics. As Granduciel goes backward, collecting what he’s lost along the way, he reveals, “I don’t mind you disappearing/ Because I know you can be found.”

Looking back is not a new theme for Granduciel, or for any songwriter for that matter, but on Lost in the Dream he manages a whole new angle. Though he may be on the move, or even struggling with loss, there’s solace not only in memory, but also hope. During “An Ocean in Between the Waves,” with Dylan inflection he sings, “How can I be free?/ Just want to lay in the moonlight/ And see the light shining, see you and me outlined.” Yet, he knows she’s still out there, following up that line by revealing, “It never gets too dark to find anybody at any time.” With Lost in the Dream, even though they’re clearly on a journey, the real War on Drugs has never felt closer, or easier to find. And for the listener, it feels quite liberating.