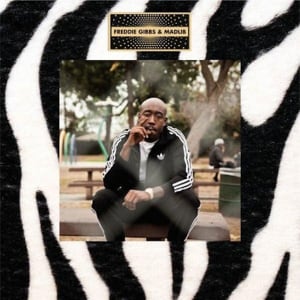 [xrr rating=3.5/5]Driving on the Indiana Toll Road through Gary, Indiana, one is bound to see some of the city’s negative stereotypes on display. Half-functional smokestacks and industrial waste provide a backdrop to crumbling, abandoned buildings. Yet there is a certain beauty in Chicago’s rustbelt sister to the southeast. Beaches and sand dunes on Lake Michigan’s shore are a sublime, natural contrast to the urban shocks just steps away.

Rapper Freddie Gibbs’ music closely resembles the contradictory nature of his hometown. He raps about some of the seedier aspects of the gangsta lifestyle with a smooth delivery that recalls the flow of Tupac. For this reason, L.A. producer/DJ/rapper Madlib seems like a natural collaborator. The multitalented artist is known for mixing together obscure B-sides and luscious soul samples to form a splendorous base for raw, free-spirited rapping. On Piñata, Madlib’s production values are the dune-laden, awe-inspiring Lake Michigan to Freddie Gibbs’ gritty urban ruins.

This isn’t to say that Gibbs’ rapping is all ugly. He has developed a reputation over the past five years as a leading poet of today’s gangsta lifestyle (“Another day in Gary,/ ‘nother couple niggas in the morgue,” he raps on “Scarface”), but a playfulness and reflective spirit pervades his starkly violent storytelling. Gibbs’s heartfelt tribute to Chicagoland’s celebrated culinary institution Harold’s Chicken Shack shows there’s more to street life than death and destruction. He spends much of the album not glorifying his rough-and-tumble past but expressing faint regret for the path that led to his success. On “Thuggin’,” Gibbs celebrates the authenticity of his rapping while bemoaning the violent realities of the street (“Motherfucka I’m thuggin’/ Selling you the science of the street rap/ Every motherfuckin’ show I do is off the meat rack/ I done been to jail and did my best not to repeat that/ I’m trying to feed my family”). On the same tune, Gibbs admits that he once sold drugs to his own family. If they didn’t get drugs from him, they would get them from some other source, and probably provide sexual favors for the score. “Broken” turns darkly existential. Gibbs begs that God would “Forgive me/ My dirty deeds was desperate/ Fuck the government/ I got my own deficit/ Death to me the only thing that’s definite/ Money rule the world,/ But when you dead,/ That shit’s irrelevant.”

Gibbs disregards the almighty dollar, but fame and financial stability has changed him. On “Deeper,” the rapper explains how his nomadic lifestyle on tour gets in the way of monogamous relationships (“I’m on the road now/ Different color hoes now/ Laid back on the dope/ I’m getting dollars off my shows now/ Bitches wanna tie me down,/ But I ain’t in that mode now.” In a clever bit of wordplay, Gibbs also characterizes the changing views of women in his life (“Girl, you used to say them other niggas wasn’t hood enough/ Got your hood degree,/ Now niggas from the hood ain’t good enough”).

Madlib’s production serves the music well for most of the album. High-pitched, rhythmic strings pepper tracks such as “Deeper” and “Shitsville.” However, if Piñata has a weakness, it is that the tracks sound a bit too similar to hold interest, especially toward the record’s center. The album’s hour-long running time feels just a few minutes too long. But guests such as Danny Brown, Raekwon, Domo Genesis and Earl Sweatshirt provide needed diversity. Despite the incongruous nature of Gibbs’ hometown, Gary is not the kind of place you want to stay forever. Piñata’s appeal is profound, yet limited. But there’s a sense of distinctive mystery at the heart of this spirited collaboration that makes it worth repeated listens.