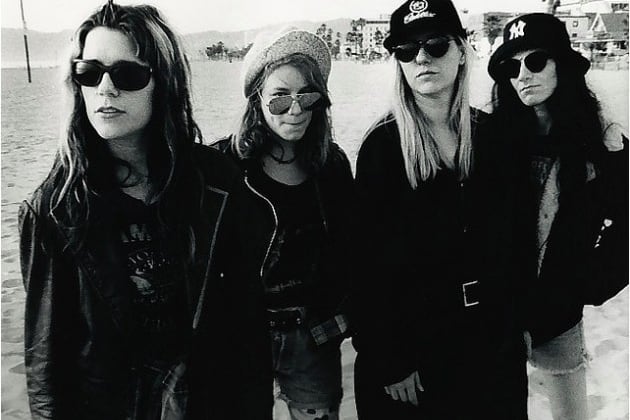 Break ups are seldom pretty or even handed. Usually, one party finds themselves blindsided, left stewing in their revenge fantasies. In this case, rather than repress it or keep it private, Alanis Morrisette was driven to share her fury, contempt and pain with a chart-topping hit, written in blood. It’s hard to talk about angry women musicians without including this song. Her lyrics are bitter, the delivery is a little insane and the end result is a blast of angsty scorn aimed at her ex and the girl that replaced her. Morrisette completely owns the ’90s grunge tone, which is the perfect delivery vehicle for her bile. – Jester Jay Goldman

2. Angel Haze – “Cleaning Out My Closet”

“Parental discretion is advised” is right. Angel Haze starts by threating to cut off God’s hands and it only gets darker from there. Haze describes being sodomized by multiple vile predators in horrifying detail. It’s not a song you can listen to on repeat. – Nathan Stevens

Anger takes many forms. It can be violent or insidious or self-destructive, but sometimes it can be a great expression of assertion. “You Don’t Own Me,” as recorded by British blue-eyed soul icon Dusty Springfield on her debut album A Girl Named Dusty, is a practically perfect example of the latter. Beginning with a simple, ominous piano line, the song (written by John Madara and David White) swiftly turns huge, buoyed by Springfield’s enormous voice and palpable aggression. It’s pop music in the mode of 1964, but all it takes is a moment of the lyrics “You don’t own me/ I’m not just one of your many toys” to hear the defiance under the smooth strings. – Nathan Kamal

Fiona Apple may be our single most emotive living songwriter, and she has never sounded more furious than on “Get Gone.” The penultimate track on her sophomore album When the Pawn… sounds melancholy from the first few notes of a piano, but it’s not a sad song. It’s a raging song, with Apple’s marvelously textured voice giving poetry to lines like “It’s time the truth was out that he don’t give/ A shit about me” and “You got away with a lot/ but I’m not turned on/ So put away that meat you’re selling.” We don’t need particulars or to even know who she’s singing about to know the raw depth of feeling that she can give even the ugliest emotions. – Nathan Kamal

“It’s…. not… yours… FUCK YOU!!!” is such a true, raw and perfect expression of feminist rage. The calm, restraint and even timidity that begins the phrase is obliterated in a hot second by Courtney’s sudden violence. Her “FUCK YOU” is so much more than anger, it’s a cannonball of grief, humiliation, rage, impatience, disgust, righteousness and – significantly – liberation. Twenty years on, it still flattens the landscape like a nuclear blast. – Stacey Pavlick

Screeching, chaotic, pummeling and murderous, “Shitlist” is an anthem of wit’s end wrath. Bare-knuckled street fighting resulting in shattered teeth and broken noses is what this tune should be a soundtrack for. And Danita Sparks’ frayed howling, which grows in demented intensity as the song goes on, is pure guttural catharsis. – Cole Waterman

“Divorce Song” is the expression of a rage that’s collapsed under its own weight and been given up on. Phair levels a fair share of her bitter resignation at her bored lover, but directs the brunt of it at her own inability to maintain a relationship. What once was love is now but obligation, and soon that too will be gone, leaving the emotionally deadened narrator with only her self-doubt and the embers from her previous passions. – Cole Waterman

Sometimes seething is scarier than screaming. In “Why’d Ya Do It,” Marianne Faithfull sneers her way from one quip to another as she berates a lover who has slighted her. “‘Why’d ya do it’, she screamed/ After all we’ve said/ ‘Every time I see your dick, I see her cunt in my bed.’” Classy and classic. – David Harris

Patti Smith styled herself as an inheritor of the Beat poets, seduced by the language and an idealistic sense of freedom. But as she imagined herself in the company of William S. Burroughs, Allen Ginsberg and Jack Kerouac, I’m sure she felt the frisson of excitement at choosing her own rebellion. Shaped by her leftist politics and performance art aesthetic, it was probably inevitable that she’d become the Godmother of punk in the form of a poet. “Rock N Roll Nigger” is all about the shock value, relying on the transgressive power of the “N” word, but it’s easy to hear her heartfelt, unrepressed rage against conformity. – Jester Jay Goldman

PJ screams and burbles and moans and bellows and quite possibly gets off on all of it. “You snake! You dog! You fake! You liar!” The drums and guitars follow simple, frantic lines as you imagine PJ’s smudge-lined eyes darting around, searching for her target. This is a diabolical rage; this is a restless fit. Someone should be terrified. – Stacey Pavlick

Scout Niblett opens last year’s It’s Up to Emma with a chilling murder ballad, a song that captures heartbreak’s painful transformation into fiery rage. Our spurned protagonist describes her partner’s betrayal slowly, with increasing fury and volume, growling out the line “Maybe you’ll be holding her hand/ Or watching her shitty band.” She sounds calm at first – maybe just hurt – but “Gun” is about her sanity gradually leeching out of open wounds, ready to reclaim control with this potent, deadly tool as red-hot vengeance fills in the gaps. Her lover won’t know where or when, but she’s coming regardless, “In a crowd someday/ You won’t see it coming anyway.” The rumbling strums of guitar sound like the increased tempo of a quickening heartbeat, exploding in the temples of an accidental killer blinded by rage. The punishing crack of the drums, coming in out of nowhere, doesn’t require subtle metaphor. This isn’t just the sound of anger, it’s the sound of an angry spark allowed to catch, unseen embers quickly engulfing the whole place before it explodes. – Michael Merline

LA punk rockers X always had a great dynamic. John Doe could do surly and desperate and Exene Cervenka was great at wounded and bitter. Where Blondie’s Debbie Harry could harness an animal bitchiness or vindictive edge, she could never summon the raw rage and petulance that Cervenka could easily tap. On this track, Cervenka takes out her whole crappy day on one particular target. The smoldering resentment has come to a head and all she can do is vent it out, leaps of logic be damned. I love the way she screams the title line, but I’m glad that I don’t have to face her down. – Jester Jay Goldman