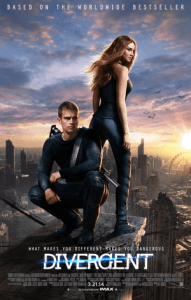 [xrr rating=3.25/5]Divergent begins with a strikingly distinctive image, but just as quickly segues into awkward storytelling. The camera tracks across a golden, bucolic field, broken by a desolate, beached cargo ship. It’s an unsettling juxtaposition, further cemented by images of a future Chicago cityscape of decayed skyscrapers. In a voiceover, protagonist Tris Pior (Shailene Woodley) breaks down the social structure of her city, separated into five Factions based on a value concept: Abnegation (selflessness), Erudite (intelligence), Candor (honesty), Amity (peacefulness) and Dauntless (bravery). Each is segregated and color-coded. 1-year-olds select their Faction on Choosing Day every year as mandated by a system adopted after a vague, long ago war ravaged the world.

Director Neil Burger isn’t at all sure that you will, given that the opening to his film is the very definition of telling instead of showing. What’s even more bewildering is that Choosing Day for Tris and her brother Caleb (Ansel Elgort) is the ideal context in which to organically explain the Faction system, bound up as it is in ritual and tradition. While Divergent is never as weak as it is in those first few moments, it’s telling that it begins with such a deliberate statement. Throughout the course of the film, significant moments are doubled up and reinforced just to make sure you don’t miss what’s going on. There are more than a few training montages, and if a character has a defining attribute, it’s going to be all that defines them.

But hey, subtle storytelling is not what Divergent is about. In many ways, it’s the opposite. Based on a young adult series of novels by Veronica Roth, Tris and her love interest/mentor Four (Theo James) exist in a world defined by bold categorization and lack of nuance. The “Divergent” are individuals within this system who cannot be categorized within one of the Factions. Tris turns out to be one of these. Why this puts her in danger is only slowly revealed.

Most of the first act takes place in the Dauntless sector of the city, after Tris defects from her home turf of Abnegation and learns to fight, shoot and bond with her fellow trainees. The second act is best left without spoilers, but the supposedly perfect Faction system appears to be on the verge of breakdown.

Here’s the thing: Divergent makes a point of underlining that Tris is unusual in that she can’t be simplified to a single trait. The subtext (which soon becomes straight up text) is that human beings can’t be reduced that way. But as a film, Divergent doesn’t back that up; most characters are reduced to a single trait, whether it’s villainous or heroic. Nearly as troubling is that the film’s antagonists are represented by the Erudite Faction. This strongly implies that intelligence is dehumanizing and malevolent, with Kate Winslet playing an emotionless segregationist (though to her credit, she pulls off a typically engaging performance for a one-note character).

Beyond the subtext and the repetition, Divergent is an entertaining watch. It doesn’t need to push the two and a third hour mark, but Burger keeps the action moving swiftly enough that it rarely feels like it drags. In the second act, the action even gets surprisingly dark, with the body count reaching a surprisingly high tally. While Roth’s dystopian society has a lot of unanswered questions (like, if it’s a new rule that Dauntless washouts become part of the Factionless underclass, why do they appear to have been around a long time?), the vision of a rotted out, partially abandoned Chicago, shot in the city, looks amazing. Due in large part to the success of The Hunger Games, sequels to Divergent are inevitable, so hopefully there will be time to iron out some wrinkles. For now, it’s solid first entry, even if the cracks show.