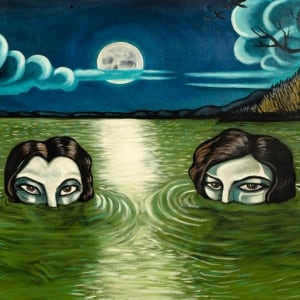 [xrr rating=3.75/5]English Oceans is the third in a series of Drive-by Truckers albums that doesn’t have a lofty conceptual bent, putting more emphasis on the small characters and American novellas the Truckers seem to craft so easily. The brash purveyors of southern rock change little about their formula from album to album, part of what makes their various arsenals of three-guitar rockers so consistent ten albums in. That steadfast approach is pretty remarkable considering the band’s ongoing lineup changes: Jason Isbell’s departure in 2007, Shonna Tucker’s exit in 2011 (it’s still hard to imagine a great Truckers album without one of Tucker’s ballads), and the passing of longtime manager and encore presence Craig Lieske this last January. English Oceans gives Mike Cooley a chance to step into the limelight, more evenly splitting songwriting duties and vocal performances with co-founder Patterson Hood, even handling vocals on Hood’s “Til He’s Dead or Rises” (a first for the two songwriters). Both frontmen released solo albums since 2011’s Go-Go Boots, and his contributions highlight just how much the Drive-By Truckers revolve around that central duo’s strengths.

Cooley’s baritone (often relegated to humorous and charming tangents in the past) serves up the real winners here, propelling English Oceans forward as a straight-up rock album. He spits out opener “Shit Shots Count” around blasts of horn and a Stones guitar groove, working in his usually grimy jokes: “Meat’s just meat and it’s all born dying/ Some is tender and some is tough/ Somebody’s gotta mop up the A1/ Somebody’s gotta mop up the blood.” Cooley is the kind of songwriter who can make the line “Idealistically speaking/ It sounds like you ain’t listening at all” an opportunity to ratchet the intensity up a few notches, mid-song. And his quieter tunes make the most of Cooley’s weary-sounding vocals. On “Primer Coat,” a lovely bar-tune about a man and his daughter, Cooley uses his plainspoken croon in true country fashion. Through a shroud of melancholy he sings memorably, “A girl as plain as a primer coat/ Leaves nothing misunderstood.” “Natural Light” frames him as an old-time warbler, jaunty honky-tonk piano waltzing around a dusty saloon melody.

Hood’s contributions don’t demand as much attention as Cooley’s, the gentler songs succeeding where a few of his more rocking songs falter. Hood’s politics come out on the finger-picked “Part of Him,” and the song’s generalized story makes it a likable complement to Cooley’s targeted rambler “Made Up English Oceans” (inspired by Lee Atwater). Hood penned stunning eight-minute closer “Grand Canyon” as a tribute to Lieske, the song’s dynamics creating an atmosphere as broad and deep as its namesake while Hood himself conveys the tragedy of loss with every cracking word. “Pauline Hawkins” chronicles a character’s need to leave an overbearing partner, and Hood covers the mid-tempo song’s somewhat common lyrical tropes with stately piano, some well placed guitar sustain and a rousing clatter as the song surges into its closing solo. “When Walter Went Crazy” portrays a mental breakdown with empathy and delicate instrumentation, and it’s the kind of song Drive-By Truckers mastered a long time ago.

While English Oceans doesn’t have the grand ambitions of the band’s 2000’s output, it does benefit from a fresh sense of focus. Earlier Drive-By Truckers albums can at times feel a bit cluttered, trying to stuff in ideas from too many songwriters – all strong, integral voices, but packed tightly into a single album and underutilized because of it. English Oceans plays off the contrast between Hood and Cooley’s styles as it switches between the two from song to song, generally making both songwriters more interesting. It replicates the approach of every Drive-By Truckers album before it while narrowing the band’s vision to that of its core partnership.