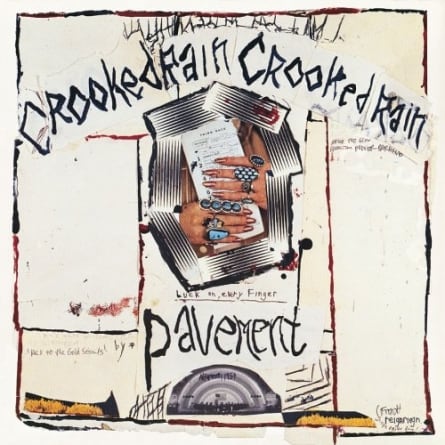 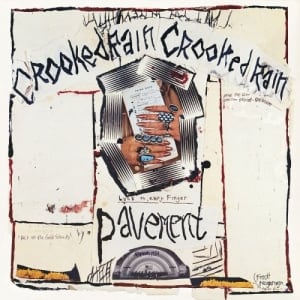 Pavement was one of those bands whose influences were totally audible, but who blasted out a sonic path in a voice that was all their own. The Fall was the obvious reference for the early records, and you can hear them go through Wire and the Byrds and even turn into Stereolab for about 30 seconds on the great Wowee Zowee. By the strength of their deadpan personality, they always sounded like Pavement. In the 20 years since Crooked Rain, Crooked Rain, these ‘90s indie rock gods have certainly given birth to leagues of imitators. But I can’t hear them in anybody’s work since. Eclecticism? Irony? Cool? All of that can be affected, none of it in exactly the way Pavement could pull off irony and sincerity, noise and a great hook at the same time. Even the Jicks don’t really sound like Pavement, despite the pedigree, Malkmus’s early musical searching having evolved into a perfectly fine and eclectic but slicker product. Pavement made it sound easy, but if you listen closer to that unflappable surface, there was a depth and emotional struggle underneath the cool indifference.

The first single off Pavement’s second album led to something new for the indie rockers: a music video. The band didn’t want to spend much money on it, and the result could not have been more low concept. Staff from the group’s former label, Drag City, came up with the idea for the “Cut Your Hair” video. Members of the band squeezed onto a couch in a real Manhattan barbershop, waiting to be relieved of their shaggy locks. Malkmus has the chair during the single’s staggering guitar solo, its epic wall of noise accompanied by the silliest of visuals. As a momentous sonic wallop rings out, Malkmus wields a plastic crown and scepter, playing King. But then a close-up: while the guitar furiously chimes, a single tear runs down his face.

This bittersweet mixture of irony and melancholy sums up the personality of one of the great bands of the ‘90s. Led by Malkmus’s deadpan vocals and cryptic lyrics – was that “career” or “Korea”? – they were poster boys for irony. But that music video teardrop was a perfect disguise. Malkmus recently told Stereogum, on the occasion of Crooked Rain, Crooked Rain‘s 20th anniversary, “[I was] kind of feeling a little absurd that we got that much attention. Or just fear — fear of success. Or just fear.”

Crooked Rain, Crooked Rain came at a transitional point for Pavement and for indie rock. The band had recently let go of original drummer Gary Young, who gave the band’s early records a wild, loose energy but became increasingly unreliable. DIYers got caught up in bidding wars with major labels, which promised better distribution and, more importantly lost indie cred. Matador Records had just worked out a joint-venture deal with Atlantic, a union met with skepticism by those who thought the music should be above commercial interests.

Around this time, Lollapalooza drew bigger crowds and more obnoxious frat boys. A summer gig on the festival’s main stage in West Virginia was a bad sign. That spring, the band had just released Wowee Zowee, an album even mellower than Crooked Rain, Crooked Rain. Plastic desert decor was scattered around the band members on stage in a show of ersatz Americana, and maybe that’s not what fans were expecting. A few songs in, rowdy fans pelted the band members with mud collected from a rain-soaked racetrack. To be fair, they would have pelted anybody. I was behind the same obnoxious frat boys at two successive Lollapaloozas, and watched helplessly as they assaulted whoever was on stage with water bottles and reached out to grab Courtney Love as she crowd surfed face down. It was the kind of thing indie rock fans had to learn to deal with in the ‘90s. When you imagine what it was like to be in a band at that time, you know what Malkmus was afraid of. As talented as they were, as exuberant as they could be in the studio or in a small venue, the arena beckoned ominously.

Pavement’s answer to the threat of success? Soft rock. Malkmus explained, “I really wanted to put it more in people’s faces that the soft rock ’70s sound could be mined and played off.” After all, what does Crooked Rain, Crooked Rain open with? More cowbell.

“Silence Kit” announces the album’s conflicted relationship with the past. “Don’t listen to your grandfather’s advice,” indeed, but the generation gap wasn’t always a bad thing, especially if your elders had a pretty good record collection. Pavement’s lyrics, like R.E.M.’s before them, sounded like catchy nonsense, but this wasn’t a lack of meaning but fragmented meaning, from a band whose ironic distance may have been an act all along. “Cut Your Hair” sounds like satire, starting with the vocal hook that Malkmus insisted upon despite objections from the band. But if Malkmus meant to send up the concept of fandom and the radio-friendly single, he ended up with one of the great rock singles, its music so exciting it talks itself out of its own snark. “But I don’t care, I care, I really don’t care/
Did you see the drummer’s hair? It’s the anxiety dream of a guy with rock star dreams afraid that fans won’t even care that he can write songs as long as he looks good. Whether he’s singing “career” or “Korea,” he’s singing about conflict.

Crooked Rain, Crooked Rain disappointed fans of Slanted and Enchanted who wanted their boys to justshred, but the vision of success that “Cut Your Hair” imagined never panned out. Before breaking up in 2000, the band released three more essential albums, and enough non-album sides to easily fill the deluxe CD editions that appeared years after their release. Malkmus went on to write perfectly catchy songs for a serviceable solo career, but his releases no longer inspire the anticipation that a new Pavement record did in the ‘90s. The band reunited in 2010 to coincide with a career-spanning greatest hits collection, but there was to be no new Pavement material.

Twenty years ago it was too cool to hear it, but now it’s obvious: Pavement did care. When I was writing this piece I played Wire and James “Blood” Ulmer albums looking for sonic inspiration. Finally, it clicked into place: Runt, Todd Rundgren’s first solo album, a pop tour-de-force from a long-faced lanky romantic. Not unlike Stephen Malkmus.