May 06, 2021
Home Features Oeuvre: Minnelli: On a Clear Day You Can See Forever 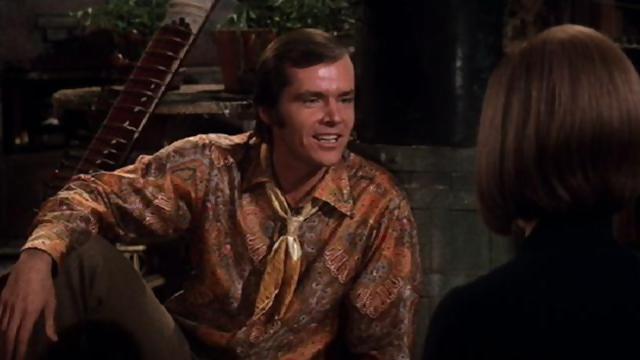 After the fiasco known as The Sandpiper (1965) came and went, stars Elizabeth Taylor and Richard Burton moved on to the sure-fire reputation-restorer Who’s Afraid of Virginia Woolf? Director Vincente Minnelli was not so lucky; MGM let their contract with him lapse without so much as a shrug. He drifted for a few years, though was still remembered as the triumphant director of 1958’s Gigi. When Barbra Streisand emerged as a cinematic force of nature strong enough to keep the romantic musical genre alive long past its sell-by date, it must have seemed inevitable that she and Minnelli would eventually work together.

Thus On a Clear Day You Can See Forever was born, featuring the thoroughly modern Daisy Gamble (Streisand) as a vibrant 20-something who attends random courses in a host of schools all over New York City. But as we learn in the opening musical number, Daisy has a strange gift: She can make flowers grow quickly. Her world is overflowing with the bright pop of daffodils and roses, as the spectacular time-lapse photography of the intro can attest. It’s another of Minnelli’s fabulous opening sequences, unique both in technical achievement and because of its then-unheard-of use of a teaser open, Minnelli deftly proving that the cold open could be much more than an attention grab.

Equally stunning are the flashbacks to the Regency era of the early 1800s, with Streisand gorgeous in beaded gowns by the incomparable Cecil Beaton. On a Clear Day is wild with color and style, and Streisand, in her third film, had finally gained the experience and confidence she needed to create a truly memorable performance.

Daisy Gamble attends a psychology course taught by Dr. Marc Chabot (Yves Montand), who on this day is demonstrating hypnosis, and sounding a lot more like Bela Lugosi than anyone involved in the film surely intended. As he hypnotizes a student at the front of the room, Daisy also goes under, proving to be an easy subject and of interest to Dr. Chabot; later, she returns to ask him for help with her smoking addiction. Chabot has by this time pegged Daisy as a con artist, thus he has no qualms about violating her rights, telling her he’ll help her only to ask other questions under hypnosis instead. When her answers hint at something unusual, he digs deeper, uncovering what seems to be an even bigger scam: Daisy claiming to be the reincarnation of a sophisticated, sexy socialite named Melinda who lived in London in the early 1800s.

After multiple sessions where Chabot induces hypnotic regression on Daisy without her permission, as well as some research and a little soul-searching, Chabot comes to believe Daisy’s tales, and falls in love with Melinda; Chabot’s contempt for Daisy, however, remains. He believes Daisy to be unintelligent and without substance and, apparently, undeserving of basic respect. When a colleague suggests Chabot hypnotize her telepathically, controlling her at whim from a distance and not just when she comes to his office, he balks momentarily, and only because he believes he can’t do it, not that he shouldn’t.

Montand plays Chabot with a strange demeanor, as though he were no longer able to experience a positive emotion, even toward that which he ostensibly desires. On one level, the character of Chabot is a stand-in for Vincente Minnelli, a man who manipulates for a living, whose ego overrides everyone else’s agency, whose needs are considered a priority by default. If Chabot often yawns his way through events that should be a fantastic boost to both his psyche and his career, he’s partly doing so on behalf of Minnelli who, consciously or not, was approaching films at this point with weary familiarity.

But Chabot’s contempt for Daisy mirrors Montand’s dislike of his co-star a little too well. After the film was released, Montand claimed Streisand had his scenes whittled down in the editing room to soothe her own ego. It was a claim Minnelli vehemently denied; he was responsible for the final cut, and it was not Streisand but Paramount, realizing that the planned three-hour roadshow format was hopelessly out of date by 1970, who insisted an hour of footage be removed. 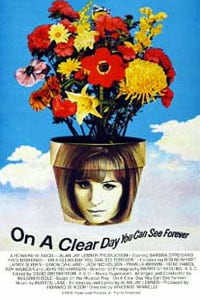 It was unreasonably common for Minnelli films to be so intertwined with real life that it became difficult to know where reality ended and fantasy began. Sadly, in On a Clear Day, this blurring of lines manifests in Chabot’s unwarranted contempt for Daisy, which mixes a little too easily with Montand’s post-production complaints. Additionally, Streisand was becoming famous for the viciousness of attacks launched against her from people like Walter Matthau and critic John Simon, both of whom essentially said, among other things, that the actress was an impostor and a phony. That Chabot approaches Daisy as exactly that — a con artist without any merit or achievement of her own — becomes an uncomfortable irony throughout the film.

On a Clear Day is a late-era Hollywood musical that is beautiful and lavish and far too self-aware. Paramount, desperate to keep the musical romantic comedy alive, thought Alan Jay Lerner’s Broadway play would be perfect to bridge the generational gap and refresh the genre. But trying to draw in younger audiences with a musical, no matter how hip Paramount tried to make it, was a lost cause. It’s to the film’s credit that hippies aren’t seen as a problem to be solved or a fad to be exploited, nor treated like bizarre curiosities as the free spirits of The Sandpiper were. Yet Hollywood was still clueless, which is why the film co-stars Jack Nicholson as the most clean-cut, short-haired, business-minded hippie who ever lived, and why advertising featured a dippy poster that attempts, and fails, to make a clever “pot head” pun.

Obviously attempting to court both late-60s youth culture and older audiences with a musical that was half urban romantic comedy, half glamorous period pieces, On a Clear Day ultimately turned off both demographics, especially in a year where films like M*A*S*H and Five Easy Pieces were released. But much of the problem was Paramount’s slash-and-burn editing style, which discarded a series of necessary musical numbers and flashbacks set in the Regency era. The result is a terrible tonal inconsistency, a first act entirely without musical numbers and a final act with no true resolution to the Melinda story line.

Meanwhile, Daisy’s mod fashions were already out of date by the time filming began. Perhaps there was some unconscious fatalism at work, the filmmakers knowing the heavily-costumed musical had been out of style for years. Streisand looks adorable in her matching outfits, but she’s dressed like a guest star in the first season of “That Girl,” while dozens of college student extras behind her look like they’ve been bussed in from Harold and Maude or Shaft. And some of these background players steal scenes, either through awkward staging or because takes don’t match, a problem in Minnelli films that is hardly unique to On a Clear Day. For a man so obsessed with set design, his insistence on using people as props in the background, forgetting that they have mobility and free will in a way a lovely vase does not, is confounding.

As with the “melodramatic excess” of Sandpiper, On a Clear Day with its outsized fantasy musical setting should have been a perfect fit for Minnelli. It was a much better fit than his previous film, a far more joyous experience, but still exhibiting a curious restraint throughout; for every successful moment in the film, there is a failure, preventing the film from being fully realized. The long takes are amazing, but in a film based on a play such as this one, long takes look stagey, not spectacular. Streisand is perfect in the role, one of the few who has been able to successfully transition from stage to a solid screen actress. Of note is her astonishing British accent, so good that Vincent Canby noted at the time that he searched for signs that she was dubbed. But she clearly isn’t, as the sub-par lip synching in the musical scenes can attest. Streisand’s soaring voice, however, doesn’t mesh in the least with Montand’s old-fashioned European crooning, so incongruous with the rest of the film that it never fails to induce laughter.

Daisy falls for Chabot early on, when she’s completely unaware of the hypnotic regression or existence of her past life. Alan Jay Lerner had intended the character to never learn of Chabot’s experiments on her, but even Minnelli felt that was taking the abuse angle of the story line too far and insisted Daisy discover the deception. Minnelli, however, was no progressive. The framing of these hypnotism sessions leaves Daisy quite literally prone, physically vulnerable to a man who doesn’t give a second thought to professional ethics or a person’s rights. There is a moment where Chabot has put Daisy under and sees in front of him Melinda, as though he were looking straight back to 1814, Daisy acting as a medium between them. But Daisy disappears under the double exposure effects, her existence completely erased in favor of the sexually voracious past version of herself. It’s not just about what Chabot wants at that moment, but what society, and especially Hollywood, preferred to see.

This culminates in an interesting yet decidedly discordant note at the finale when Daisy, partially informed of what has been going on, makes an obvious choice to disassociate with Chabot. He’s the one who has been living a fantasy life, not Daisy, who was unconscious the entire time, even during the final session when she reveals a future to Chabot that forces him to accept that he is powerless in the face of fate. Daisy, ostensibly unaware of this future, says goodbye to the man she once loved, and without regret. But when she leaves, her parting words are a zippy one-liner that can be taken as a sign she was never as uninformed as Chabot had intended her to be. The power dynamic between them has changed, and it has little to do with the usual romance clichés; it’s about Daisy always having had more control over her life than either Chabot or fate intended.

Jim Cook noted in Movie Magazine in 1977 that On a Clear Day You Can See Forever was very much like Daisy herself, stuck unaware in the past with her current life postponed until the future arrives. To extend this reading further, one could see the half-hearted happy ending, typical of Minnelli, as his commentary on the future of the romantic musical comedy, or perhaps even on his own future in films. He surely saw Streisand as a particularly keen personification of his brand of cautious artistic optimism.

Just as the film drops the narrative ball by failing to resolve the story line of Daisy’s past life, On a Clear Day failed to resolve the question: Where does the musical go from here? In retrospect, it could possibly be seen as a stepping stone on the way to the edgier musical fare of the 1970s, such as Willy Wonka and the Chocolate Factory (1971) or Phantom of the Paradise (1974). In truth, the film just sits, mostly unnoticed, on various cinematic lists with titles like “Vincente Minnelli films” or “1970s Musicals.” With its few moments of brilliance hidden so well amongst heaps of good-natured mediocrity, On a Clear Day You Can See Forever will never be seen as anything more than a curio, the penultimate film of one of Hollywood’s most complicated directors.