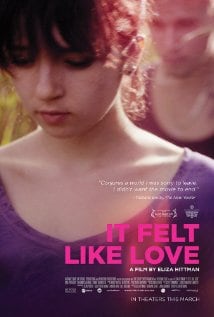 [xrr rating=4.0/5]Evoking the moods of summertime and an age when self-definition took on the most crucial of airs, It Felt Like Love is a bittersweet testament to the immediacy of adolescence, the age when our sense of self-worth and sexual proclivity are most intertwined. So it goes for Lila (Gina Piersanti), a shy and exceedingly insecure 14-year-old whose conception of sex, in all its mystery, intrigue and otherworldliness is represented in the film’s ethereal cinematography. Prolonged tracking shots and sensual close-ups of just about every body part possible—particular attention is paid to torsos, shoulders, the smalls of backs, neck lines, and bent knees—give the film an almost voyeuristic feel, but director Eliza Hittman, making her debut feature, anchors the material in a sense of wonderment, transporting us back to a more innocent and indeed more impressionable age.

Hanging around the beach and traipsing about her blue collar Brooklyn neighborhood, Lila meticulously observes the way her slightly older gal pal Chiara (Giovanna Salimeni) interacts with her boyfriend, Patrick (Jesse Cordasco), everything from the way they kiss to the way they touch to the way they speak to one another. Utilizing their behavior to fuel her uncertain (read: virginal) sexual identity, and without a parental presence (specifically a motherly presence—her mom is dead and her father is either ignorant or indifferent, a key wrinkle in the film’s feminist outlook) to guide her, Lila arbitrarily hitches her wagon to Sammy (Ronen Rubenstein), a weed-dealing college student who entertains Lila’s advances for a spell only to reveal himself a chauvinist and just a tad bit malicious.

Recalling work by Claire Denis and Catherine Breillat, It Felt Like Love unwinds at a leisurely pace, perfectly matching the lazy afternoons of a Brooklyn summer in which it frequently takes place. This laidback approach is transported to the central story, whose low stakes plotting belies the intense personal battle waged within Lila. Quite often, Hittman opts for visual references and aesthetic cues in lieu of dialogue, a method aided by Sean Porter’s exquisite cinematography. Smartly taking advantage of the warm summer sun, Porter photographs the mostly teenage cast with rapturous intimacy; the soft lighting gives their bodies an almost heavenly sheen, no doubt a byproduct of the characters’ fixation on one another. Hittman so remarkably and diligently communicates the inner lives of the characters via her camera that when she (seemingly begrudgingly) resorts to conventional dialogue scenes, the film sort of comes off the rails: in one scene, following a particularly eventful day spent with Chiara and Patrick, Lila is in front of a mirror struggling with the straps of a dress (borrowed from her mother’s closet) when one of the two nameless adult female characters in the film knowingly quips, “You need some help, dear? You look like you’re coming apart.”

Unfortunate missteps like these are few and far between, however. It Felt Like Love joins Tim Sutton’s Pavilion in the genre of recent American indies that explore adolescence without resorting to trivialization or melodrama. Hittman approaches Lila from a place of love and compassion first and foremost (somewhat at the expense of the other characters, particularly the father and Chiara, who are disquietingly villainized and slut-shamed, respectively), painting her missteps as requisite bumps in the rocky path to adulthood while avoiding the hokey hysterics that plague so many coming-of-age films. There are no gigantic bursts of emotion in It Felt Like Love, no far-fetched revelations or convenient come-to-Jesus moments, just the confusion, tension and panic of a difficult age, experiences that corrode one’s innocence but don’t leave one any wiser for it. Even when the film seems to teeter toward histrionics, Hittman (and, by proxy, Piersanti) maintains her poker face, allowing restraint and ambiguity to dictate the moment, leaving us in a sort of suspended state not unlike the kind seen on screen.