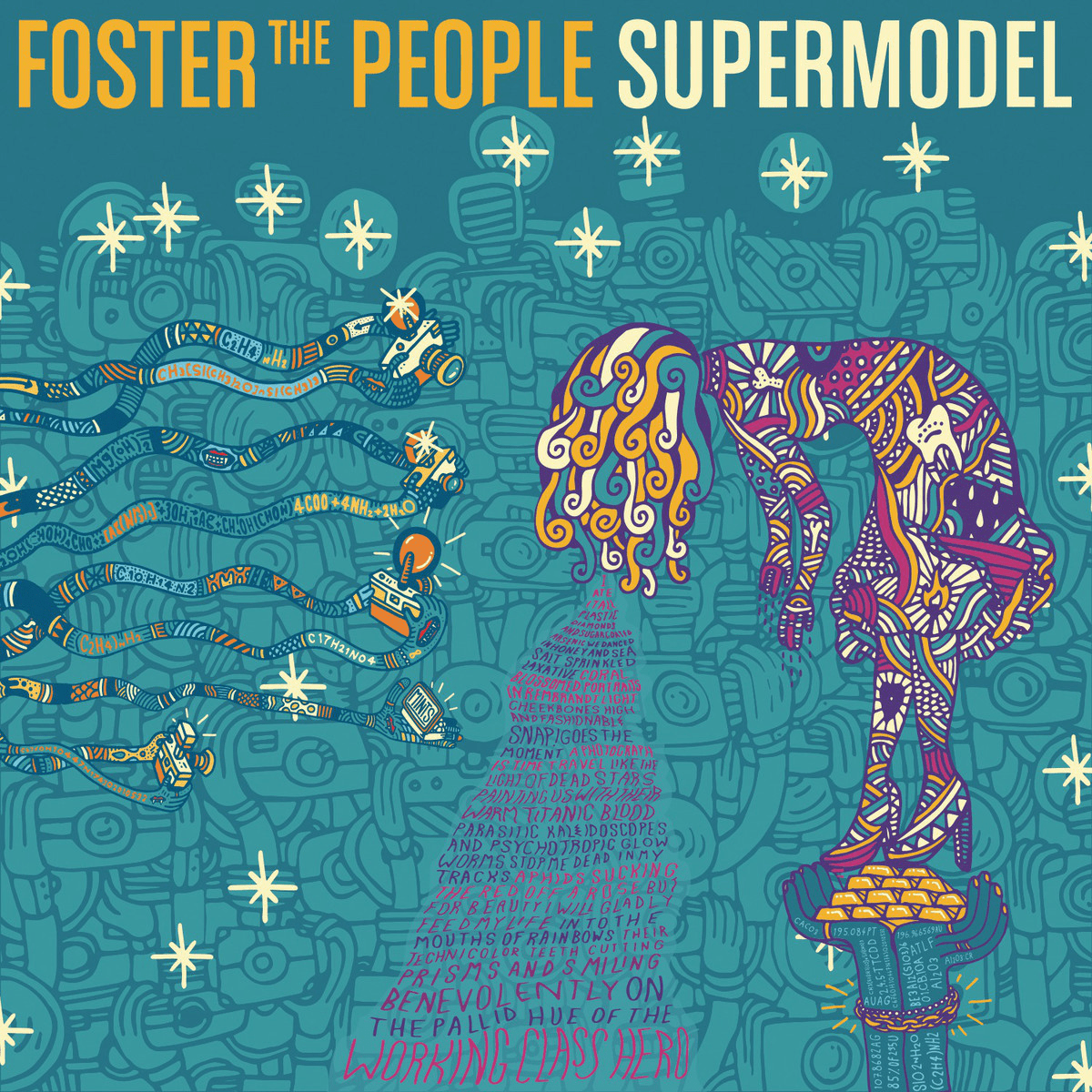 [xrr rating=2.5/5]The wild success that Foster the People experienced with Torches was impossible to predict and, it seems, impossible to replicate. That success was due entirely to their ubiquitous single, “Pumped Up Kicks,” but far from being a one-hit-wonder, the band’s singles “Helena Beat” and “Don’t Stop (Color on the Walls)” also fared well on the Billboard charts. This kind of sleeper hit debut album would put a lot of pressure on any band, and it’s no surprise that their sophomore effort, Supermodel, has been so highly anticipated with feelings of both excitement and uncertainty. This is the album that will prove whether or not the appeal of Torches was a happy accident or the foundation of a pop career.

Upfront, lead singer Mark Foster has stated that Supermodel is a very different album than their debut. Foster has described it as more orchestral, organic and somewhat conceptual. The emphasis on the orchestral on the album can be easily attributed to Foster’s work on the score for the film Little Boy in 2013. And the attempt to shift away from electronics and synthesizers can be felt throughout the album. There is a sense that Supermodel is uncharacteristic for Foster the People, yet at the same time, it is certainly the same band only slightly evolving their sound and opening themselves up to influences from punk rock to West African beats. The overall impression Supermodel makes is of a guitar-driven album that dwells on the impact of consumerism and pop culture – from the perspective of a band that has experienced it in person.

The first single, “Coming of Age,” is the best offering on Supermodel. It stays true to Foster’s Torches formula and draws on ‘80s influences to good effect. The track is truly representative of the album as a whole – it has a catchy melody and chorus, strong guitar riffs and the bane of pop music, handclaps. Above all, it is a simple, inoffensive song that has wide appeal. In the same vein, album opener “Are You What You Want to Be?” builds slowly into a brazen rock and West African mash-up that reflects the band’s globetrotting experience becoming overnight stars. It is hard to ignore the fact that this stylistic blend imitates the modern alt pop and African hybrid that bands like Vampire Weekend have been peddling for years now.

Foster the People come off as more original and more evolved as a band on tracks like “Ask Yourself,” “Nevermind” and “Best Friend.” Foster grapples with his unforeseen success throughout this album but never more directly on “Ask Yourself,” a song that sees him ask “Who says the dreamers always get what they want?” while defensively singing “Ambition’s not a crime” in the same breath. This theme continues into “Nevermind,” a song very reminiscent of early ‘90s alt rock. The existential backdrop to the album does start to wear thin once the psychedelic-influenced “Pseudologia Fantastica” begins. “Best Friend” sees the band revisit the most intriguing aspect of “Pumped Up Kicks” – the disconnect between dark lyrics and upbeat musical arrangement. The lyrics are all about drug addicted friends but are entirely forgotten against the backdrop of a funky dance beat.

Supermodel is ultimately a radio-listenable disappointment – not a disaster but nowhere near the ingenuity of Torches. And its main flaw is Foster’s references to a multitude of different musical styles without actually bringing anything particularly new or engaging to any of them. The result is a choppy album with very little flow. From one song to the next, the band can sound like acoustic indie darlings, ‘80s rockers and even grungy ‘90s garage bands. And that leaves the listener unable to pinpoint and associate a distinguishing sound with Foster the People.