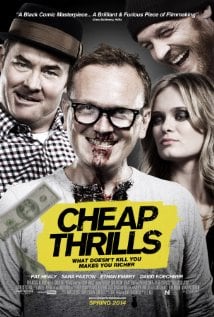 [xrr rating=3.75/5]Craig Daniels (Pat Healy) tucks in his shirt and buckles his belt. He has just done something disgusting, but needs to maintain a fragile veneer of dignity and order. He will not feel that way by the end of Cheap Thrills. Director E.L. Katz’s feature debut comes on as if the Hangover movies were exercises in psychological degradation, which they were. The black comedy that this movie’s ad campaign promises does not quite pan out. What does happen, in the guise of a domestic horror movie, is a cynical indictment of a society in which ordinary men commit desperate acts in order to make ends meet. It’s not funny because it’s true.

Craig is having a bad day. The cries of his fifteen-month old son interrupt a tender moment with his wife. He finds an eviction notice on his front door. He loses his job as an auto mechanic. Desperate and emasculated, Craig needs a drink, and he runs into old classmate Vince (Ethan Embry) at a dive bar. Vince is as uninhibited and reckless as Craig is withdrawn and cautious, but the anxiety of a personality clash pales next to the anxiety of man who can no longer provide for his family. As if on cue, wealthy couple Colin and Violet (David Koechner and Sara Paxton) approach the pair and want to hang out.

“So what do you guys do, work at a car wash?” Colin’s question introduces the class divide at the heart of the movie. The rich wolf recognizes a pair of working class sheep who would do anything for money.

The script by David Chirchirrilo and Trent Haaga borrows elements from Michael Haneke’s Funny Games, Fellini Satyricon and David Fincher’s The Game. But a more recent movie provides an instructive counterpoint. In the 2012 thriller Compliance, Healy played a character named Daniels who impersonates a police officer. In Cheap Thrills, this Daniels doesn’t give orders, but takes them.

Cheap Thrills may be the B-movie side to Compliance, but it’s a more effective movie despite a flawed script. Colin states the obvious when he compares the evening’s degradations to reality television, except that this is “real.” It’s a heavy-handed remark that, in Compliance, would have been played as a big Dramatic Moment. Koechner reads it casually, deflating the high-minded sentiment with a chilling shrug.

You don’t expect strong acting in a horror movie, but Katz gets strong performances from his cast, setting the tone for a grisly chamber piece in the film’s main set, Colin and Violet’s hip condominium. Healy is a hardworking character actor, and his performance here proves he can carry the right film. His ordinary features and slight build make him an anxious Everyman, his worries your worries, his deterioration over the course of the film that much more believable because you recognize his desperation. David Koechner is likewise an ordinary Joe, his features a demonic counterpart to the hapless Craig. When Craig ducks his head and clenches his jaw, it’s out of passivity and nervousness; when Colin clenches his jaw, it’s because he’s hiding something. Sara Paxton’s vapid wife is an empty plot device, but the primary male characters are all people you know.

Katz’s previous directorial credit was a segment in the horror anthology The ABCs of Death 2. His visual style is cramped and dismal, but the shaky handheld camera is not so bad that it distracts from the actors, providing just enough imbalance to mimic the discomfort on screen. Cheap Thrills recalls a line Noah Cross (John Huston) tells Jake Gittes in Chinatown: “most people never have to face the fact that at the right time and the right place, they’re capable of ANYTHING.” The movie is a chilling, sadistic look at what one person finds he’s capable of—when he needs the cash.