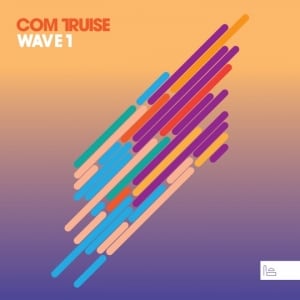 [xrr rating=2.75/5]Listening to Com Truise incites the same type of response as watching those 1960s documentaries about “The World of Tomorrow.” Looking back from 2014, it is absurd to think that prop teams from five-plus decades ago really thought that we would have self-driving cars, robotic nannies and self-toasting toasters in every home and garage across the United States by the turn of the new millennium. However, it is still pretty awesome to examine the color patterns and industrial designs of technology that are still decades from coming to fruition – if they ever do at all. During the interim generations, American pop culture has developed an insatiable appetite for all things retro, which could very well be slowing our own cultural evolution. It is that sense of retro-futurism that has fueled the career of New Jersey-bred Com Truise (née Seth Haley). During the 7-track EP Wave 1, Com Truise (the world’s first synthetic/robotic astronaut) pushes further into the neon lights and warped sounds that he first encountered during 2011’s Galactic Melt.

Coming off nearly a full two year hiatus, Haley’s productions have concurrently grown lighter and denser. Opposed to the darkwave chase that could be heard in 2011’s “VHS Sex” and 2012’s “Dreambender”, Wave 1 exists in an ethereal plane overlooking that earlier chaos. The slowing building bass-wake remains, but aside from “Valis Called (Control)” Haley’s signature analog synth strikes are now hitting at a higher register. Instead of cautiously treading through these new foreign lands, Com Truise is equipped with a fully charged jet back and is challenging you to follow him through falling stars and chunks of space dust.

As the instrumentals have become less sparse, a new focus on melody begins to take shape. Early EP cuts “Wasat” and “Mind” are a practice in coalescence; taking a moment to take shape and then defying one another’s difference until they too find their peaceful plane of existence. “Declination” (feat. Joel Ford) is likely the most melodic track in the Com Truise discography; commencing with spine-tingling sci-fi dissonance and then transforming into easily digestible 1980s new wave.

These richer melodies create more direct connections between Haley and other electro-provocateurs. For fans of STS9, the bridge between “Subsonic” and ““Valis Called (Control)” listens like it was pulled directly from live set. And the title track, which also closes the album, has unmistakable similarities with the work of Jamie XX (of the XX fame). Not implying that the tracks aren’t 100% Haley’s, but that he is losing some of his inventive edge as he attempts to recycle the same vibes from the last half-decade.

Wave 1 is charming, just like the Robot in “Lost In Space.” Nonetheless, by 2014 have we not found the right time for actual invention and not continued re-invention for the sake of nostalgia?