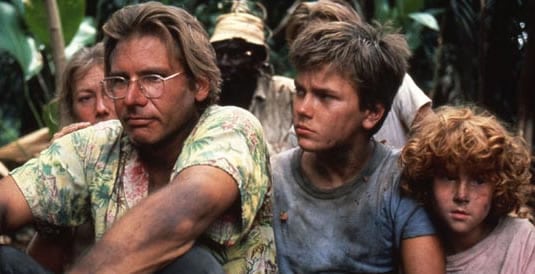 With a terrific cast headed by Harrison Ford, the biggest movie star of the day, and a hell of a pedigree— including screenwriter Paul Schrader, a frequent collaborator with Martin Scorsese, as well as director Peter Weir and producer Jerome Hellman—The Mosquito Coast must have seemed a surefire hit during the holiday movie season. But critics were lukewarm to the film and audiences, as they say, stayed away in droves. The film lost millions.

Allie Fox (Harrison Ford) is an inventor and man whose entire belief system is predicated on his absolute certainty that he is a superior human being, smarter and more clever than anyone else. He’s a crackpot and a boor, though his early rants are somewhat standard at first; his complaints about welfare, distrust of immigrants and refusal to buy products from Japan mark him as a typical mid-‘80s conservative and little more. When his ego is bruised after being scolded, he searches for someone lower on the sociocultural pecking order to pick on, and he finds it in the ramshackle home of migrant laborers. Barging into the empty home without permission, his emotions are a swirl of wounded pride coupled with an uncomfortable mix of scientific intelligence and social ignorance.

It’s in this moment that Allie Fox reinvents himself as a modern day Great White Hope, the man who will take the few bits and pieces of the American Dream he still believes in to the jungles of Central America, along with his newest invention (a method of creating ice), and create a utopia of his own design. Dragging his beautiful wife (Helen Mirren), known only as “Mother,” and his four children along— including his eldest son Charlie (River Phoenix), who occasionally narrates the tale—Allie leads the way to Honduras and ends up buying the tiny jungle village of Geronimo.

In his bright Hawaiian shirt, indicative of the same uniquely American flavor of rebellion and individualism exhibited by characters such as H.I. McDunnough or Tony Montana, Allie slashes and burns and orders the indigenous people around. Throughout, he is unaware that their strange acquiescence is probably less a product of his self-styled godhood and more a product of the influence of Reverend Spellgood (Andre Gregory), local missionary. Both men have clearly decided that it’s better to rule in Hell than serve in Heaven, thus Reverend Spellgood brings God and white picket fences and satellite television to Geronimo, while Allie Fox brings ice. 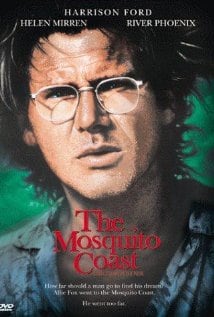 There is an audacious genius behind casting genial, hunky superstar Harrison Ford in the role of a man who may be brilliant but who has almost no redeeming qualities. And The Mosquito Coast wants you to remember exactly who Ford is, too, including plenty of close-ups on that handsome face and even a blatant Indiana Jones reference. Though critics were quick to praise Ford for his performance, audiences simply did not want to see that crooked, boyish smile on a sociopathic crackpot. Equally disconcerting for moviegoers was seeing Ford’s movie-star looks and sex appeal applied to a man like Allie Fox, though that too made a singular kind of sense; what else could explain why anyone put up with him?

It’s almost insidious the way Ford’s appearance and reputation affects audiences the same way a real-life Allie Fox would have affected those around him. When he makes fun of the people who say, “Have a nice day!” without meaning it, the nuance, as always, is lost on him. Allie never realizes that these phrases have a place in civil society, instead believing himself to be a better person because he doesn’t bother with these social niceties. Because this particular point of hostility is directed at the insufferable Reverend Spellgood, the audience is on Allie’s side too, easily excusing his arrogant sneers as justified, and easily forgetting that it’s the people who don’t even pretend to be civil that you have to watch out for.

Allie’s solution for every problem, irritation and snag is to dismantle it all and start again. Though he claims to love America too much to stick around and watch the country destroy itself, in truth he’s just angry that he isn’t the agent of destruction. But Allie is no mere nihilist or metaphorical agent of Satan. Rather, he’s an active challenger to the throne, styling himself as the ruler of a Hell made of ice rather than fire.

When fire inevitably and spectacularly wins out, Allie simply appropriates the destruction as though it was his own idea and decides to start over again. This time he tells the family that America has been destroyed by nuclear war, a lie that speaks far more to his deep desire for international power than it does as a means of controlling his increasingly antagonistic family. His new scheme is, of course, even more foolish than his previous plan; like the Dr. Frankenstein he jokingly compares himself to, he doesn’t know when he’s been licked.

The moment that the reality of this man’s megalomania hints at a frightening and infinite series of tragedies must have been when 1986 audiences completely checked out. No one wanted to imagine an infinity that included Allie Fox, let alone an Allie Fox who was the unquestionable product of the American society they lived in. Screenwriter Schrader and director Weir stripped much of the satire from the original novel, resulting in a film as overcome by one man’s performance as the Fox family and people of Geronimo were overcome by Allie. The sparse script left behind a raw tale of American arrogance that was far too difficult for audiences to digest. Having undergone a certain amount of reconsideration over the years, The Mosquito Coast’s reputation has undoubtedly benefited from time and distance.