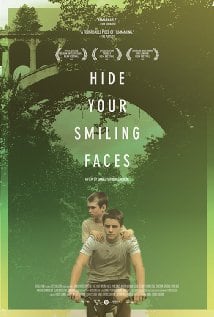 [xrr rating=3.75/5]Amidst the lush green of a rural New Jersey summer, preoccupation with death is a well-established fact of life, even long before a local is found dead underneath the town’s abandoned train trestle. Though the bridge is dangerous, there’s an immediate assumption of suicide, no one seriously considering the death to be an accident. As a young girl speaks about the recently deceased, she doesn’t say he had been nice to her, but rather he had never been mean to her, a notable distinction that hints at just how miserable a place this town is to live in.

Hide Your Smiling Faces follows teenaged Eric (Nathan Varnson), his brother Tommy (Ryan Jones) and their friends as they spend lazy summer days playing with animal corpses, picking at scabs and messing around with bugs that look to contain interesting and varied poisons. They are also members in good standing of what by all rights should be called Fisher-Price’s My First Fight Club, staging fist fights with each other, messing around with guns and playing on the same bridge that has claimed at least one life; they seem so determined to create another tragedy they must consider it inevitable.

With remarkable performances from both Varnson and Jones, the tone is subtle and poignant, at least at first. But the constant threats and reminders of mortality soon become a laundry list of life-is-cheap tropes, resulting in an emotional exhaustion for the audience that segues nicely into a deep, unflinching boredom. But the boys are bogged down and bored, too, what with being the only people in town without a hint of responsibility. Everyone else, even other teens, are working to serve them, and we frequently see Eric’s parents in the background mowing lawns and bringing in groceries and dishing out his food for him. He’s got the luxury of an entire summer to soak in his ennui.

Though ostensibly about the internal struggle of young teens to process something they’re ill-equipped to understand, Hide Your Smiling Faces is mostly structured as a typical bildungsroman, a series of events that escalate to a sharp finale. There is a careful mix of burgeoning sexuality combined with the violence that provides an interesting thread in an otherwise very loose, episodic narrative. Their sexual curiosity is dealt with in a touching way in Tommy’s story arc, but turned into a troubling bit of homophobia in Eric’s. That isn’t much of a surprise, however. Early on Eric is revealed to be so unprepared for life that he faces these immediate questions of death, sexuality and responsibility by apparently refusing to believe that adulthood even exists.

Yet a majority of the episodes in Hide Your Smiling Faces are not the usual coming-of-age incidents, but rather situations that would seem to require legal and psychological professionals to intervene, and quickly. Bringing a gun into the narrative mix adds a whole heap of sociocultural baggage that the film doesn’t want to deal with, and perhaps firearms were only added to Hide Your Smiling Faces to meet that requisite edge of violence common within the genre. To that end, writer-director Daniel Patrick Carbone can’t help but invoke constant comparison with a series of other coming-of-age films, from Kes (1969) to Gummo (1997) and plenty in between, robbing the film of the one thing it so desperately needs: a truly unique voice.