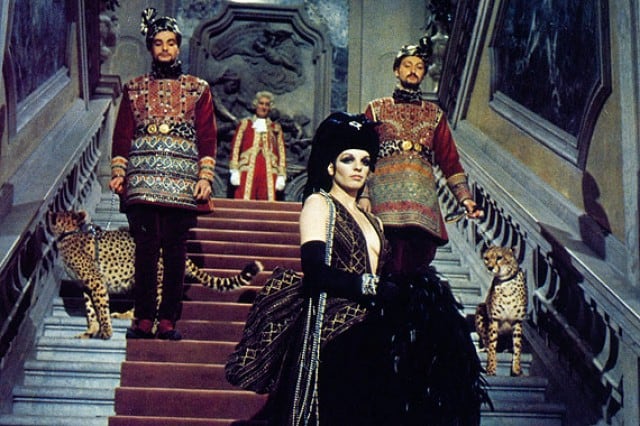 Vincente Minnelli’s final film, the stilted and ill-fated musical A Matter of Time (1976), is an homage to the bygone era of golden Hollywood and a star vehicle for his daughter Liza, whose Oscar win for Cabaret permitted her a certain amount of clout in selecting roles. With her father’s health dwindling, Liza jumped at the chance to star in one of his films, a dream the two of them had long held. The project they settled on was an adaptation of Maurice Druon’s novel La volupte d’etre, known in English as The Film as Memory, a far more suitable title than A Matter of Time. It centers on the Contessa Sanziani (Ingrid Bergman), an aged Belle Epoque courtesan whose waning social status drives her to seek asylum in a shoddy hotel. Engulfed in her memories, Sanziani recounts her former glory to a wide-eyed 19-year-old maid, Nina (Liza Minnelli), who places herself within the Contessa’s romantic stories. Newfound confidence amassed, Nina is persuaded by a movie producer to pursue a career in acting; soon, she’s catapulted to fame while her former mentor reconciles with her past.

A film about nostalgia that is itself a product of nostalgia, A Matter of Time suffered a turbulent production and was very poorly received. Minnelli hadn’t made a film since On a Clear Day You See Forever, and he had trouble raising funds. He struck an unlikely deal with Samuel Z. Arkoff and Roger Corman’s infamous American-International Pictures, the low-budget studio that specialized in cheap genre fare. Arkoff, hoping to bankroll a potential Oscar contender, supplied the project with five million dollars, but all the money in the world couldn’t save the film from a tumultuous production, which endured labor strikes by the Italian cast in addition to various script revisions handed down by Arkoff, who found Minnelli’s lavish sensibilities uncouth in the age of New Hollywood. The finished product is a structural mess, marred by inconsistent characterizations and an overall lack of narrative cohesion, but nestled among the rubble is the occasional bright spot and even a small miracle or two.

Just as Arkoff found his director unfit for Hollywood’s latest chapter, Minnelli found himself far from Arthur Freed and the cozy confines of MGM Studios, yet he threw himself into the film nonetheless. For all its (studio-induced) awkwardness, A Matter of Time is unmistakably a Minnelli film, equipped with the sort of garish genius one finds in his most towering masterworks. So few of the studio masters, from John Ford all the way down to Nicholas Ray, were allowed even a modicum of grace when their careers came to end. Many bowed out with sorry films that scarcely resembled their earlier efforts (cases in point: Jacques Tourneur and Billy Wilder). In Minnelli’s case, his star had unduly fallen, but his final work is a fine summation of his overall career, employing such familiar themes as the increased Americanization of European culture (An American in Paris), young working women in search of an identity (Bells are Ringing, The Clock), and the ideological particulars of making moves (The Bad and the Beautiful, Two Weeks in Another Town); visually, his usual kinetic aestheticism is on full display, evident in the film’s playful compositions and instinctual camerawork. He seems to have the most fun during the film’s fantastical flashbacks that place Nina in turn of the century France; here, he’s able to glide over elegant ballrooms like he did in Madam Bovary (1949) and The Reluctant Debutante (1958).

That said, when viewed with a late ‘70s lens, it’s easy to understand why audiences and critics treated A Matter of Time so poorly. A case could be made that Minnelli was misguided in his attempt to adapt a classic style in a contemporary film landscape. As Vincent Canby, noted cinema loather, wrote, “It is full of glittery costumes and spectacular props. It is performed by talented, sophisticated people who adopt faux-naif gestures of an earlier showbiz tradition, and though it is expensive, it sounds peculiarly tacky.” On the other, one could just as easily (and perhaps more accurately) argue that Minnelli was ruefully defying the customs of the age, which favored rawness and grit over the sort of orotund prestige that was Minnelli and his peers’ bread and butter. This is evident in the film via an American movie director who rambles on in his hotel room about his latest opus and waxes poetic on the most effective way to shoot a rape scene (“It’s something urgent, shocking, and it has to be forced—ugly, cruel force—but how do you transcend that!”), an obvious caricature of tortured movie brats.

Still, it’s this same director who gets Nina her job in the movies, a gesture that plays like Minnelli’s recognition that Liza was bound to a new set of showbiz standards, practices, and, ultimately, aesthetics. If A Matter of Time served to fulfill Minnelli and his daughter’s dream of working together, it equally serves as the director’s farewell to the craft. Thankfully, it doesn’t read like a eulogy, and despite some pointed ribbing, it also not a condemnation. If anything, it’s a victory lap.