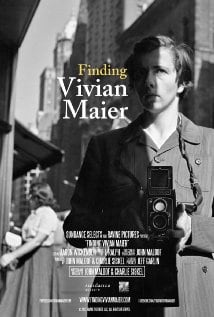 [xrr rating=4.0/5]When I reviewed the first published collection of Vivian Maier’s photographs in 2011, my editor noted what he thought was a bad typo: that a woman who worked as a nanny left behind over 100,000 photographic negatives. It seems like a high number for a professional photographer, much less someone who made photographs in her spare time, but it’s an accurate figure. What drives such an artist to toil away in obscurity?

Co-director John Maloof was researching Chicago history when he happened upon a group of negatives at an auction. The photos demonstrated a distinct vision of street photography, but when Maloof wanted to find out about the artist he drew a blank. By the time he tracked down the name Vivian Maier, it was to find her obituary. Maloof started to make Maier’s photos available on Flickr in 2007, and the photography world has eaten the story up ever since. I eagerly scarfed up that first publication of her photos, saw two New York gallery exhibits devoted to her work, and (full disclosure) contributed a small amount to the Kickstarter for this documentary project, which is now finally released. Did Maloof find out more about this mysterious photographer?

The film Finding Vivian Maier answers this with a fascinating yes. Maloof talks to families who hired Maier to take care of their children, as well as the owner of an antique shop where Maier made all kinds of random purchases. It’s not surprising that an artist who made so many photographs was a bit strange. Nor is it surprising that the director is a bit strange himself.

The story of Vivian Maier is also the story of John Maloof’s own discovery, so the film is about him as much as Maier. The filmmaker-as-subject can be a tired documentary trope, but Maloof gets to himself indirectly through Maier. His story is strange too, not just for the sheer luck by which he stumbled upon these images, but for the dedication and obsessiveness which he brought to the project. Stranger still may be the resistance he met from art institutions like the Museum of Modern Art, which declined his initial overture to exhibit the collection.

Part of the mystique of the Maier story is that she never showed her photos to anyone. But the families Maier worked for were not entirely unaware of their nanny’s shutter mania. After a boy she was taking care of was hit by a car, his parents arrived on the scene to find Maier, cold, clueless to social cues, or both, snapping pictures of the scene.

Maier’s work recalls many street photography forbears like Diane Arbus and Lisette Model, but she didn’t work in a vacuum unaware of the field. Finding Vivian Maier doesn’t address this, but at least one early news report about Maier included a brief and tantalizing shot of her bookshelves, which included a knowledgeable collection of photobooks by old masters like Berenice Abbott and Cecil Beaton, to a younger generation of photographers like German shutterbug Thomas Struth.

One of Finding Vivian Maier‘s less surprising revelations is that she was something of a hoarder. So is Maloof, in a sense. Most of the film consists of talking heads from people who knew her and well-known photographers like Joel Meyerowitz. But the documentary’s most intriguing visuals are of Maier’s belongings, which Maloof purchased along with her negatives, amassing another person’s lifetime of flotsam and jetsam in a considerably shorter amount of time. Such is the relationship of the artist and their champion. Finding Vivian Maier is not flawless, its early soundtrack cues overbearing and generic. But it’s essential viewing for anyone interested in street photography, and a great story period.