September 22, 2020
Home Music Johnny Cash: Out Among the Stars 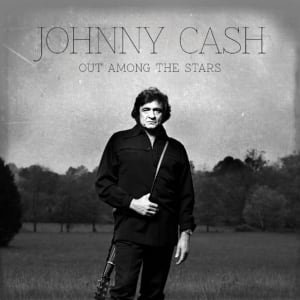 [xrr rating=3.0/5]When the clock struck 1980, Johnny Cash’s career was at a sort of crossroads. Though still a draw on the road, his records weren’t selling a whole lot, and he shook things up by reorganizing his Tennessee Three, the legendary backing band that defined his freight train sound. Bassist Marshall Grant was fired, the cast started rotating and band members grew in number at a time more and more Nashville acts tried to capture a mainstream pop sound. Producer Billy Sherrill, forefather of the countrypolitan style, was brought in for 1981’s The Baron with the clear mission of moving the needle, and even though he played along, Cash was still a little too rough around the edges for the ‘80s schlock many of his peers would churn throughout the decade. Though none of Cash’s records from this period could be considered among his finest, there are some more than respectable moments. And apparently, until recently, there were more than anyone realized.

In 1981 and 1984, bookending a rehab stint and just ahead of forming the Highwaymen, Cash continued his work with Sherrill. The result apparently wasn’t suitable to Columbia, who shelved the tapes and ultimately dropped Cash in 1986 when the register didn’t ring to their liking. The recordings lay untouched for almost two decades until being discovered in 2012 by Cash’s son, who was able to do some polishing and fill holes from the sessions with players like Marty Stuart, who was originally there. While it’s unclear how finished these tracks were, anything punched in sounds flawless and intended, and Cash’s voice is truly in top form throughout. The result is Out Among the Stars, a collection that’s certainly not as revolutionary as his final run with Rick Rubin, but stands up against, if not over, anything Cash recorded the entire decade.

With its stylistic jumps, it’s clear, and almost understandable that Columbia had no idea what to do with Out Among the Stars. Just about every signpost of Cash’s career – both what came before and after – is covered here, from references to early rockabilly (“Rock and Roll Shoes”) to mid-period ballads (“Call Your Mother,” sung as a letter to a former lover, not unlike “Give My Love to Rose”) to the emotional rawness of his American years (“She Used to Love Me a Lot”). Cash’s duets with June Carter (“Baby Ride Easy,” the phenomenal “Don’t You Think It’s Come Our Time”) both blossom with bluegrass elements, while his spiritual “I Came to Believe” would have been perfect on the Ultimate Gospel collection. Though his boyish charm shines through on the silly “If I Told You Who It Was” (“Her tire, unlike her body was very flat”),“After All” solidifies the fact that Cash’s voice carries a ¾-time waltz as well as anyone.

While Cash proved in his later years that his versatility was unmatched by anyone in the country genre, and Stars clearly displays that, fans will be ecstatic to hear traces of honky-tonk still alive. The title track starts things off in some very familiar territory as Cash’s trademark “boom-chicka-boom” bass notes ring in, even without Bob Wootton or Luther Perkins there to play them. The subject matter is vintage Cash, too, with the opening line, “It’s midnight at a liquor store in Texas” setting the stage for a robbery of necessity and serving as a prelude for one of his catchiest choruses ever. Old buddy Waylon Jennings is on board for “I’m Movin’ On,” which barrels down the tracks like Cash’s classic take on “Jackson” and features scorching roadhouse solos from Jerry Kennedy, while the traditional-sounding “Tennessee” is just waiting to be claimed by the state tourism department. These tracks might have been what Nashville was moving away from in 1984, but they sound pretty damned good in 2014.

A lot will be made of Out Among the Stars being a “lost” album and it will receive the sort of inflated praise affixed these days to many legacy artists when they release new music. It must be stated that if Stars came out today under normal circumstances, it would be perceived as a very good start-to-finish album, but not something that would make the world stop and listen. But it is a literal gift to fans, all of which will want to pause to hear Cash perform an extremely enjoyable set of songs that delivers absolutely everything they’d want from a Cash record, especially one they weren’t expecting to hear. Columbia may have demanded new fans with this effort, but Stars will remind the old ones why they loved Johnny Cash in the first place.