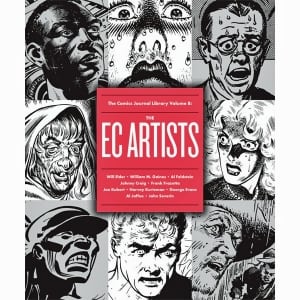 [xrr rating=3.75/5]This is a terrific book for anyone interested in the workings of the legendary EC Comics from behind the scenes. Although much of the material has been previously published elsewhere (mainly in The Comics Journal), many of these interviews are obscure or long out of print, and are a trove of gossip and insight into the machinations of history’s most notorious comics publisher. With multiple illustrations on almost every one of its 230+ oversized pages, there are hundreds of examples of classic comic art, much of it in black and white, with some examples in color. The fact that the volume is subtitled “Part 1 of 2” simply promises more to come.

This volume contains ten interviews with such luminaries as William Gaines, Al Feldstein, Joe Kubert and Harvey Kurtzman. There is even a brief, previously unpublished interview with Frank Frazetta. The conversations range from under two pages (Frazetta) to more than 50 (Will Elder). As would be expected with such a diverse group of men—and they are all men—and such lengthy interviews, the topic of conversation ranges far and wide. Of course, there is plenty of discussion about the comics industry, and of the various careers of the men involved, and the fallout of the disastrous 1950s Senate hearings which resulted in the creation of the self-censoring Comics Code Authority which ended up destroying the EC line.

Publisher Gaines has a bit to say about all that, along with thoughts on censorship in general, in a 1991 interview here published for the first time. Elsewhere, he is disarmingly honest: to the question “What do you think of the current crop of comics?” he answers, “I don’t know… Once I got out of [publishing] comics, I stopped reading them and I don’t have any idea what’s going on.” This is a fairly remarkable statement, given that such titles as Watchmen, V for Vendetta and Sin City were being published at this time, along with early Vertigo and Image titles.

Elsewhere, topics range from early artistic influences to the everyday details of comics production to funny anecdotes about the annual vacations taken by the whole EC office. Many of the artists talk about the other artists interviewed in the book. Joe Kubert talks about working with Harvey Kurtzman in 2011, while Harvey Kurtzman fields questions from a live audience in the course of his 1982 onstage interview, touching on topics as diverse as Art Spiegelman and art-comics like Raw. Frazetta’s brief interview focuses entirely on fellow artist Roy Krenkel. John Severin has much to say about the military comics he drew for such titles as Frontline Combat and Two-Fisted Tales, and the various clashes of aesthetic (and history) that inevitably result from the fictional depiction of war.

Besides all this conversation, a mention must also be made of the illustrations. Often enough, they are examples used to illustrate a particular point being made in the interview itself, and even a cursory look through the book shows an impressive array of subjects, styles and approaches. There is a plethora of panels from EC’s famous horror and science fiction comics, as well as copious illustrations from Mad, Cracked, and various men’s magazines; there are naughty cartoons and full-color cover reproductions. There are no full stories reprinted here, and very few sequences of panels. The emphasis is on the image, not the story.

That’s just as it should be. These are interviews with artists, after all (or writer-artists like Feldstein), not writers. What the illustrations do is isolate these images as miniature art works in their own right, while the interviews illuminate something of the process that went into creating them. As such, it’s a fascinating volume for anyone with an interest in the process of comic creation, as well as anyone curious about the historical phenomenon of comics in America. EC remain a milestone in comics history, and they are unlikely to be surpassed anytime soon. As George Evans puts it, “Somebody put out a book where it said that there are only seven original plots in the universe. It’s what you do with those seven original situations that makes the difference.”