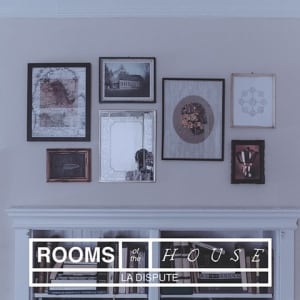 [xrr rating=3.75/5]Hyper lyricism is a common trope among the great albums released so far this year. We’ve had Sun Kil Moon’s brilliant ramblings on Benji, the blunt and decimating poetry of Perfect Pussy and now post-hardcore outfit La Dispute have released their third album, Rooms of the House, filled to the brim with unsettling and decimating stories.

If you’re looking for La Dispute to rival their near flawless Wildlife you’ll be disappointed. That 2011 masterpiece is still La Dispute’s finest work and rarely does Rooms of the House reach the same potent heights. That’s not to say it doesn’t come close. Rooms of the House does hold one of La Dispute’s most soul wrenching songs in “THE CHILD WE LOST 1963,” which starts with a stillbirth and ends with “Grandpa got hospice sick and he couldn’t fall asleep.” “THE CHILD WE LOST 1963,” despite its breathtaking sorrow, is only a diversion from the main concept of a relationship slowly crumbling. This central theme serves as both a strength and a weakness. In the weak corner it limits Jordan Dreyer’s lyrical content. Dreyer is at his best while jumping from topic to topic between songs. In the Post-Hardcore world no one can describe a scene like Dreyer, from tornado warnings to drive-by shootings, but when he keeps coming back to decaying romance his stories can become meaningless.

La Dispute is usually a band that can pull off a heavy-handed song but “For Mayor in Splitsville” is overblown to an unsalvageable point with Dreyer muttering, “Funny what you think of in the wreckage,” while uninspired instrumentation plays on. When La Dispute return to ending relationships, the instrumentation seems more restrained, which is a shame. “Woman (In Mirror)” keeps threatening to burst into something great but it never does, it feels uncomfortably contained.

But when La Dispute kick into high gear they can’t be stopped. “Woman (In Mirror)”’s sister track, “Woman (Reading)” does explode into a thrilling ending. Dreyer’s powerful vocals make up a good part of these songs’ energy, but you can never underestimate the rest of the band. Guitarists Chad Sterenberg uses his instrument like a weapon on songs like “HUDSONVILLE MI 1956” and “Stay Happy There.” He’s not interested in flashy solos; instead, his guitar crashes down like a wall of dissonant noise. Brad Vander Lugt has always been one of the tightest drummers in the genre and Adam Vass’s bass gives a dark and gritty edge to the low end of these songs. Still, everyone here is combining their forces to tell stories. Interwoven with the dying relationship are tales of man meeting nature at its most terrifying. Dreyer becomes the narrator for natural disasters, and when he screams “I swear I saw lightening in your eyes” he might be talking about himself. His voice rains down like a fierce storm on these tracks. Opener “HUDSONVILLE MI 1956” has Dreyer describing the events surrounding a massive tornado singing, “And the glass starts to rattle in the window.” It wouldn’t be surprising if his voice could rattle and shake entire houses.

The song that holds it all together is the lead single “Stay Happy There.” It’s Dreyer opening a boiling and emotional rant towards a significant other. But more than that it mentions rising winds, suicide warnings and traffic backing up on I-35 (which is visited in absolutely devastating detail on “35”). He also screams about wolves overrunning the deer population and dozens of other deathly visions over stormy instrumentation. His last strained words are “Everything is happening at once.” Those words describe La Dispute’s music fantastically well—the band members act as avatars making imprints of terrifying, but often life-affirming, events.