For a few years, we didn’t have my mother-in-law’s telephone number. She lived in Asia, sending fading, short emails when it suited her. She forgot birthdays, decided to see the pyramids in Egypt rather than come home and spend the holidays with us. Although it pained my wife, this curt dismissal was not out of character for her mother. In many years, it was for the best that she stayed away.

Ingmar Bergman tackles a similar predicament in Autumn Sonata, his 1978 chamber piece starring Liv Ullmann and screen legend Ingrid Bergman in her final film appearance. Hauntingly filmed by Ingmar Bergman’s frequent collaborator Sven Nykvist, Autumn Sonata strikes a similar vein as Cries and Whispers. It is the story of a family where past trauma has snaked its way into the present, rifts and trauma worsened, not healed, by time. Ullmann stars as Eva, a middle-aged woman who invites her mother, Charlotte (Bergman), to visit her and her husband on their remote estate. Eva is a bookish journalist who is still suffering from the loss of her young son, Erik, who drowned just shy of his fourth birthday. Charlotte, a world-famous pianist, hasn’t visited in seven years, meaning she wasn’t present for either Erik’s birth or death.

At first glance, Eva and Charlotte are thrilled by the reunion, even though Charlotte is mourning the recent death of her lover. But this is Bergman and other the film’s brief running time, Eva launches a venomous attack on Charlotte, returning the unwitting woman to the scene of the crime: Eva’s neglected girlhood. Eva is not only bitter with Charlotte for her absenteeism in Erik’s short life, but also how Charlotte’s career always came before Eva, her father and her sister Helena (Lena Nyman), who is now dying of a degenerative disease. 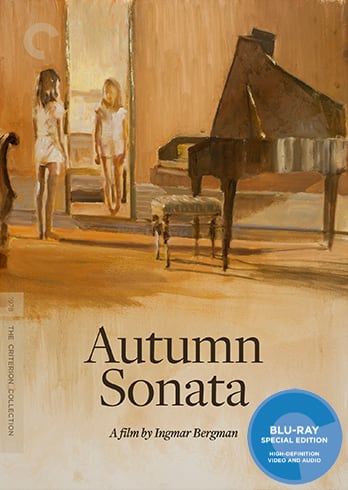 My wife’s father died when she was nine and her mother sent her away to boarding school shortly after. Charlotte spent much of Eva’s childhood on tour, neglecting her children and cuckolding her husband (Erland Josephson). Charlotte can remember which piece she played on any certain date, but her recollection of Eva’s childhood is murky. Charlotte is a narcissist of the worst kind, arriving at Eva’s house with a burst of bravado in designer clothes and wielding stories of all her exciting engagements. The tension appears almost immediately when Eva, a novice musician, tells her mother about some local concerts she has played. Rather than honor her daughter’s success, Charlotte immediately ups the ante by talking up her own recent successes.

The pain on Ullmann’s face speaks to years of torment. Quite often beautiful in Bergman’s films, Ullmann shrinks into her role, cowed by low self-esteem and the tyranny of her mother. Eva cowers her way through the first part of the film until she finally bursts and lets loose on her mother. Charlotte is also shaken by the presence of Helena, who is confined to bed, her frail body ravaged by disease. Eva didn’t tell her mother that Helena was there, knowing full well that Charlotte wouldn’t have come if she had known.

This isn’t to say that Charlotte is a horrific monster. Bergman humanizes the mother, showing a woman wracked with emotion and even requiring sleeping pills to rest easy at night. At one point, as Eva force feeds the past to her horrified mother, Charlotte exclaims, “I’ve always been afraid of you…I was afraid of your demands.”

Not everyone is meant to be a parent and Autumn Sonata deftly shows the damage that can occur when such a person has a child. Being a Bergman movie, it doesn’t end with Charlotte and Eva hugging it out. Besides, can such past neglect really ever been forgiven? My wife once told me that she had placed her head on her mother’s shoulder during her father’s funeral, seeking comfort. Moments later, her mother gently, but firmly, pushed it off.