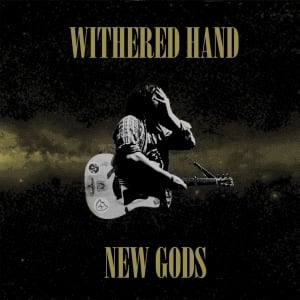 [xrr rating=3.5/5]The process of advancing unimpeded through time, the years piling up in your wake, is a sobering experience. Taking the time to truly zero in and face the nearing red light can be downright soul-crippling. But with New Gods, Dan Willson’s sophomore album as Withered Hand, it’s ambivalence, the milieu of confused feelings in dealing with one’s past and narrowing future, that define the mood. The tumult of childlike naiveté, spiritual yearning and cynical regret all have their say in this conflicted record, making it far more interesting than your obligatory record of an aging songwriter grappling with mortality.

Impish whimsy opens the record in “Horseshoe,” which manages to both disarm the listener and establish the forthcoming dynamics. With his softly cooing voice, Willson creates a narrator so unsure of his own abilities, he attributes any success he encounters to a supernatural element rather than an innate aptitude. A beleaguered mindset in a tug of war with idealism is supported by the driving but ramshackle alt. country melody full of sidewinding guitars and flaring piano notes. “Tell me was it easy to be pretend that nobody is dead?/ That nobody you love will ever die?” Willson sings, the first appearance of a sadly beautiful motif reminiscent of Sparklehorse or Vic Chesnutt. While “Horseshoe” kicks things off with a bang, successor “Black Tambourine” best represents the album’s vacillating perspective on the inexorableness of time. It’s at once pessimistic and celebratory, questioning identity yet finding solace in the light of another’s smile, supported by incendiary guitar work and hammering drums.

The waltzing ballad “Love Over Desire” is Willson at his weariest and wryest, guilt-ridden lustfulness bemoaning the coffin of monogamy. He follows this up with the caustic barn-burner “King of Hollywood,” in which he levels sarcastic putdowns of materialistic glam and glitz amid galloping percussion and a fluttering accordion. The real stunner of the record, though, is “California,” arriving smack in the middle. With its apocalyptic grandeur, it has the feel of thunderheads rolling in over a desert twilight. “In California/ I keep sippin’ on the Tussin like I’m sick again/ Boom/ White light, white heat/ All night/ Heart beating in my chest like a kettle drum,” Willson sings, quoting the Velvet Underground a bit. His expression of jadedness comes with whips cracking around him, California the titular state standing as gilded myth that turns out to be a lie. So powerful is this account of an existential crisis that in some ways it overshadows the rest of the album.

Perhaps aware of this predicament, Willson switches his paradigm with the second half of the record. Side B is decidedly darker and more pensive in tone, the tunes more muted and mostly acoustic. There is a degree of monotony at first, and repeated listens are required to fully appreciate all these songs have to offer. Willson’s narrators take on the role of an elder sage reflecting through dusty eyes, delivering a stream of quotable couplets that could have been platitudes, but are given emotional resonance by their context. “Some hearts remain broken/ And some hearts they do mend,” Willson sings plaintively in the swirling “Between Love and Ruin,” horns lightly bleating in the background as the guitar strumming builds in its wounded resolve. Most memorable is Willson stating with grim fortitude “I want to give up the ghost/ But the ghost won’t give up me/ So easily” in the succinctly titled “Life of Doubt.”

Like a spike in a flatline, “Heart Heart” emerges with some rocking tendencies, but it feels token. Whatever bad taste it might leave is quickly flushed out by closer “Not Alone,” which brings New Gods through the dark night of the soul to wrap it on a hopeful note. Jazzy organ and a New Orleans-style horn section cascade through the song, sending the affair out with gusto. In “Black Tambourine,” Willson belted out “When you tell me you’re lonely/ Isn’t everyone lonely?; “Not Alone” answers that query in surprisingly consoling fashion.