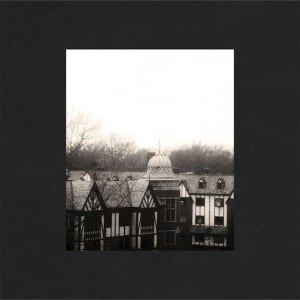 [xrr rating=3.75/5]Cloud Nothings may have the most deceptive name of any contemporary band. Rather than possessing the ephemeral or vapid quality suggested, their work is brutal and pummeling. Here and Nowhere Else, their fourth album, displays this in unforgiving fashion. Against a noise rock template, it comes across as a concept album of a man imprisoned in a concrete cell, going mad and blowing apart the walls of his confinement. The instruments sound as though they are trying to beat one another into submission—rapid-fire drums, guitar lines that blast through cinder blocks and bass lines to melt the rubble abound. Yet while the music is an assaultive din, it’s not just for the sake of being so—the band’s maestro, Dylan Baldi, scripts pointed, confessional lyrics dealing with the uncomfortable terrains of mental illness and psychological torment, but with a thematic dawning of awareness advancing throughout.

On just about every song, melody emerges to make the most abrasive Chore-Boy-scrubbing-to-the-face attack palatable. With hook-laden refrains, pop devices rise up from the pandemonium. Even as Baldi’s vocals slobber and foam, the cadence of what he’s spouting has a way of getting stuck in your head, which is a laudable achievement in such a form. This is the balm that makes the album so captivating to an audience beyond the noise rock contingent, as there is hardly time to catch your breath between cuts. Opener “Now Here In” sets the jackhammer percussion and roiling guitar going, the thick production standing out as an essential element, for scarcely has muddiness sounded so deliberate an enhancing aesthetic rather than a limitation. “I can feel your pain and I feel alright about it,” Baldi sings in the refrain, reciting it as quickly as he can and getting more venomous with each delivery, a tactic he repeats in most of the songs.

The midtempo “Psychic Trauma,” the third cut, teases listeners with a respite via its legitimately pretty guitar tone and Baldi singing more smoothly than normal as he assess a mundane existence. It amounts to misdirection, though, as 45 seconds in, the percussion clamors up in a race against a frenzied guitar, emulating Dinosaur Jr. to a degree. The next two tracks, “Just See Fear” and “Giving into Seeing,” are complementary sister cuts (as the names imply), though the latter is superior. A vaguely surf rock bass line duels with a whirling guitar part in the intro, before the tune grows into one of the most unhinged tracks on the record; Baldi shouts “Say something/ It’s supposed to be true” with all the rage of having youthful idealism squandered in the light of reality.

The final two tracks are the combined highlight of album, particularly seven and a half minute-long “Pattern Walks.” With its gutter rumbling low end and distant, more tempered vocals on the verses, it has a paranoid and unnerving vibe, making it one of the more nuanced numbers. “I’m moving forward while I keep the past around me,” Baldi sings, giving voice to the theme of being condemned to a cycle of destruction. Halfway through, a scratchy fade-out begins, then morphs into a spinning, hallucinatory outro. It’s here that the record reaches its zenith, Baldi attaining self-realization and a transcendent moment. The drums keep coming heavy and the guitars don’t relent, but they’re joined by glimmering backing ambience as Baldi sings in a loop “I thought/ I thought I never would remember.” That epiphany feeling continues into the closing song, “I’m Not Part of Me,” a borderline optimistic shift occurring and symbolized in the clearer vocals and more streamlined melodic elements. “I’m learning how to be here and nowhere else,” Baldi sings, giving the album its title, “How to focus on what I can do myself.” The maturation and sense of moving on contrasts with the fatalism in the first half of “Pattern Walks,” for “I’m Not Part of Me” imparts acceptance and resolution as necessary steps on the road to personal progression. As such, it wraps the album in fine form. Yeah, there is some redundancy and a lack of variety across the album, but at just eight songs, that is but a small gripe. On the whole, Here and Nowhere Else is a deftly executed and enthralling record.